When is the best time to go to the Galapagos? 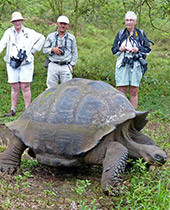 We are waiting with bated breath to return to the Galapagos, one of my very favourite places to explore. In a normal year, it’s possible to visit the archipelago at any time of year. We offer our exclusive full ship charter expedition cruises in February and October (or November), both good times for many of our travellers to escape gloomy weather at home. While the Galapagos are amazing at both times of year and offer stunning wildlife and scenery year-round, the islands do experience distinct seasons, so our two cruises can be a bit different too. Principally the differences pertain to the appearance of the islands, the breeding times of some wildlife, and the water temperatures. I would be hard-pressed to pick my favourite time of year! So I thought it would be helpful to point out some seasonal highlights from my past expeditions.

Option 1: February
This falls during the hot and rainy season (which generally runs approximately January through April). Overall, the weather is sunny and therefore warmer. With more evaporation, and heat building during the day over the larger islands, afternoon showers or even downpours are possible there.

Photo above: A dramatic downpour falls upon Chatham Island. I took this photo in February 2013 from our vessel looking back at our landing site shortly after we returned from a land excursion.
The regular rain has a dramatic impact on the deciduous forest trees of the lowlands. Forests that previously were dormant and barren-looking can wear a fresh look.

Photos above: A comparison of lowland forest at a site on Santa Cruz Island in November 2012 (left photo by Jean Iron) versus February 2013 (right, by Justin Peter).
With the rains, the blooming of many lowland plants will peak, including the ubiquitous Giant Prickly Pear cacti:

Many songbirds such as the famous Darwin’s Finches begin their breeding season and so we can hear the males singing. Almost all other birds of particular interest are there with one exception (discussed below).

The equatorial sun can get hot during mid-day. We time most landings to be in the morning and in the late afternoon, so we aren’t on land during peak heat hours. We’re generally back on the vessel where temperatures are moderated by the surrounding sea and we can be completely in the shade if we choose. Mid-day gives us time for a refreshing break as we re-position during the hottest hours.

Judy and Brian stayed cool and caught up with their travel log aboard at mid-day.
Snorkeling is a fun and surprisingly rewarding element of our expeditions and is also influenced by the seasons. With weaker winds during this season in February, cool deep ocean currents mix less with shallower waters. The strong tropical sun heats the surface well and it’s generally quite pleasant to swim or snorkel without a heat-saving wetsuit during this time.

Photo above: John and fellow explorers about to take the plunge without wetsuits! Note however that we wear shirts to protect ourselves against the strong equatorial sun (credit: Teresa D.)
Option 2: October/November
These months fall squarely within the cool and dry season. Skies are generally cloudy in the mornings with sunny breaks increasing in the afternoon. Although it seems a paradox, rain is scant, although there can be a very fine mist in the mornings. The lack of rain in the lowlands gives the forests a barren appearance, which is eerie yet beautiful. Together with the clouds, this can make for some dramatic scenes and photography.

Photo above: A moody view of a hillside on Floreana Island during early November (credit: Justin Peter)
The prolonged dry period causes the leaves of the widespread succulent Galapagos Carpetweed – that cloaks shallow soils in shoreline areas – to turn from green to bright red, which can also make for interesting dramatic scenes.

The days-old pup above was on the beach at Barrington Bay on Santa Fe Island. Its mother had returned to the sea to fish. Although we always see pups on tour, we can usually see numbers of recent newborns at this time.
October and November are also when we can see the Waved Albatross at their colony on Hood Island. These impressive seabirds breed only here and require consistent breeze to stay aloft as they come and go from their nesting site. Undependable winds in February keep them at sea elsewhere.

Photo above: Waved Albatrosses will fly directly overhead! (credit: Josh Vandermeulen)
As for water temperatures, they are consistently cool. A wetsuit is a must for any prolonged swimming or snorkeling. We provide complimentary wetsuits for loan on board our vessel.

Wetsuits are available for all our snorkelling excursions (credit: Debra W.)
Wetsuits mean a few extra minutes of pre-snorkelling preparation but the rewards can be amazing! I videotaped this Green Sea Turtle in November 2014 while snorkeling in the cool water off Floreana Island:

How to decide?
Either time of year guarantees mind-blowing wildlife encounters, amazing habitats and landscapes, and the feeling of all-round exploration and discovery. There are some nice consistencies too; for instance, the windward side of the highlands we visit on larger islands can stay damp year-round and vegetation will be vividly green there, and virtually all the wildlife species that interest us are year-round residents. So, unless there is a very specific phenomenon that you’d like to observe, you will find much to enjoy either way. Occasionally nature throws a “curve ball”. In an El Niño year, we can expect more rain during the hot and rainy season, and and so luxuriant vegetation in February. Conversely, in a La Niña year, the February landscape can look like resemble that of October/November as rainfall is below expected and occasionally absent.