Discovering Gems in the Canadian Arctic 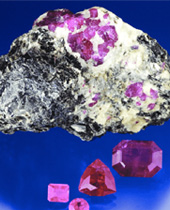 I first experienced the north in 1980 as a geology student exploring for lead and zinc in the Yukon. Each day I would be dropped off by helicopter in a remote location and would hike as many as 10 km, prospecting and sampling while navigating by map and compass, avoiding bears, and hoping to be picked up again at the end of the day. The experience left me wanting to see more of the North. However, other jobs and graduate school kept me away from the north until 1992, when I initiated a research project on granitic pegmatites (global sources of rare metals) in the Yukon and western Northwest Territories. This project has resulted in a much better understanding of how these unusual rocks form, and it continues to this day.

However, my main focus changed in 1998 when one of my former students discovered emeralds in the Yukon Territory. This was tremendously exciting because, for a time, it looked like it would become Canada’s first emerald mine. Studying that deposit led to the realization that coloured gem deposits are rare because they represent unusual geological conditions; for example, emeralds require beryllium as an essential component and chromium or vanadium to impart the green colour, but these elements rarely meet. Despite their scientific interest, very little research had been done on coloured gem deposits up to that point, something I resolved to change.

Vivid blue spinel with white carbonate in calc-silicate rock, Kimmirut area
(Philippe Belley) and a cobalt-blue spinel gemstone, Kimmirut area.
Credit: B.S. Wilson
My students and I have spent the years since 1998 studying emerald in Yukon, Ontario, and Nunavut; ruby in British Columbia and Greenland; and other occurrences (along the way we also started a successful consulting company, but that’s another story). The highlight of our gem research has been our work on Baffin Island, which began with the discovery of sapphire in 2002. It took many years to determine how they formed, but we finally published the definitive paper in 2016. Coincidentally, this happened the same week that our Governor-General presented the Snowflake Brooch (composed of Baffin sapphires and Canadian diamonds and gold) to Queen Elizabeth II to mark her Sapphire Jubilee. This coincidence led to a great deal of welcomed media attention. Since then we have concentrated on gem spinel, including spectacular cobalt-blue spinel, on Baffin Island. Our research suggests that there is much left to be discovered and gives us clues on where to look.

I am very much looking forward to being a Study Leader on board the RCGS Resolute during its traverse of the Northwest Passage; I hope to communicate my enthusiasm for the North and its geological heritage. I’m also looking forward to seeing parts of the Arctic that will be new to me. There is much about the North that I find addictive besides rocks, such as the increased energy in the long days of summer, the clean air, the liquid quality of the light, the companionship of the field camp, and the fascinating and generous people I have encountered along the way. I think a part of me will always reside “north of 60”.
Webinar Library