Zebras: Not All Painted With the Same Brush 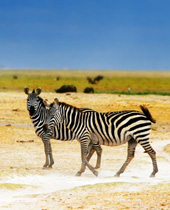 While an almost ubiquitous feature of television wildlife documentaries filmed in sub-Saharan Africa, zebras generally play no more than a supporting or background role to their larger, fiercer or more abundant neighbours. Perhaps their resemblance to horses renders them too familiar to be generally considered as 'serious' lead players. Regardless, they possess their very own innate interest and the diversity that they represent is something I had cause to ponder on my travels to South Africa and Namibia last year, and now once again as I look ahead to our upcoming tours. One thing of particular interest is that there are three quite distinct species of zebra. They are distinguished by their distributions, behaviours and habitats. They also differ widely in abundance and are surprisingly distinct in appearance too.

If you have participated on one of our Serengeti Migration safaris, you would have seen the Plains Zebra. Also commonly called the Burchell’s Zebra, this is the prototypical “safari zebra” featured on television. It enjoys a wide distribution from Ethiopia in the northeast down into northern South Africa and Namibia.

The Plains Zebra generally occupies extensive grassy plains (as the name suggests) and recent total population estimates put it at 666,000 head, with 151,000 in the Serengeti alone! If you’ve visited Etosha National Park in Namibia or Chobe in Botswana, you have seen the same species but with some notable differences. This is because there are actually five subspecies of Plains Zebra in different parts of the range, and those in the far south tend to have reduced striping on their legs (and sometimes the belly) in addition to a peculiar “shadow striping” effect on the rump, evidenced by faint, narrower brown stripes alternating with the expected black stripes.

The second species is the Grévy’s Zebra. The largest of the three species, it is indigenous to Kenya and the Horn of Africa where it generally inhabits more arid habitats than the Plains Zebra. At first glance it resembles a Plains Zebra of the Serengeti but it stands out by its very large ears, its tall erect mane and especially by its coat; its belly is conspicuously white and the rest of its coat is adorned with a higher density of stripes, the highest in fact of any zebra species. Also, the stripes in the neck are consistently broader than those on the rest of the body.

It also possesses a single, heavy black stripe running lengthwise down the top of its tail and surrounded by fine concentric stripes. Here are photos of Grévy's and Plains, for comparison.

This combination of features makes for a particularly striking appearance that has also made it the unfortunate target for skin collectors. As result of this and competition with livestock operations, Grévy’s Zebra is currently limited to just fragments of its historic range where it numbers perhaps 2,000 animals and is considered endangered.

The third species and perhaps the least well-known is the Mountain Zebra. It ranges in western Namibia and the Cape of South Africa where – as the name suggests – it typically frequents mountainous and escarpment country. It is represented by two recognized subspecies, the Hartmann’s Mountain Zebra in the north and the Cape Mountain Zebra in the south. There are subtle differences between them but what they have in common is a clear belly and, in a reverse situation to the Grévy’s, broader stripes on the rump; these are so large as to be conspicuous even at great distance.

A couple of other foolproof (and intriguing) identification traits are visible only at close range. Mountain Zebras have a dewlap on the neck’s lower surface. Unique among the zebras, the dewlap presumably would help the animal to maintain an even body temperature in hot weather. The second trait is the pattern of stripes leading into the tail; rather than one or a few long stripes running lengthwise into the tail, there is a peculiar “grid iron” pattern of cross-wise stripes forming a triangle above the rump and parallel to the tail stripes.

Mountain Zebras as a whole number about 9,000 individuals but the Cape subspecies is just a fraction of that at perhaps 500-700 individuals. Although this is a comparatively tiny number, it is a vast improvement from the all-time low of eleven individuals in the first part of the 20th Century! This remarkable recovery is a testament to some dedicated conservation efforts in South Africa where it has been re-introduced to some former haunts. One of these places is West Coast National Park. We look forward to seeing Cape Mountain Zebras here during our Best of the Cape tour next August and September as they graze amidst swaths of spring flowers. I invite you to view a short, informative slide show for the tour by clicking here.
FULL WEBINAR LIBRARY