Up-close and Personal with Big Cats in Tanzania 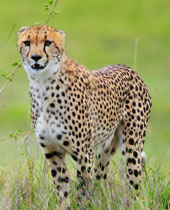 Having lived with our house cat for nearly 20 years, I watched how he stalked his prey even if it was just a spider walking across the floor. In Tanzania, I was really keen on seeing some of his much larger cousins in their natural habitat.

There are large cats in all of the parks and conservation areas we visit in Tanzania, but as our head local guide and driver Shaba said to me, “Ndutu is the place we’ll see cats”. Ndutu is in the southwest part of Ngorongoro Conservation Area, and is a combination of wide open savanna and treed river valleys.
There were two full days allotted for touring Ndutu – lots of time to check many areas for cats. We easily found a pride of seven Lions as they were walking along a river valley towards a thick stand of reeds. As they strolled along almost in single file, they simply vanished into the two metre high reeds. We repositioned our land cruiser, and there they were, lounging, but camouflaged by the same coloured reeds. A flick of the tail signaled their position.

After we left the Lions we drove through the treed areas scanning the trees for lumps. During daylight hours, Leopards retreat to the tops of trees to sleep. With seventeen sets of eyes checking the trees, it was not long before we found a female Leopard with her year-old offspring. They had both found the perfect orientation of branches to stretch their long bodies out and enjoy their siesta.

Our cat highlight had to be the pair of Cheetahs that were stalking a Thomson’s Gazelle. Both cats started their hunt maintaining a low profile in the short grass. The closer they got to the gazelle, the more prone they became. Slowly, step-by-step they approached, and finally one of them made its move. Cheetahs are the fastest land animal, but given that the gazelle had a head start, the gazelle easily survived this encounter. There were a number of vehicles watching this event and instead of the cats walking off and resting in the grass, they ventured over to the vehicles. Shaba said “Everyone, if we are really quiet they may come over and climb onto our vehicle”. They checked out a couple of parked vehicles and even though it was not our vehicle, up onto the hood and roof they went. One of the vehicles was a Quest land cruiser and those participants had a close-up, memory-for-life experience.

As special as this experience was, on our way back to the lodge we discovered a female cheetah with five adorable one month old kittens. Check out those faces….

The national parks and conservation areas in Tanzania are spectacular. From the thick jungles of Arusha National Park to the wide open vistas of Serengeti National Park, there is flora and fauna to satisfy everyone’s interests. Please join me for the 2015 Tanzania Safari tour for your own personal and maybe up-close cat experience. The elephants, zebras, wildebeest, and giraffes are all a bonus!
Webinar Library