By: Mike Kent
One would expect that the insect named after the demi-God Hercules would have the rightful reputation for super-strength. After all, it has been touted to be able to carry up to 850x its own body mass.

Hercules beetles are a group of beetles in the Dynastes subfamily, which includes other hulking beetles like Atlas, Rhinoceros, Elephant, and Ox Beetles. The Hercules beetle group can be divided into 2 distinct lineages: the White Hercules Beetles and the Giant Hercules Beetles. Depending on who you talk to, there are anywhere between 3 and 15 distinct species within the 2 two lineages. White Hercules Beetles are comparatively smaller, and as their name suggests, often lighter-coloured beetles that range from southern North America and into Central America. Their more southerly cousins the Giant Hercules Beetles range from Central to South America, and the West Indies, and at more than double the size, they can truly impress, reaching up to seven inches long! 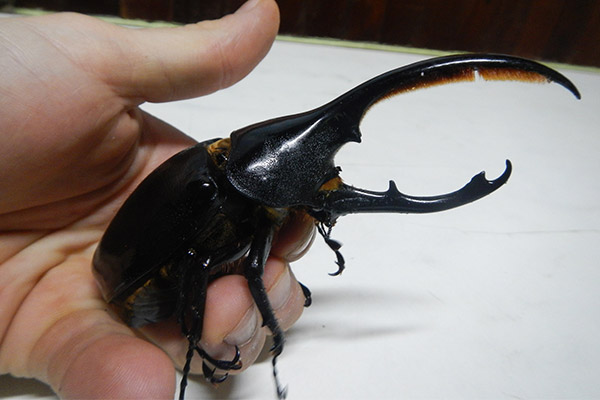 © Mike Kent
Like all beetles, Hercules beetles have chewing mouthparts and hardened front wings (elytra) that effectively turn them from formidable tanks to bumbling airplanes. They are sexually dimorphic, meaning males are quite different from females. Males have the characteristic horns. Despite their imposing appearance, Hercules beetles are harmless to humans. They don’t bite, sting, or have venom. They simply eat rotting fruit, tree sap, and decaying wood when not avoiding predators, laying eggs, or engaging in male-to-male combat. Unless you’re another male Hercules beetle, they’re gentle giants!

If you are male Hercules beetle, you’re an opponent, and must be ready to battle another male using your horns to fight another male for the right to mate with a female and/or own a high-prized feeding ground. Male horns are used for grappling in an attempt grab, pinch, dislodge, flip, and throw other competitors off a branch. During combat, males try to grasp adversaries between their horns in order to lift them into the air and throw them to the ground. The fight continues until one of the beetles is injured, retreats, or is left upside down and helpless. The successful male wins territorial or mating rights with the nearby female, yet the beetles remain polygynandrous (both male and female have multiple mating partners). 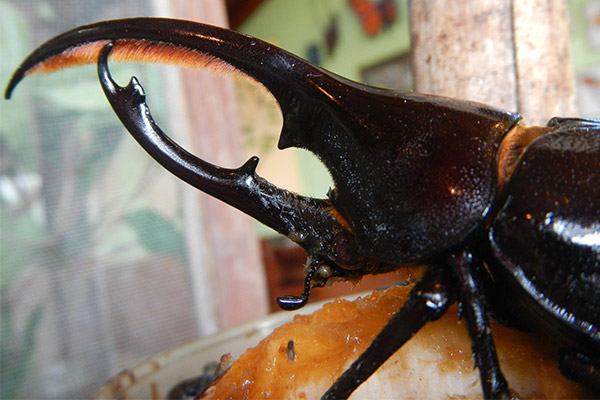 © Mike Kent
Horn size in males is variable. It can be related to how much nutrition the grub received while it was growing. While the size does matter, with larger horned males winning more battles, it isn’t the only determinant of success. Occasionally, when two large males are battling one another, a smaller sneaker male can come in and mate with a female while they’re otherwise preoccupied! 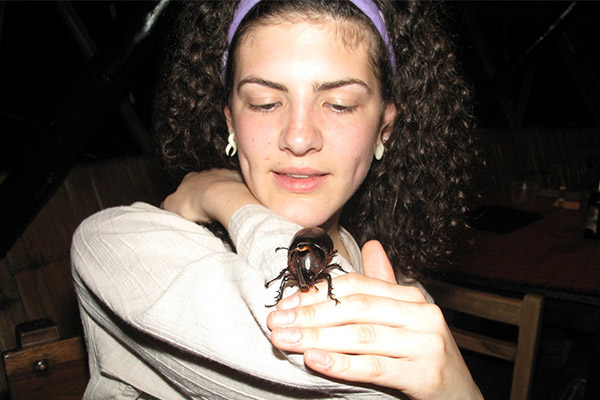 © Mike Kent
Beetles go through a metamorphosis similar to the caterpillar-to-butterfly story but less fabulous. Mated female beetles lay eggs directly into the soil. After hatching, grubs emerge to bulk up on rotting wood. These gargantuan beetles are equally (if not more) enormous as grubs, weighing more than a McDouble! One third of their body is basically full of feces and while that might not sound like a good thing, it actually is! That’s because, while a caterpillar will spin a cocoon out of silk that they make with their mouthparts, beetle grubs will construct a cocoon-like chamber using soil and their own poop! Thus their feces are put to good use. 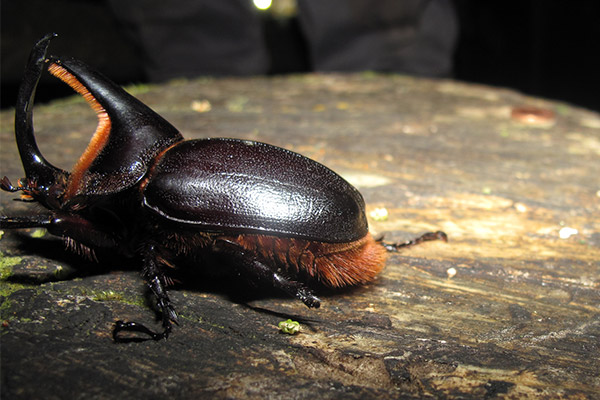 © Mike Kent
So are Hercules beetles actually the strongest animal on the planet? Measurements on a much smaller species of rhinoceros beetle shows a carrying capacity only up to 100 times their body mass, a point beyond which they can barely move (by the so-called square-cube law, a smaller insect is relatively stronger than a larger one). Second, in 2010, a new world's strongest beetle was officially crowned. The Horned Dung Beetle (Onthophagus taurus) was put to the test and confirmed to have pulled 1,141x times its own weight. It wouldn’t be the first time where a male’s strength has been overemphasized. Hercules beetles may be strong but just like all the stories of human champions, it is often those from humble backgrounds that take the top prize.

Hercules beetles are rare but possible to see on Quest trips to the Neotropics such as Costa Rica, Colombia, Ecuador, and Trinidad & Tobago. Though they live in mountainous and lowland rain forests, we are more likely to cross paths with them in areas with street or security lights. What a treat it would be to greet one of these gentle giants!
Webinar Library