Turtles Near and Dear, and Near and Far 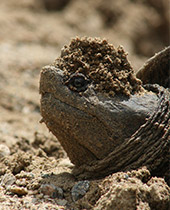 “Because they are still living, turtles are commonplace objects to us; were they entirely extinct, their shells – the most remarkable defensive armor ever assumed by a tetrapod* – would be a cause for wonder.”
– Alfred Sherwood Romer, American paleontologist (1894–1973)
A salty breeze tickles your cheeks as the first rays of light break the ocean horizon. In the dim light of dawn, you can just barely make out an unfamiliar shape. Out of the crashing waves emerges a hunched form. Then another, and another. As you break your gaze you realize that there are dozens already on land and more emerging from the water. No, hundreds. Maybe thousands! 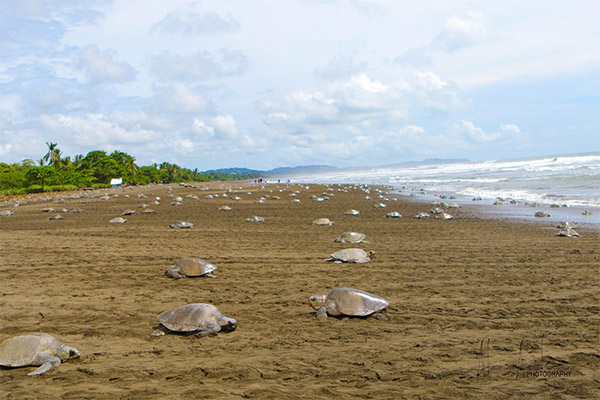 Olive Ridley Sea Turtles  © Alex Arias
Welcome to one of the greatest shows on Earth. We marvel at great migrations the world around: large mammals crisscrossing the Serengeti, the flight of the monarch across the North American continent, and the breeding crawl salamanders at your local pond. From the vast Pacific Ocean to the volcanic sand beaches of Costa Rica, the migration of the Olive Ridley Sea Turtle grips our imagination. Tens of thousands of sea turtles, each having traversed thousands of kilometres of open ocean over the past year, converge on beaches to join in an ancient ritual. The arribada, “arrival (by sea)” in Spanish, is underway. 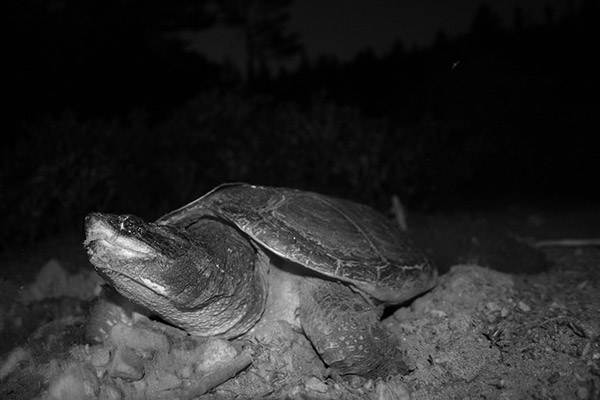 Snapping Turtle at her nest  © Patrick Moldowan
Perhaps, like me, you’ve watched in awe as a local turtle lumbered out of a wetland in search of a nest site. They tapped their nose to the ground, searching for environmental cues unknown, and scraped the soil, first with the forefeet, then with the hind feet. Maybe they acted like miniature bulldozers, pushing their head into soft ground, and tossing soil to and fro. After much restlessness they eventually settled in place and begin using alternative strokes of the cupped hindfeet to scoop soil. Into the sculpted nest cavity dropped the eggs, one-by-one, before being covered with care. Then it’s back to the water. Whaa-la! Now, with warmth from the sun and some luck that the nest will stay hidden from predators, the offspring will hatch after several months. All this completed without a female ever laying eyes on her eggs or eventual offspring. 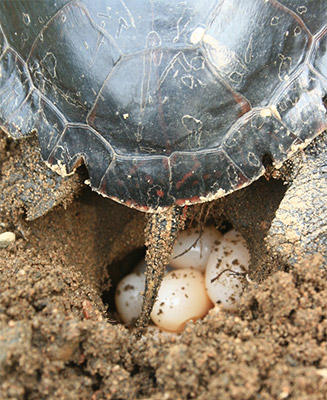 Painted Turtle nest © Patrick Moldowan
Spending time with a turtle gives a fascinating glimpse into their world, one that stretched back millions of years. Being immersed amongst hundreds or even thousands of sea turtles—that feels like pulling back the veil on another time and world! Such synchrony in mass nesting abundance, a product of interactions between internal cue of turtles and their environment, is a marvellous phenomenon that biologists are actively working to understand. Turtles are one of the most readily identifiable groups of animals and, as the opening quote speaks to, they are a cause for amazement and admiration. The colourful Painted Turtle and Snapping Turtle, a gentle giant of the freshwater turtle world, are close-to-home cousins of the sea-faring Olive Ridley Sea Turtle. Having worked closely with Ontario’s turtles for the past 15 years and explored the intricacies of their biology, I am so thrilled to share in the wonder of a sea turtle arribada. The combined pounding of surf and flippers on the beach will make for a visceral experience. Sand will be flying this way and that during one of the greatest shows on Earth! 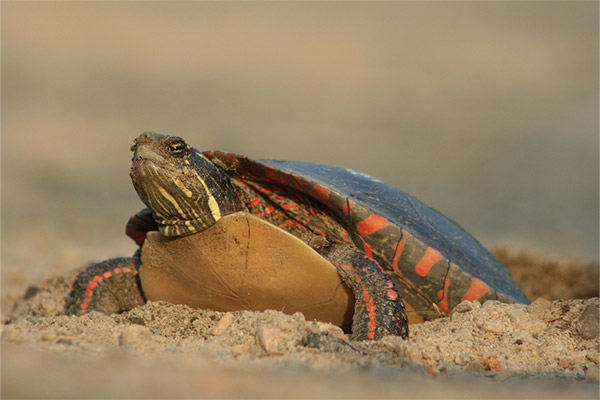 Painted Turtle  © Patrick Moldowan
Of course, turtles are just one of many draws to the beaches and dry forests of Costa Rica. There will be no shortage of time spent admiring the stunning birds and butterflies, monkeys, amphibians, and lizards, and so much more. I invite you to join me from October 14 – 21, 2022 for a visit to Costa Rica’s Northwest: In the Time of Turtles.
*Tetrapod: a classification of four-footed back-boned animals, including the amphibians, reptiles, birds, and mammals. From Latin (tetrapodus) and Greek (tetrapous), meaning “four” (tetra-) and “foot” (pous).
Webinar Library