The All-Female Band: The Coatis

By: Mike Kent
You’ve may have heard of all-female bands like The Supremes, The Spice Girls, and The Andrews Sisters. But have you heard of an all-female band called the Coatis? They are popular in the Americas, play at a wide-range of venues from small bars to big stadiums, and are versed in a variety of musical tastes from jazz to hip-hop. 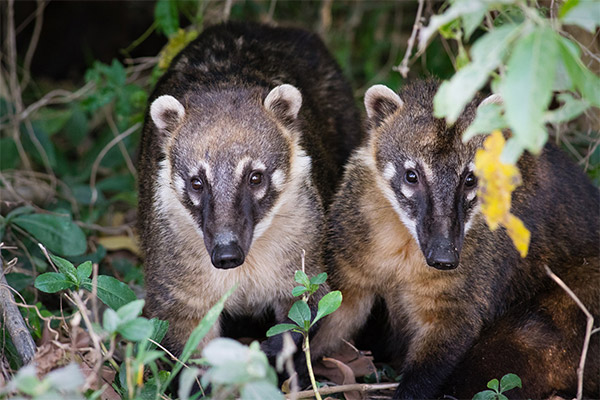 South American Coati, also known as the Ring-tailed Coati
Okay, just kidding, but coatis are common from Arizona to Argentina, occupy a wide-range of habitats from forests to grasslands, and have a highly varied diet with a taste for invertebrates, small vertebrates, and fruit. They also have an interesting social structure where females and their young form bands of 20 individuals or more, while the larger adult males are solitary.

There are two closely-related coati species: the White-nosed Coatis of the southwestern USA, Mexico and Central America, and the South American Coati, which occupies a vast area of the Amazon basis and adjacent regions. Both species are highly intelligent and adaptable members of the raccoon family that are well equipped for tree-climbing and ground foraging with long and mobile tails and snouts, double-jointed ankles, and powerful claws. 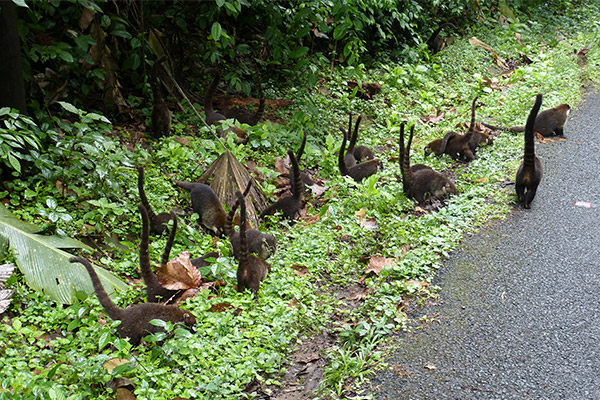 They spend the vast majority of the day rooting through leaf litter in a pig-like manner to unearth arthropods but turn almost completely frugivorous when their favourite fruits are abundant. They have also been known to engage in feeding behaviours like rolling tarantulas to remove their irritating hairs before eating, grooming ticks off tapirs, raiding sea turtle and crocodile nests for their eggs, and rummaging through human garbage. 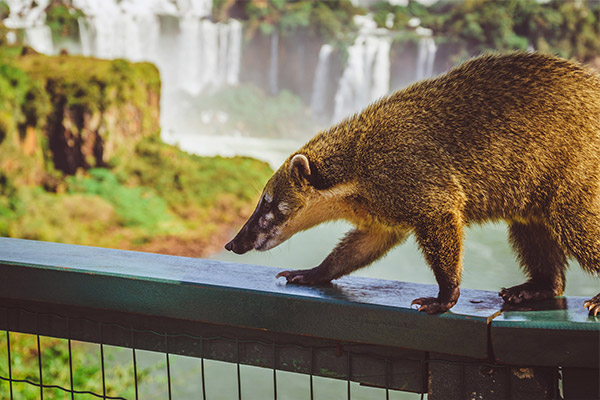 Coati near Iguazu Falls
Banding together has its advantages. Advantages may include safety in numbers, group protection, cooperative defense against predators, and less parasites through grooming. Grooming is also used by females to establish and cement bonds with other adult females in their band. Through reciprocal altruism, females all help each other protect and raise the young. Females are particularly aggressive towards males because males are known to attack and kill young coatis. It is only during breeding season when males literally groom their way back into the females’ good graces. Though smaller, studies have shown that compared to males, female coatis possess larger brains due to their greater sociality. It takes brain power to make and keep friends! 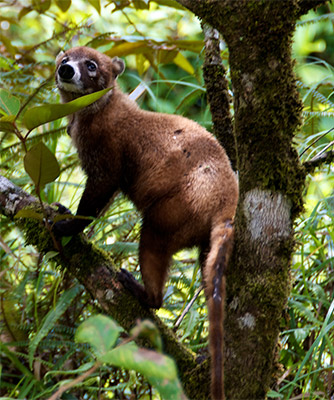 White-nosed Coati © Bruce Harlick
We have a chance to see the White-nosed Coati on our tours of Central America such as Costa Rica or Belize & Tikal. We can see its southern counterpart – the South American Coati – with greatest ease during our Brazil tour!
Webinar Library