Sovereigns of the South 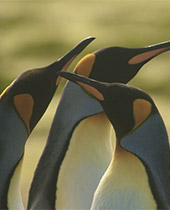 It would be an understatement to say that life in Antarctica presents some unique challenges to the wildlife that inhabits the coldest, driest, windiest and most inhospitable of the seven continents. Few species have risen to the challenge of adapting to these conditions quite the way penguins have. No wonder they have earned the monikers of Royals, Emperors and Kings. They rule this kingdom of crystal.

Penguins are colonial nesting seabirds, only returning to land to raise their young, gathering together in large colonies. Perhaps the most impressive of these colonies are the massive sprawling metropolis of the King Penguin. A sub-Antarctic species, the King Penguin inhabits many small islands in the Southern Ocean but the core of its range, its capital city, is the island of South Georgia. Here, congregations of up to two hundred thousand individuals, large enough to be seen from space, gather on the rocky flats to breed. 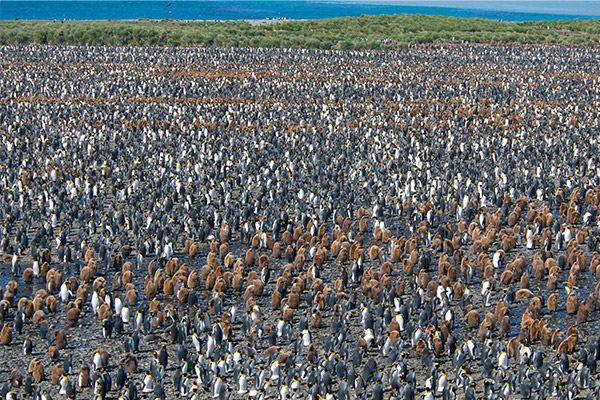 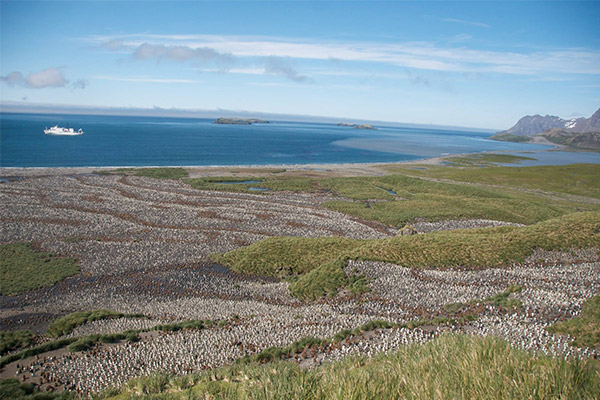 © Catherine Jardine
Standing at almost 1 metre in height and weighing upwards of 15 kg, the King Penguin, when first described to science in the early 18th century, was thought to be the largest penguin in existence. That assumption remained until the even larger Emperor Penguin was discovered decades later. Large body size is a distinct advantage for penguins, and all polar species, as it makes it far easier to stay warm in the cold polar seas. However, this large body size comes with some drawbacks, namely that it takes a long time to grow that large, and Antarctic summers are very short. 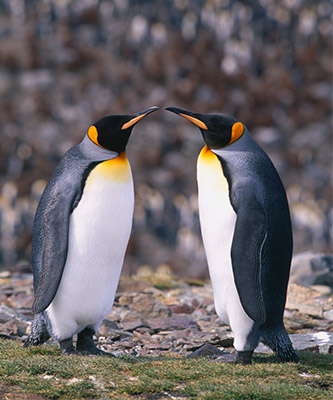 The Emperor Penguin is famed for braving the Antarctic winter, huddled on the sea ice, carefully incubating their eggs atop their feet. This strategy is an effective, if uncomfortable, means of extending the breeding season into the winter months, giving the chicks the extra time they need to grow to full size before the end of summer. King Penguins however, have developed an entirely different strategy to deal with the short Antarctic summers. Instead of the adults braving the frozen winters on-shore, the chicks do, all alone. 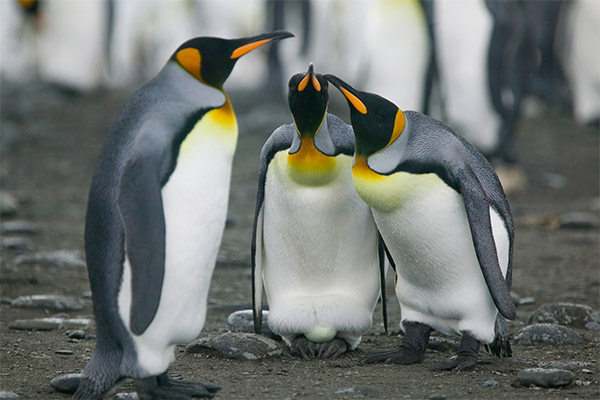 Though fear not – it’s not quite as macabre as it sounds! The little “princes” and “princesses” are given every luxury to prepare themselves for the task ahead. King Penguins lay their eggs in the austral spring, and they, like their Emperor cousins, incubate the egg balanced atop their feet wrapped in a warm pouch of skin and feathers. Unlike the Emperors, however, males and females share the task of incubation and trade off, passing the egg carefully from foot to foot, throughout the 54-day incubation and the 30 days after hatch. At that point, both parents will return to the ocean to forage, leaving the chick behind. But the chick is far from alone – there is always company in a King Penguin colony! The chick will join one of the roving mobs, known as crèches, of other chicks for protection and warmth. And there it will stay, for the next 10-13 months of its life, wrapped in a thick coat of dark brown down awaiting occasional visits its parents when they return to deliver food to their chick, locating it amongst the masses by their unique calls. Over the remaining summer months these provisioning visits will be frequent and the chicks will grow quickly and put on a substantial amount of weight, but not enough to reach independence. Then, over the winter months the visits from the parents will be far rarer, sometimes with 3-5 months between feedings, the chicks will suspend their development until the bounty of summer returns. This amazing feat means King Penguins require two summers to raise a chick, instead of one. 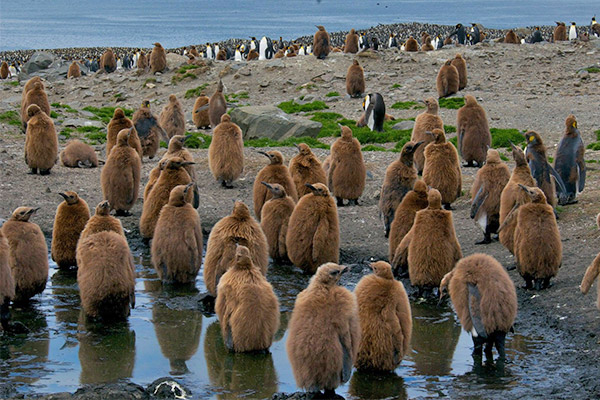 © Catherine Jardine
This is why – at any point of the summer at a King Penguin Colony – you can find a mix of incubating adults and giant, fluffy, teddy-bear chicks from the previous season. In fact, the chicks are so large and look so different from their parents in their winter coats that early naturalists thought that the two were different species! But eventually, upwards of 16 months after they were laid as eggs, the chicks will trade in their down for waterproof feathers and head to sea themselves, right at the peak of foraging season. Finally independent, the chick will stay at sea for 4 years before returning to the colony to produce its very own heir or heiress. 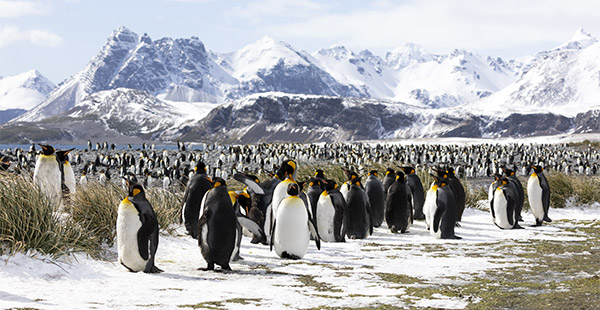 We expect to see some King Penguins in the Falkland Islands and many, many more on South Georgia during our upcoming Unspoiled Antarctica with South Georgia expedition in October 2022. Click here to learn more!
Full Webinar Library