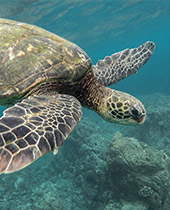 One of several sea turtle species, the Green Sea Turtle is cosmopolitan, found in tropical and subtropical waters. Even though the oceans are connected, there is one genetically distinct population of this species found in the Atlantic Ocean and Mediterranean Sea, while another is distributed in the Pacific and Indian Oceans. It is thought that the cold water at the southern tips of South America and Africa prevent these two groups from mixing. Their range includes the Galapagos archipelago but the ones there are a little smaller and darker than other Green Sea Turtles. They are often referred to as Black Sea Turtles or Galapagos Sea Turtles, though they are not currently afforded the status of a distinct subspecies. 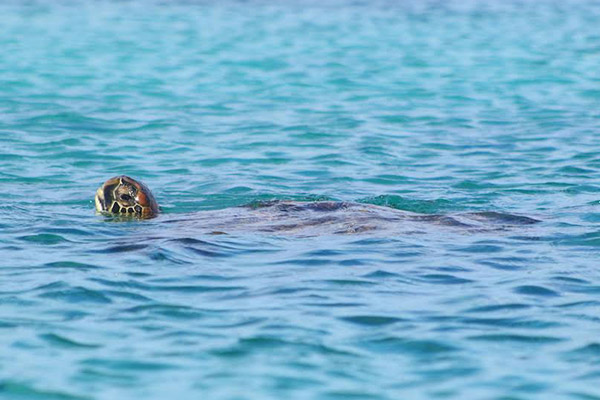 A Green Sea Turtle surfacing for air while basking just below the water’s surface
(Photo by: Patrick Moldowan)

Green Sea Turtles and their sea turtle relatives have evolved physiological traits that enable them to survive in their oceanic haunts. One challenge they face is maintaining an internal environment that has a lower concentration of salt than the ocean. To do this, a specialized gland in the orbital cavity produces concentrated, salty tears that are constantly excreted. Temperature regulation is another challenge; like many other reptiles, sea turtles are able to withstand swings in body temperature, while they are also able to maintain a body temperature about eight degrees warmer than the surrounding ocean. In the cool waters of the Pacific Ocean, Green Sea Turtles have even been observed basking at the water’s surface to warm themselves in the sun; this behaviour is rarely seen with other sea turtle species. 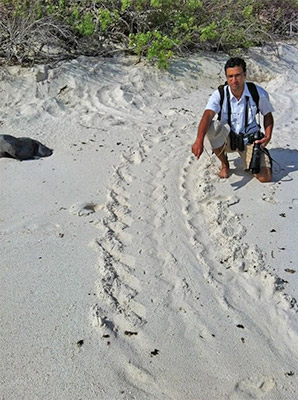 Justin examining the tracks left behind be a female turtle who came ashore to lay her eggs.
(Photo by: Catherine Eagles)

We can sometimes see the turtles during our snorkelling forays in the Galapagos
(Video by: Josh Vandermeulen) 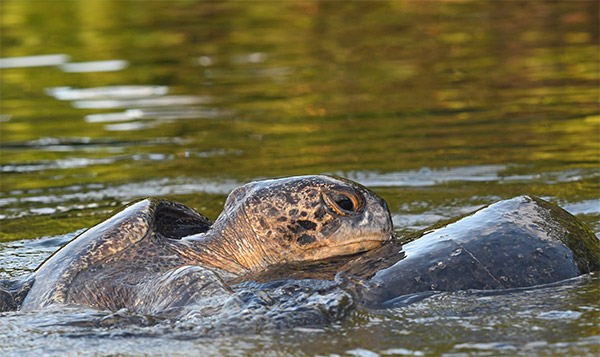 A male Green Sea Turtle resting his head atop the carapace of a female while mating. Our choice spot to witness this phenomenon is while floating quietly in Caleta Tortuga Negra (Black Turtle Cove) on Santa Cruz Island in the Galapagos. Here, the turtles come to mate, and to feed.
(Photo by: Josh Vandermeulen)
Given the Green Sea Turtle’s huge range, there is a chance to see it in various places. However, the Galapagos archipelago is our most reliable place, where we can see them basking, underwater during snorkelling expeditions, see traces of their beach nesting forays, and even see them mating!