A Desert Visit in the Yukon? 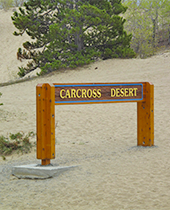 It might strike you as odd to learn there were a desert in the southern Yukon, and if you questioned the possibility, you’d be encouraged to be skeptical. That’s because there isn’t an actual desert there – at least not according to conventional scientific criteria. But that wouldn’t mean that there isn’t a place that doesn’t give the impression of a desert. In fact, the Carcross Desert – just by the village of Carcross in southern Yukon – is affectionately called “Canada’s smallest desert”. 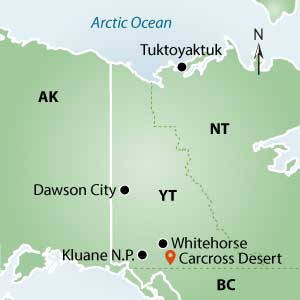 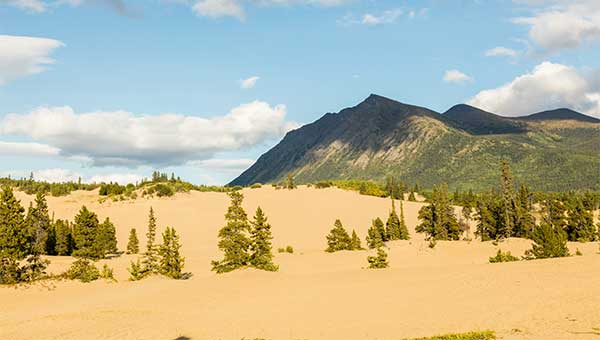 © Diego Delso
Appearing as a swath of little hills fringed and pockmarked by spruce and aspen, the area certainly appears inhospitable to plant life based on the sparseness of it. But the lack of vegetation is not due to rainfall levels, which provide the benchmarks for deserts, semi-deserts, and the like. In the case of the phenomenon at Carcross, it is the nature of the soil base itself that prevents vegetation from getting established in the first place. This “desert” of less than 3 sq. km in area in fact represents a set of shifting dunes composed of sands that once accumulated in the bottom of an ancestral lake that occupied the Carcross Valley following the end of the last Ice Age. As water levels dropped and sediment to the southwest of here became exposed, it was blown by the wind towards the northeast and began accumulating at the Carcross site. The poor nutrient content of sand and its shifting nature impede most plants from establishing successfully. The dunes are dynamic and continue to accumulate sand - Bennett Lake is a vestige of the ancient lake to the southwest and exposed sediments along its fringes continue to supply this material. The rainfall here doesn’t make up for the lack of useful nutrients for plants, but a small number of plant species find a welcome home here as the otherwise poor conditions keep competition away. The sun-loving Yukon Lupine is just one of these; with the ability to fix nitrogen directly from the air, it can circumvent the lack of nutrients in the substrate and succeed!

We get to see the Carcross “Desert” during our visits to the Yukon.
Join us for our next “Road to Tuk” trip in 2022 to see it with your own eyes.