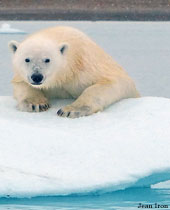 Polar Bears topped everyone’s most wanted wildlife list on the Worldwide Quest and Canadian Universities Alumni cruise to Canada’s Northwest Passage. Excitement erupted early morning on Day 3, August 27, when OneOcean expedition leader Boris Wise announced that observers on the bridge had spotted a Polar Bear. Our ship, the Akademik Ioffe, was approaching Coningham Bay on Prince of Wales Island, a well-known gathering place for Polar Bears and Beluga Whales. Anticipation mounted as we viewed a distant bear on shore. Someone shouted, “I hope we get closer.” A landing was not possible for everyone’s well-being, so zodiac cruising was the plan. One zodiac after the other, we sailed towards the first bear, getting good views, but still a little far. Then more bears appeared. A female with two cubs swam in front of us and came out on land. We watched quietly as the bears stood up and stared at us with great curiosity, trying to pick up our scent and figure us out. Walking slowly along the shore, they sniffed old Beluga skeletons. The young cubs rolled over, almost like they were playing, always under the watchful eye of their mother. Cameras had a good workout.

Across the bay, we noted another female with two larger cubs, probably about a year and eight months old, almost as big as she was, while another large bear rested on shore, oblivious to our quiet presence. One more bear swam with ease out to a small ice flow and stood on the submerged ledge of the berg, stretching up to check for food. Glaucous Gulls and Thayer’s Gulls waited nearby for something to happen. We cruised again in the afternoon to enjoy close safe views of at least 20 Polar Bears for the day.
We wondered why so many skeletons of Belugas were on shore. Coningham Bay is very shallow and this attracts Belugas to rub on the gravel bottom and slough old skin, creating an opportunity for Polar Bears. Possibly the whales become trapped at low tide and fall prey to Polar Bears, which haul them onto the shore. Bears, gulls and other wildlife scavenge on the dead whales.

After we returned to the ship, conversations buzzed over what each person witnessed on this fine day in the Canadian High Arctic. We were all so happy to share this memorable wildlife experience, and anticipated with enthusiasm the next day’s wildlife viewing.
Webinar Library