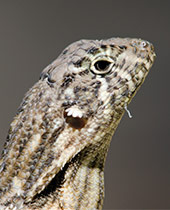 Note: All photos on this blog were taken by Josh Vandermeulen!

What comes to mind when you think of Cuba? For many, Cuba is an attractive destination during the dead of winter, a respite from frigid temperatures of more northern latitudes. Cuba’s fascinating history is a curiosity for many visitors, as the country represents one of the few extant Marxist-Leninist socialist states. For those of us drawn to nature, Cuba is particularly popular for its diverse and colourful bird life. Resident species like the Cuban Tody, Bee Hummingbird and Cuban Trogon are complemented each winter by the arrival of millions of migrant warblers, tanagers and grosbeaks, while the shorelines are dotted by sandpipers and plovers.

Cuban Grassquit, Bee Hummingbird, Cuban Tody
But for nature lovers, there's more to Cuba than its bird life. The island of Cuba is also home to an astounding variety of reptiles. More than 150 species inhabit Cuba, including over 100 lizards, 38 snakes, and several turtles and crocodilians. Many of these are endemic to Cuba – meaning they live in Cuba and nowhere else – and some are highly specialized, being limited to a particular habitat within Cuba. It is precisely the fact that Cuba is an island that has facilitated the proliferation of reptile species – in fact, the formation of new species, a process scientists call speciation.
How does speciation take place? Essentially, speciation occurs when two populations of an organism are separated by a barrier of some kind. Migration between the populations no longers occurs and once gene flow ceases, the forces of natural selection act on each population, causing them to differentiate and become genetically distinct over time. Islands are prime laboratories for speciation to occur because the inhospitable seas that surround them prevent gene flow between closely related populations on neighbouring islands, and causing the newly formed species to be restricted in range to their island – becoming endemic species to their respective island. 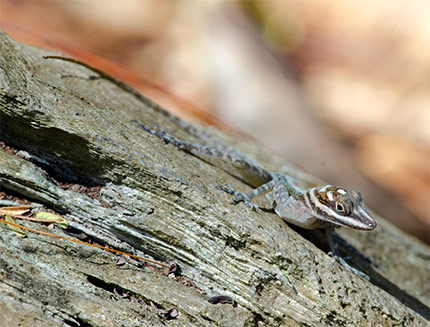 One of the many different anoles in Cuba
Some of the most frequently encountered endemic reptiles in Cuba are the anoles. These lizards are known for their colourful dewlaps (throat fans) which can be flared out, usually during a territorial dispute between males. Anoles are widespread in the American tropics but it is in the Caribbean where they represent one of the best-studied examples of speciation occurring in island environments. Over 400 species of anoles inhabit the Americas but nearly 150 of these are endemic to the Caribbean islands; a very high proportion given the Caribbean’s small total land mass. The evidence suggests that these 150 or so anole species originated from as few as two colonizing species from the mainland! The original colonizers eventually spread through the region, likely through a combination of “island-hopping” as well as by traversing land-bridges during periods of low water levels. The lizards filled niches and became specialized, while also becoming isolated from other anoles as sea levels rose and separated populations through the establishment of islands.

Interestingly, reptiles aren’t the only group of Cuban animals demonstrating a high level of endemism. Between 15-40% of Cuba’s beetles, land snails, ferns, and many other life forms are endemic to the archipelago. This is typical not just of Cuba, but of many islands around the world - both islands in the traditional sense, and other “island” habitats such as an isolated mountain range. While many of us visit Cuba for the alluring bird life, the diversity of reptilian life may add an unexpected dimension to a trip. You may be pleasantly surprised to discover how fascinating Cuba’s reptiles can be! 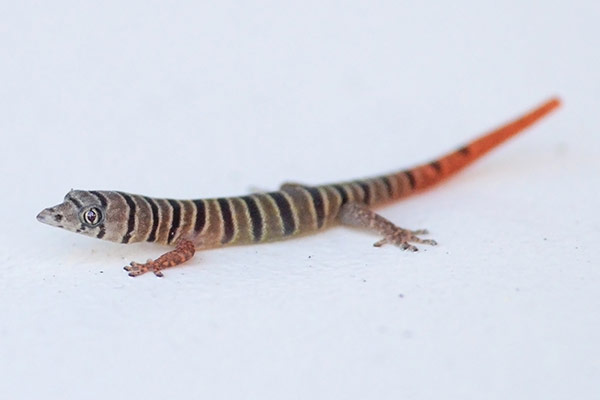 Ashy Gecko (Sphaerodactylus elegans)
The Ashy Gecko is a widespread species in Cuba and Hispaniola. The brightly coloured, banded juveniles (such as this one) look completely different than the drab, brownish adults. 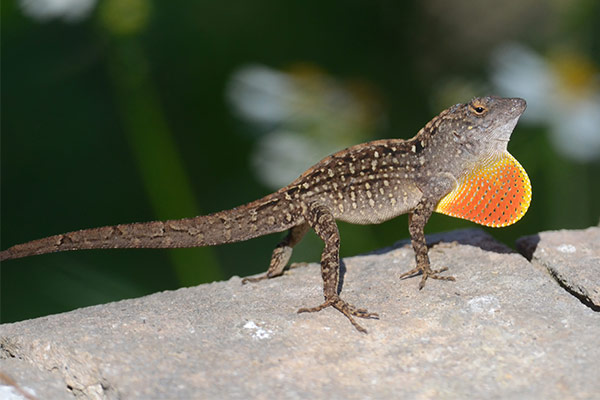 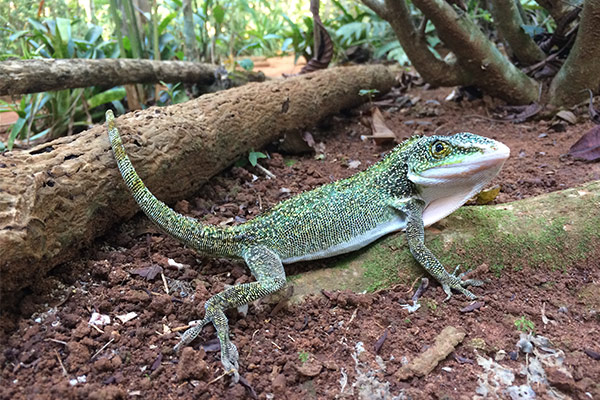 Western Giant Anole (Anolis luteogularis)
This species of anole is limited to western Cuba and is more specialized in its habits.
It is relatively large and is mostly arboreal species. 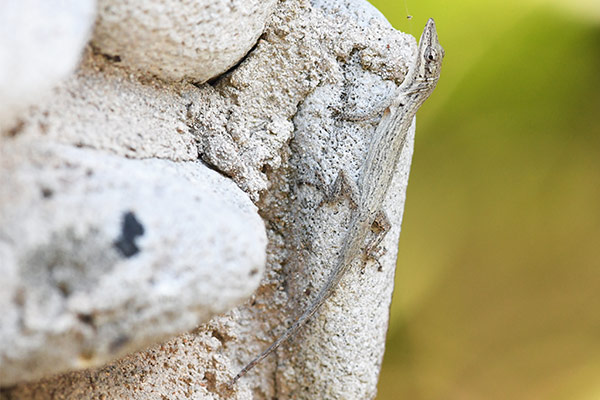 Cuban Twig Anole (Anolis angusticeps)
The patterning on this anole allows it to camouflage perfectly in its namesake habitats – twigs and branches in the lower levels of trees and bushes. 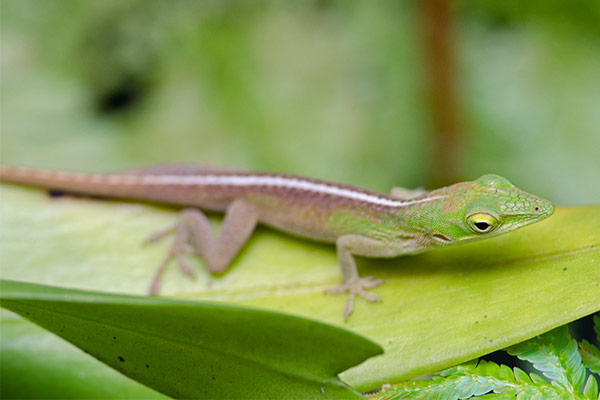 Cuban Green Anole (Anolis porcatus)
An anole’s colouration may provide a good clue as to its habitat preferences. This species is arboreal and its variable green and brown colouration blending in with a leafy environment. 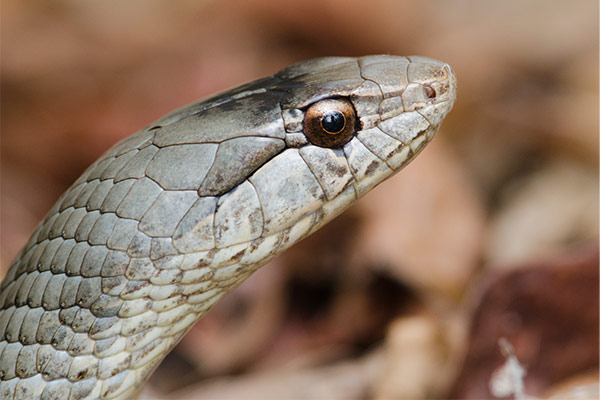 Cuban Racer (Cubophis cantherigerus)
The Cuban Racer is closely related to five other species in its genus, spread throughout the Greater Antilles, that all likely originated from a single colonizing ancestor. 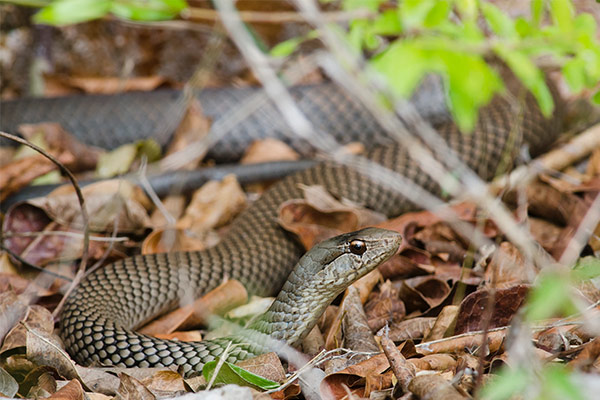 A Cuban Racer in its habitat 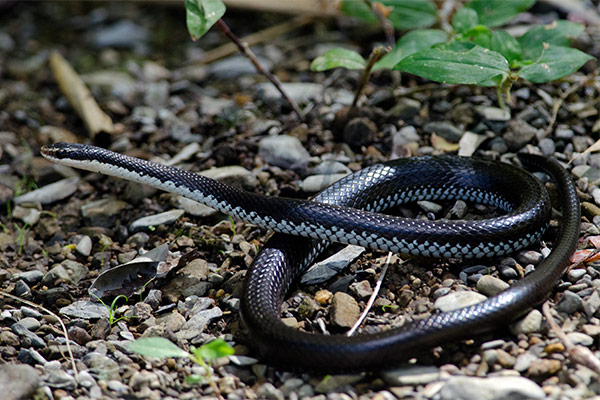 Cuban Lesser Racer (Caraiba andreae)
The Cuban Lesser Racer is an attractive and common species found throughout the Cuban archipelago, but nowhere else in the world. It dines primarily on small vertebrates including frogs and anoles. 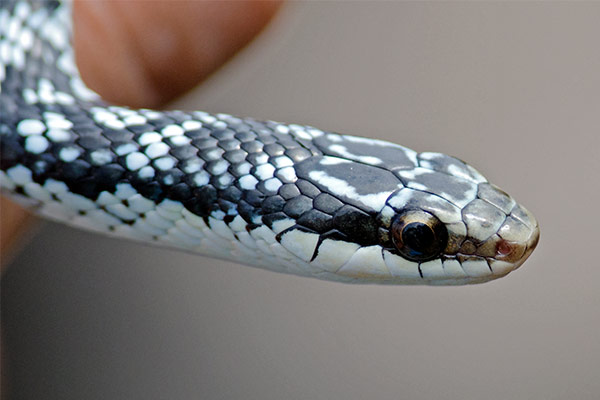 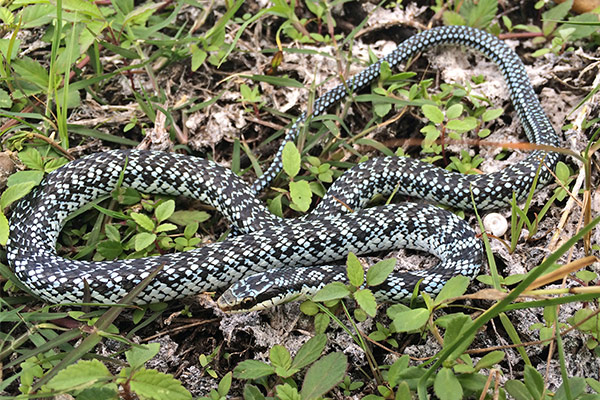 Another Cuban Lesser Racer with a different pattern of scales 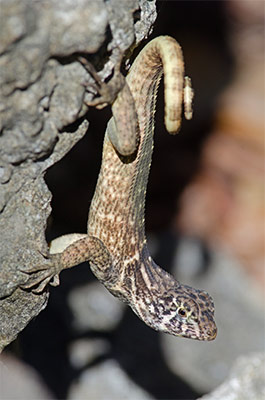 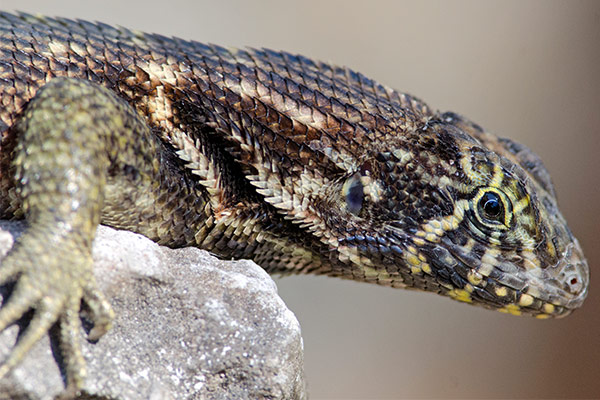 Close-up of a Northern Curly-tailed Lizard
We’ll be watching for reptiles among so much else on our essential Best of Cuba tour in February 2022. Please consider joining us!