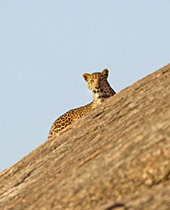 It seemed questionable to me. Although I knew there were big cats in the hills that I was visiting on this clear and crisp morning, what was the chance of actually seeing one? This sort of nervous anticipation is surely not foreign to anyone questing for an elusive quarry; after all, spontaneity and some healthy dose of unpredictability governs any exploration in the outdoors. The Leopard was the main quarry of this part of our 2018 Quest trip to India. Leopards enjoy a wide range through most of India and are not considered altogether rare. In fact, they can be found in surprisingly close quarters to human habitation. However, pressures on their habitats and their apprehensions about people mean they practice the art of skillful avoidance. The Aravalli Hill range in which we found ourselves provide good conditions for Leopards. This range of ancient and eroded mountains and their outcrops running in a northeast-southwest axis have many nooks where Leopards can retire while allowing fair access to food sources. 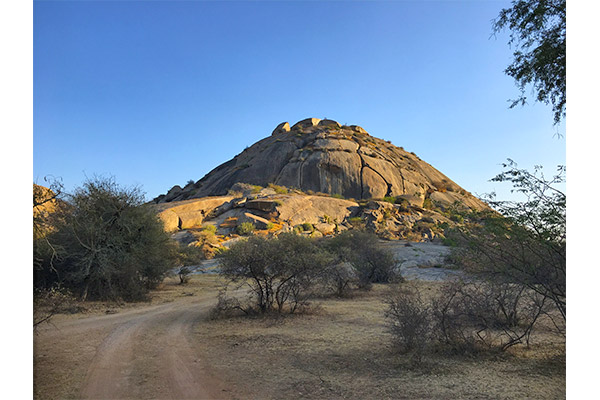 An outcrop of the ancient Aravalli Range has cavernous recesses were Leopards den.
It would take a good deal of patience. Our group positioned ourselves in our open safari vehicles at various points along the east side of this particular outcrop and paused. Leopards are known to sun themselves in the morning, and perhaps we could see one. We waited and watched from various vantage points for the slightest movement. In the meantime, the exotic chorus of local birds provided ambience (make sure you turn on your sound for fuller effect). 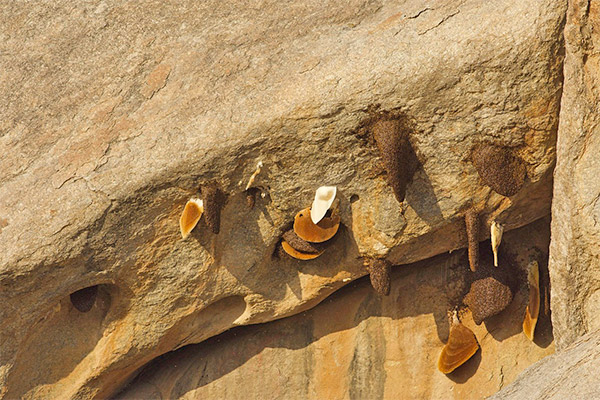 These large open-air honeycombs of the Indian Rock Bee (Apis dorsata)
are placed in rocky overhangs. The dark hives are covered with bees.
Our vigil continued for some minutes and suddenly there it was. Peering at us over a rock were sharp eyes of a Leopard, watching us with circumspection. After inspecting us for a moment, it disappeared from sight. 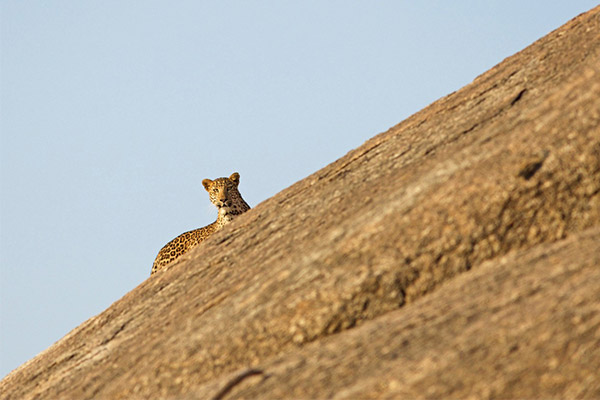 A first glance from a Leopard… 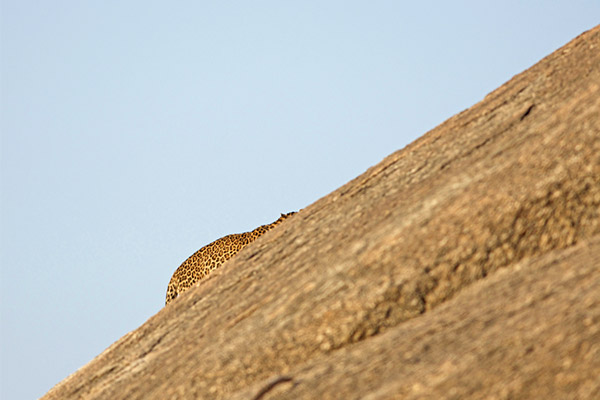 Slinking away from sight…
After a couple more stops, we discovered where it was going. 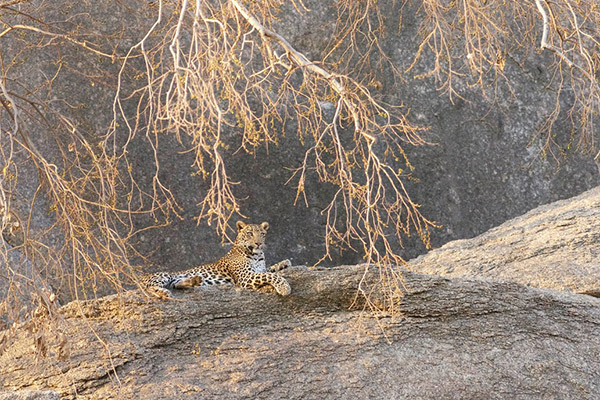 It looked at us one last time before disappearing.
We figured it was a large male cub, judging by the fact that it joined another similarly-size Leopard, whom we figured was its mother. She was in a crevice to the left of where we re-sighted him. She was consuming something. I won’t show you exactly what we saw…but she was chewing on the skull from a bovine that I assumed might be a cow. 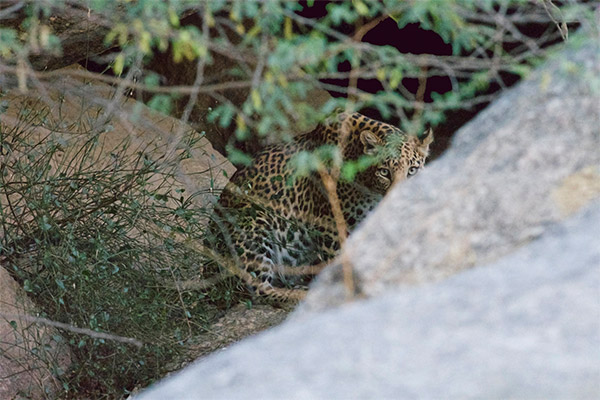 The mother Leopard was aware of us but intent on her meal.
Was it a wayward cow that had wandered just nearby, or did the mother (and her son?) capture it at distance? Either way, the thought that they might haul a cow into a crevice it could not possibly reach on its own spoke to the strength of these cats! We watched for some time as she consumed whatever it was. After some time feeding and then a pause, mother Leopard nonchalantly departed the cavernous recesses of her lair and began walking across the surface of the outcrop. 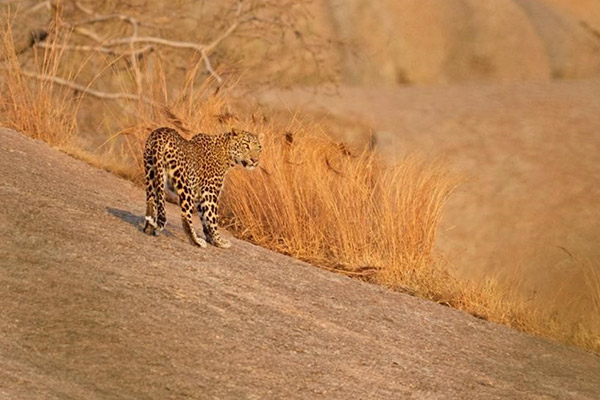 The Leopards remain wary but seem to display a confidence in these chosen haunts.
Eventually she disappeared from view. On our return drive we caught sight of her continuing to creep nimbly along the ledges to what seemed a favoured spot. And then, she simply lay down in the warm sun below overarching tree limbs, surveying her realm. 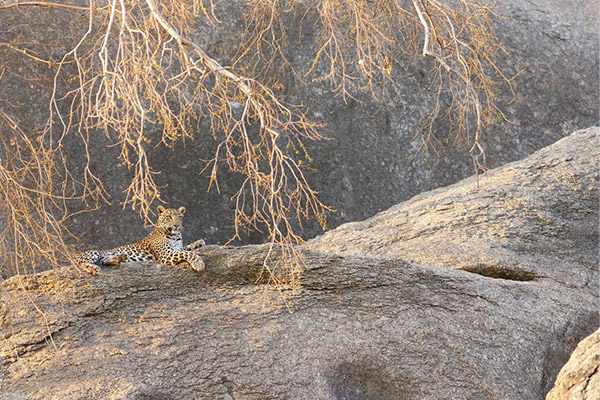 Just as a domestic cat likes to sunbathe on a windowsill,
Leopards enjoy basking in the warm morning sun after a cool night.
This would not be our only sighting of Leopards on this day. In the evening at another hill site, we would see a much younger Leopard cub watching its mom head out on the hunt and cause considerable alarm among a large group of Grey Langurs, the resident monkeys! It was an enlightening day, letting us not only see Leopards but also appreciate the importance of these wonderful hills for them and other wildlife, and their part in the greater story of India’s amazing landscapes.

Please be in touch with us if you’d like to include a Leopard safari experience in the Aravalli hills in your next visit to India.

Set date departures that include this experience:

Bespoke itineraries that can be tailored to include this: