Oilbirds: Birds that Plant Trees in the Dark 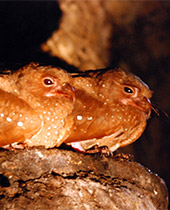 Oilbirds are the only nocturnal fruit-eating bird and one of the most – if not the most – extraordinary and bizarre birds on the planet. They nest in colonies in caves like a bat, navigate with sonar like a dolphin, have vision like a deep-sea fish, use whiskers like a mouse, hover like a kingfisher, smell fruit like a primate, and scream like a demon. Rumour has it that these birds never see the light of day, bringing fruit back to the cave at night, where the indigestible fruit seeds that they regurgitate whole will germinate, but die in the darkness. However, new research shows that not only are they the most evolutionarily distinct bird alive today, but they are also one of the most important for Neotropical forest regeneration. 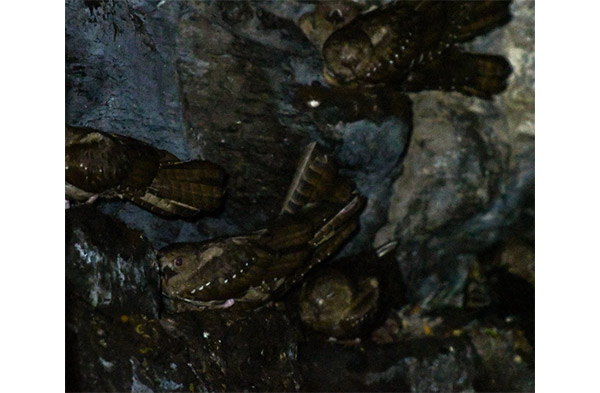 The oddball Oilbird is the sole member of the family Steatornithidae, and according to modern computer modelling techniques that merges genetic data, the fossil record and previously proposed evolutionary relationships into a new evolutionary tree for birds, the Oilbird has been on its own evolutionary branch for 90 million years, making it one of – if not the most – distinctive bird on the planet. Its closest relatives are those from the order Caprimulgiformes which include nightjars, swifts, and hummingbirds.
Whales of the Air
Typically, birds and oil don’t mix, unless we are talking about the uropygial gland, the oil gland that many birds use while they preen. Some use it for waterproofing, others as a sort of make-up product, or as an anti-microbial body lotion, while some lack one completely. While Oilbirds have one of the most well-developed uropygial glands, this is not the reason for their name. Rather, the name Oilbird comes from the plump chicks that can be 50% heavier than their parents. You have heard of chicken of the sea, but what about whales of the air? These jelly babies were collected and rendered down for their fat by indigenous people and early European settlers, much like whalers sought and rendered whales. In a strange twist, the oil from these highly specialized nocturnal bird chicks were used for everything from flavouring food to fueling the very torches that helped illuminate Oilbirds to Alexander von Humboldt, the first to describe the species for the European scientific world. 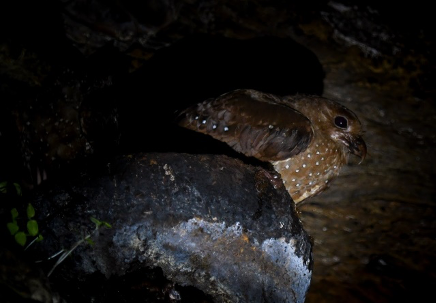 A juvenile Oilbird is of comparable outer appearance to adults, but with darker brown wings.
Denizen of the Dark
Oilbirds roost communally during the day, deep inside pitch-black caves of montane forests in the New World Tropics from the Caribbean's southernmost island, Trinidad, to most parts of northern South America, and further south from Peru to Bolivia. Their Spanish name, guácharo, translates to ‘one who cries/laments’. However, that really doesn’t quite prepare one for the sounds they emit. The best way to describe it is a cross between a horde of cave banshees and a pack of dinosaurs, or some sort of collective exorcism. Some caves contain up to 18,000 guácharos! 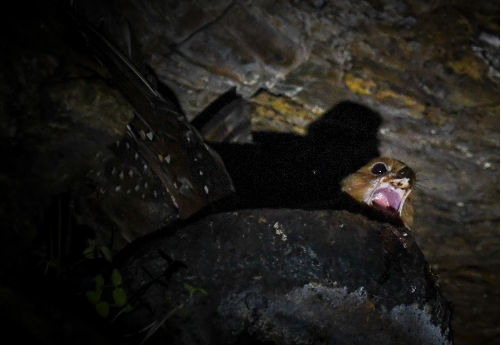 Oilbirds live up to their Spanish name, guácharo.
Arsenal of Senses
When night falls, Oilbirds emerge from their caves to feed on fruit. To navigate in the dark, they utilize an extraordinary arsenal of senses unlike any other bird. First, Oilbirds can map out the terrain with the help of echolocation using loud, audible clicks to sense the walls of their caves, other birds, and trees. There are less than 20 bird species in the world that echolocate, the Oilbird being the only one that is a fruit-eater. To home in on their choice fruits, often in treetops, they use their keen sense of smell! Their vision is unparalleled amongst vertebrates. Oilbirds have eyes with three-tiered layers of rod cells; this effectively packs in one million rods per millimeter, giving Oilbirds the highest rod density recorded in any vertebrate and pushing the limits of sensitivity. Other animals with a similar eye structure include deep sea fishes. Last, Oilbirds even have tactile whiskers, perhaps used to help adults locate their eggs or chicks in the nest. 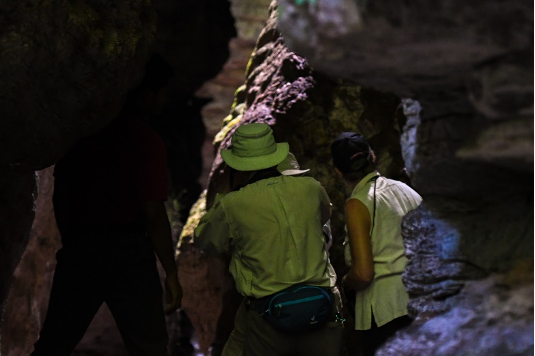 On our Trinidad & Tobago: A Tropical Birding Hotspot tour you will get to experience hiking to Dunston Cave to view a breeding colony of the nocturnal Oilbird.
Planting Trees in the Dark
Aside from being astonishingly adapted for life in the dark, Oilbirds are being increasingly recognized for their ecological importance as crucial seed dispersers in forest ecosystems. Their diet consists of fatty fruits from over 50 different tree species including various palms and avocados, which rank among the fattiest of bird foods. Using their intimidating-looking hooked bills, they hover over the fruit, plucking and swallowing them whole. Their choice fatty fruits are important for maintaining body heat under the cool cave and montane forest conditions. Regurgitated fruits are an especially important food source for nestlings as well as for nest building material. During the nesting season, a stunted forest of seedlings grows on the floors of Oilbird caves because adults must return each night to feed their chicks, resulting in a shower of seeds being gradually deposited on the cave floor. However, nesting season does not last all year and not all birds in the colony nest each year. During the non-breeding season, the birds are absolved of flying back to their caves each night, allowing them to roost in trees during the day and to fly considerably longer distances during the night in search of fruiting trees. Unconstrained from parental duties, their efficacy in dispersing seeds increases as their range can extend hundreds of kilometres beyond their nesting caves and into neighbouring regions. In contrast, monkeys disperse the seeds of small fruits over only much shorter distances. Oilbirds are especially important because seed dispersal is one of the most important processes in any ecosystem, and many seed dispersers are in decline as the bushmeat hunt persists and human-influenced habitat fragmentation continues to rise. 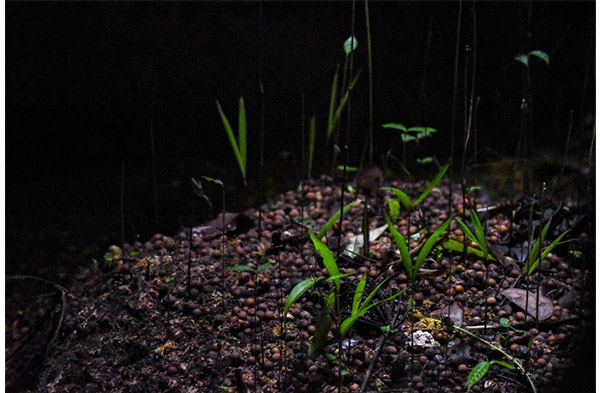 After swallowing palm fruits whole, the large seeds are regurgitated, and sprout as seedlings from the bottom of their caves, giving hints at the Oilbird's tremendous seed dispersing capabilities.

Experience a colony with hundreds of Oilbirds in Dunston Cave
at the Asa Wright Nature Centre in Trinidad
When you choose to discover our natural word with Quest Nature Tours, you not only get to experience enriching journeys in extraordinary places, but you can also pack a peace of mind knowing that you are supporting wildlife and protected areas, assisting in diversifying the livelihoods of people who live in and near these areas, increasing your own environmental ethic, and raising awareness and public support for conservation that extends beyond the communities and regions we visit.
Webinar Library