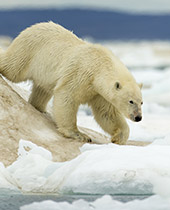 I’ve been fortunate to see Polar Bears on various occasions, and they are always impressive whether observed at close range or at a distance. The simple notion that an estimated 22,000 – 31,000 of them survive in an extremely challenging (and a changing) environment, distributed as they are across the vast arctic and subarctic regions of 5 countries, makes them worthy of no small respect.
Over the course of a year, a Polar Bear could wander for months at a time over many thousands of square kilometres of sea ice as it hunts for seals, and later it might spend several months wandering on land after seasonal sea ice has melted away and while it waits for sea ice to form again. Because Polar Bears range over large distances, seeing one could be an infrequent event were we to be plunked down randomly somewhere within the species’ range – seeing a bear is certainly not an experience to be taken for granted! There are nonetheless some particularly good places to go where a combination of conditions can make for great bear-viewing opportunities and offer special insights into their enigmatic lives.
The question I might ask you is:
Would you like to see a Polar Bear on land? Or on ice?
First, on land…

If you’ve ever wished to see wild Polar Bears up close and see a good number of them, the experience on land at Churchill, Manitoba is probably your best bet. Rightfully dubbed the “Polar Bear Capital of the World”, Churchill is situated on the southwest shore of Hudson Bay near the epicentre of the western Hudson Bay sub-population of Polar Bears. The epicentre is Cape Churchill just to the east, where a reliable sea ice platform forms first in November and bears can get onto the bay soonest. Cape Churchill is also just above Wapusk National Park, the place where most Polar Bears in the western Hudson Bay sub-population were born (the name derives from Wâpâsk, the name for Polar Bear in the Cree language). 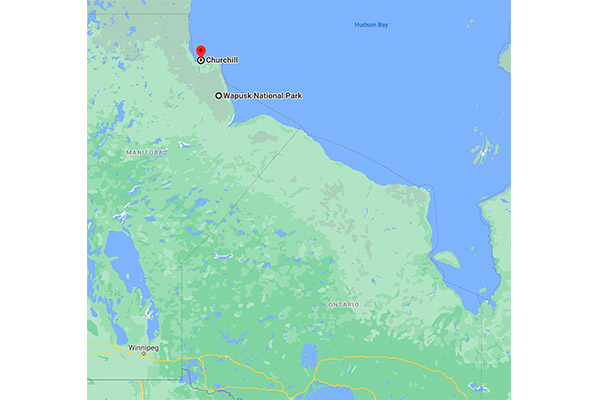 After the sea ice in Hudson Bay melts in summer and the bears, which were roaming widely across Hudson Bay for months, are forced to come ashore, they naturally home back in on the region. Their numbers build gradually over the summer and into the fall as more and more bears return, and by the freeze-up of Hudson Bay in November, they are inching in all along the coast. 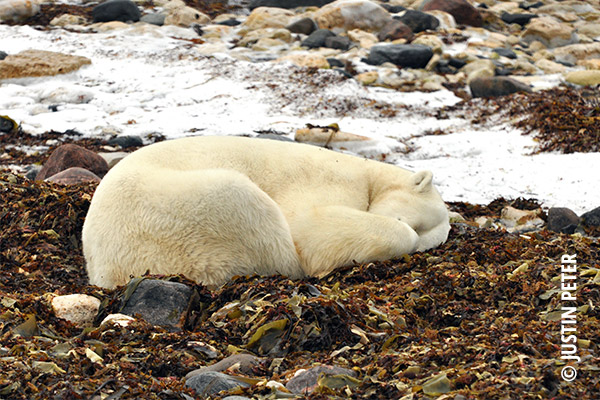 With little high-quality food to eat on land, bears may spend plenty
of time resting as this self-assured large male is doing
The higher concentration of bears means that these mainly solitary animals must tolerate each other, uneasily at times. Males may occasionally play-spar with each other, and mothers with cubs cautiously avoid males. By using specially designed vehicles that follow established routes, we can see view Polar Bears of different ages, temperament, and status. 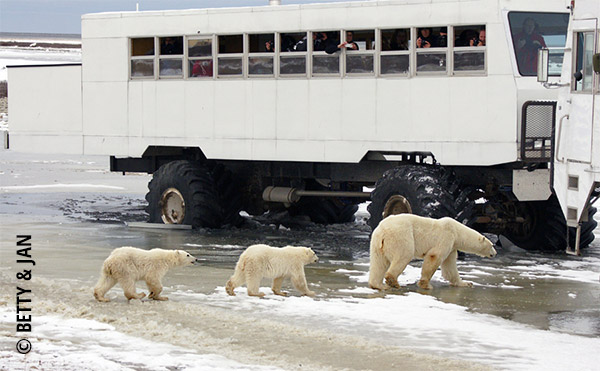 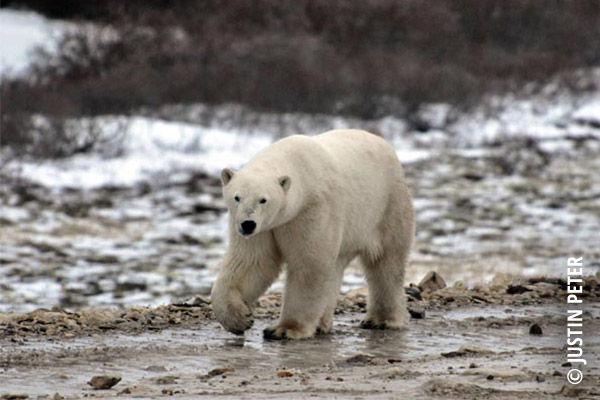 A large male is curious and approaches our vehicle, his snout twisting towards us.
The sense of smell is vital to bears 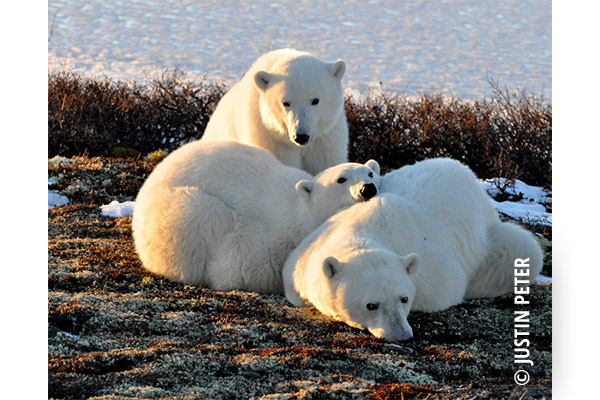 A female Polar Bear (at fore) watches carefully with her two large youngsters – born the year prior – nestled behind her. She will be keen to avoid any meetings with the larger and stronger male bears 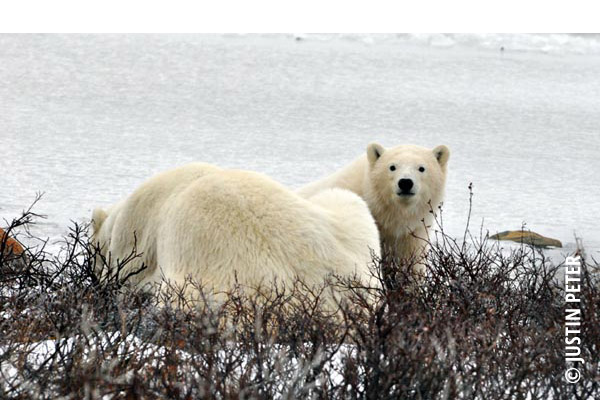 A sleeping mother with a youngster born in the current year 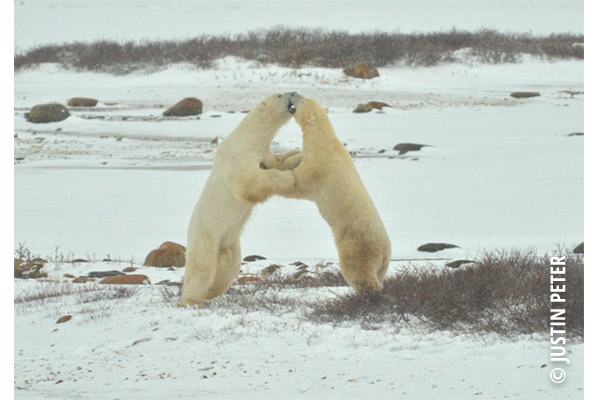 If they meet, younger, independent males may engage in play sparring,
practice for when dominance will confer breeding access to females
The experience at Churchill cannot be underestimated. The sheer number and density of Polar Bears makes such that the likelihood of encountering many along our routes is very high. What’s more, the fact that the bears are mainly lounging about and not particularly active means that we can get prolonged views of them. 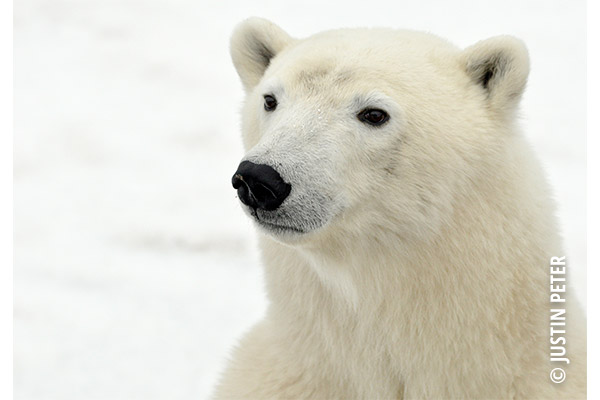 You will never be closer to a Polar Bear than at Churchill
There are other ways to see Polar Bears, however…

Home to another Polar Bear sub-population, Norway’s High Arctic Archipelago of Svalbard offers a fascinating, alternate experience to Churchill. Lying on the southern edge of the ice-laden Arctic Ocean, the archipelago’s shorelines become encrusted in ice once winter sets in and this ice naturally forms a great resting platform for seals, and hence a feeding platform for the resident bears. 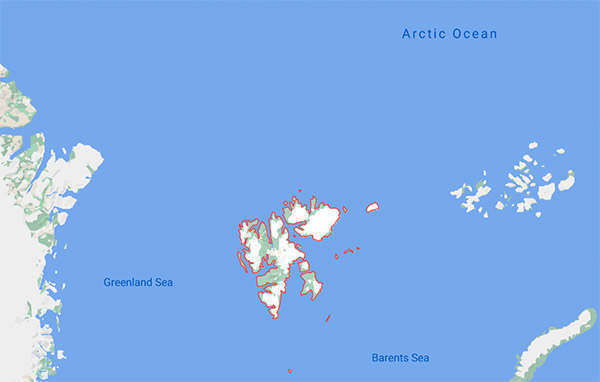 Come warmer weather and gradual ice break up, the bears must eventually return to land as they do at Churchill, but there is a window of time when it’s possible for us to circumnavigate the remaining sea ice by small ship. The vessel itself becomes a viewing platform from which we can spot and watch bears, and we can take Zodiac rides for closer views while keeping a respectful distance. 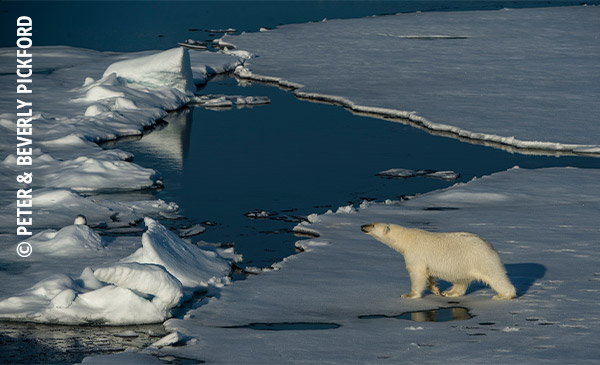 While the density of bears is not what it is in Churchill, Svalbard offers the opportunity to see bears actively coursing along atop the ice where they are so much at home and seem the most alive, searching for their next prey, or perhaps even feeding upon a fresh kill. 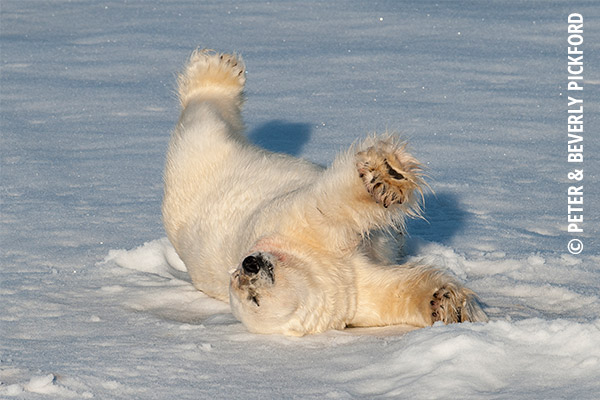 A bear rolling in the snow to keep itself clean. Note the pinkish staining on
the bottom jaw and throat indicates it has been feeding recently
Kill sites will be visited by other wildlife that depends on the Polar Bear, such as the beautiful Ivory Gull. 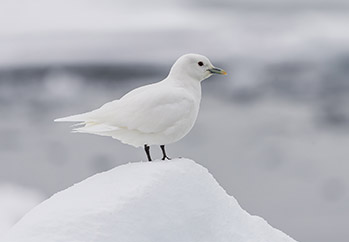 In addition, Svalbard provides a backdrop of glaciers and snow-dusted mountains - incomparable! 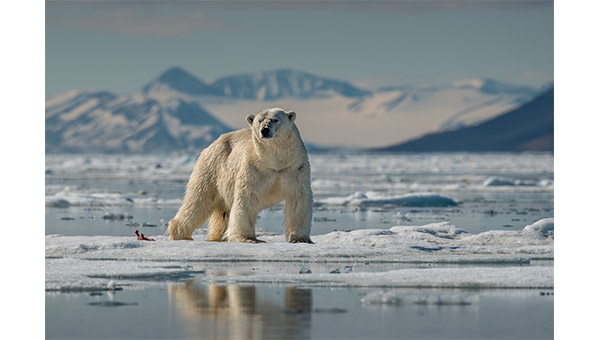 On ice, with a twist…

The floe edge in Arctic Canada offers a third way to see Polar Bears. The floe edge is where open sea water meets sea ice as the ice begins to break up in spring. As channels form far into the ice, among ice floes, aquatic wildlife highways are created, attracting whales (such as Beluga and Narwhal) and seals, which can now easily enter locations otherwise inaccessible to them. Polar Bears will wander these edges as they search for seals. With our expert Inuit guides, we set up camp along the floe edge and watch for bears that may wander by! Alternately, we may encounter a bear as we explore the nearby channels by motorboat. 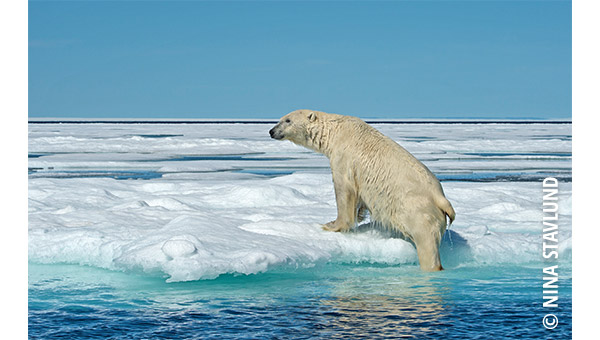 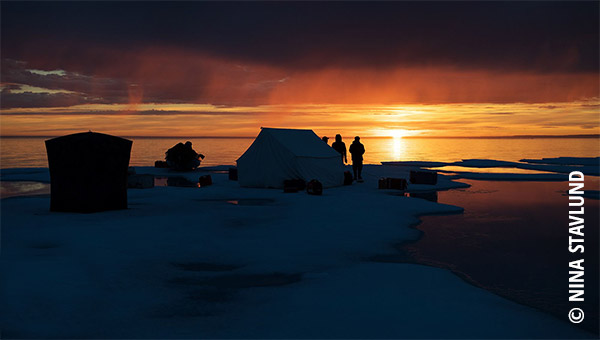 The floe edge is an amazing wilderness experience 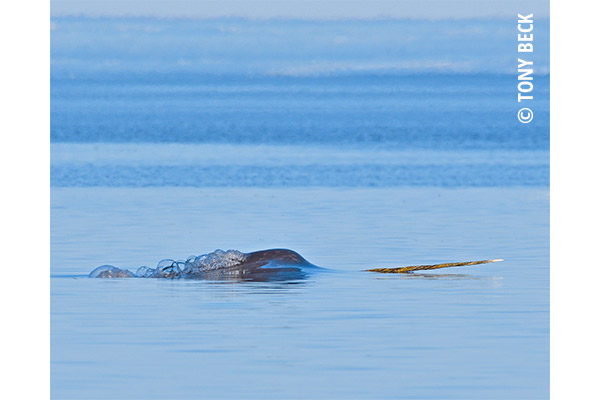 Other spontaneous sightings may include Narwhal!
Do you have a preferred way to see Polar Bears? You can read more about our 2021 land tour at Churchill here, view our Svalbard expedition cruise in June 2022 here, or consider the wonderful floe edge wilderness experience in Nunavut here.
Webinar Library