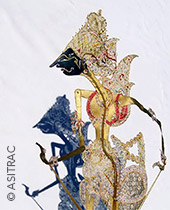 When thinking of Indonesia, the first things that comes to my mind is the gamelan music and the shadow puppet theatre, an ancient form of storytelling. So it was with great anticipation that last year I visited the exhibit Shadows, Strings and Other Things: The Enchanting Theatre of Puppets organized by the University of British Columbia’s Museum of Anthropology in Vancouver based on their international collection of puppets. The Asian theatre section included an elaborate display of puppets from Indonesia, the three-dimensional wooden puppet (wayang klitik or golèk) and the flat leather shadow puppet (wayang kulit). 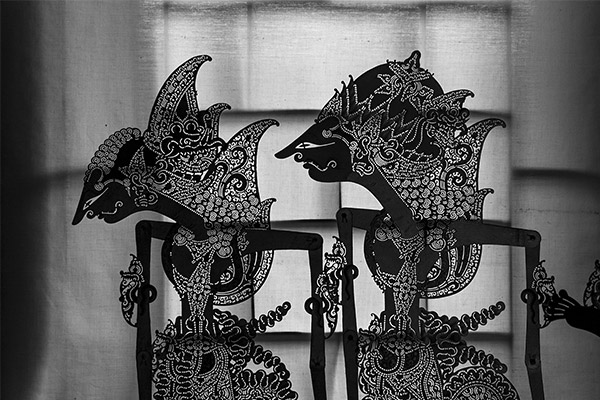 Wayang kulit
Wayang kulit is one of the most popular forms of puppetry in Indonesia, which flourished at the royal courts of Java and Bali as well as in rural areas. It is thought to be derived from the leather shadow puppetry of southern India, which came to Java with the spread of the Hindu and Buddhist religions in the first millennium of the common era, along with writing and wet rice farming. Wayang kulit came to Bali, when the Majapahit Court moved there in the 16th century from neighbouring Java, after the first Islamic sultanate had been established. 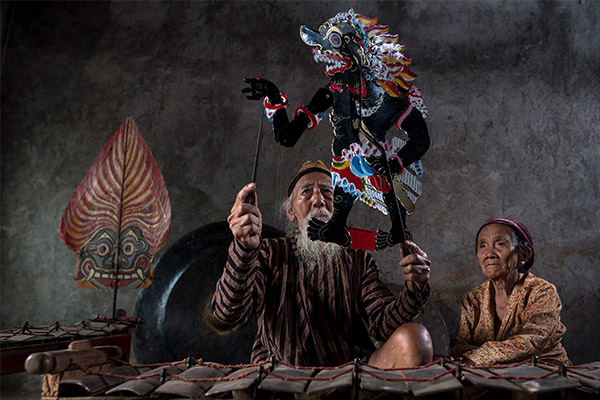 Wayang kulit © Candra Firmansyah
The stories are inspired by Indian epics such as Mahabharata and Ramayana, but were adapted to local cultures and traditions. They usually have an extensive cast of gods, heroes, villains, ogres, and demons and involve moral and ethical dilemmas faced by the main characters, following their journeys through life, love, and war. At the royal court of Yogyakarta, the plays are performed to mark special occasions, such as birthdays, marriages, and religious events. 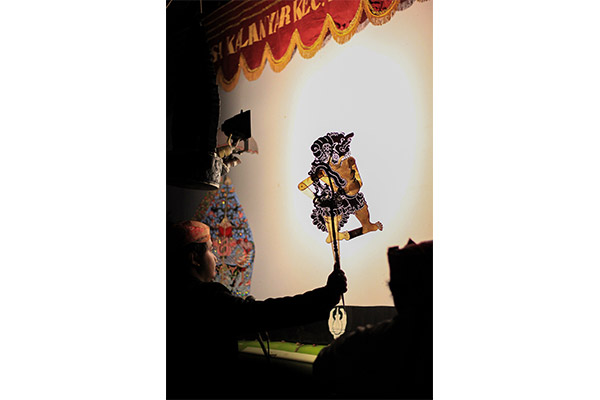 Puppeteer © Mochardian
The shadow plays are performed by one sole master puppeteer called dalang, who relates the story, does the voice for all characters, both male and female, while manipulating the swivelling arms by means of slender sticks attached to the puppets. The repertory and performance techniques were transmitted orally within the families of puppeteers, musicians and puppet-makers. Master puppeteers are expected to memorize a vast repertory of stories and to recite ancient narrative passages and poetic songs in a witty and creative manner.

The carefully handcrafted puppets vary in size, shape and style, and are projected in front of a screen lit from behind, creating magical shadows of moving images for the audience. The performance is accompanied by singing and a live traditional gamelan orchestra. 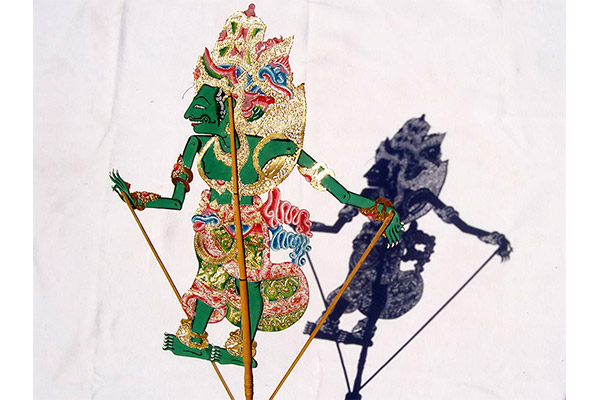 Wayang kulit © ASITRAC
When the play is about to begin, the dalang places one of his gunungan or kayon – a large leaf-shaped shadow puppet-form representing a tree of life or sacred mountain – in the centre of the screen to separate the opposing groups of puppets and to announce that the cosmic order is in balance.

Traditionally, wayang kulit performances drew large audiences from all neighboring village and typically lasts for seven hours, going from midnight until dawn. The audience is familiar with the story and is keen for the “intermission” of the clown characters. The words and actions of these comic characters representing the “ordinary person” have provided a vehicle for criticizing sensitive social and political issues. Perhaps this special role may have contributed to wayang’s survival over the centuries. 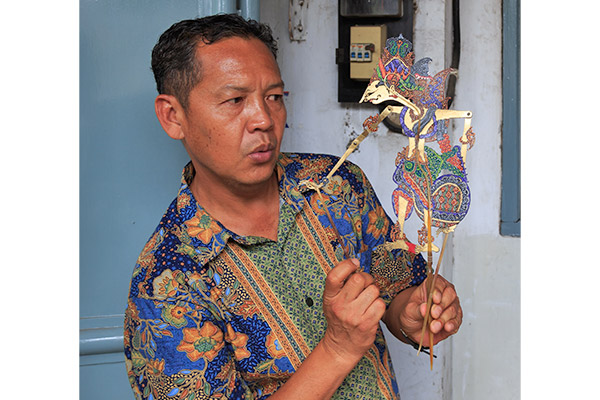 Wayang kulit artist in Jakarta © CEphoto, Uwe Aranas
The art of Wayang has been inscribed by UNESCO in 2008 as a “Masterpiece of Oral and Intangible Heritage of Humanity”. Today wayang kulit performances are still regularly held at the Sultan's Palace of Yogyakarta and Solo.

Travel to Indonesia with Paula Swart in October, 2021.
Webinar Library