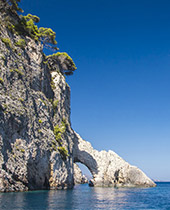 The fabulous island of Crete (“Kriti”) has played an outsized role in history. The story begins with the discovery of human-like footprints, approximately 5.7 million years old, from Trachilos in western Crete. These prints belonged to primates that walked on two feet, like humans and unlike chimpanzees. And there are no knuckle prints.
The Mediterranean Sea was dry then, and savannah-like environments extended from North Africa up through the eastern Mediterranean. The savannahs of southern Europe may have played a role in the splitting of human and chimpanzee lineages by allowing an increase in migration and the development of separate evolutionary paths. 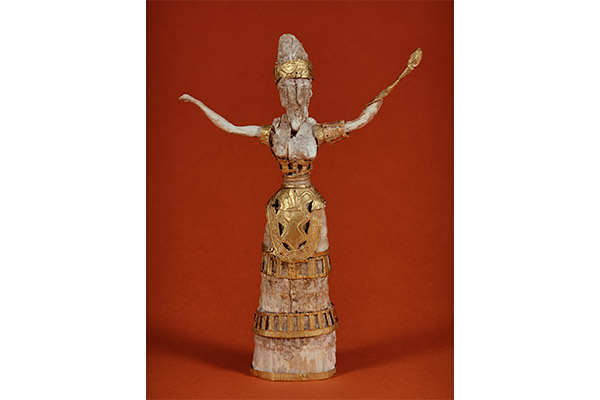 Minoan Snake Goddess, symbolic of fertility and regenerative powers
Ivory and gold, 21.5 cm (8.4 in), 16th century BC
Immigrants first arrived on Crete 9,000 years ago. Perhaps the most intriguing period of Cretan history was the Minoan era, from roughly 3000 BCE to about 1100 BCE. This Bronze Age civilization derives it name from Minos, which was either a dynastic title (like “king”) or the name of a particular ruler of Crete.
Minoans were the first Europeans to develop an alphabet (“Linear A”), but their writing can’t be translated since their language is unknown. 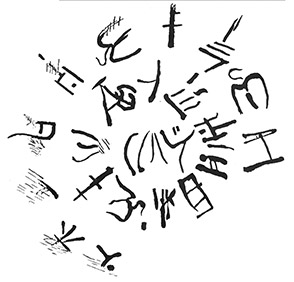 Ink-witten inscriptions in Linear A
Crete claims to be the birthplace of Zeus, king of the Gods, but that is wishful thinking. Zeus was born on Mt. Lykaion in the Peloponnese (southern Greece) and his altar there dates back 5,000 years.
However, Minoans worshipped Mother Earth above all, and she is depicted on many of their statues and paintings. Remarkably, Minoans were the only high civilization of that time which was not patriarchal.
“In Crete, for the last time in recorded history, a spirit
of harmony between men and women as joyful and equal
participants in life appears to pervade.”

The Chalice and the Blade. Riane Eisler

The Palace of Minos, with its naturalistic frescoes and stunning architecture, is a delight to explore. While the half-man, half bull, minotaur was mythic, the Minoans practiced incredible acrobatic feats with bulls in the central courtyard of the Palace. 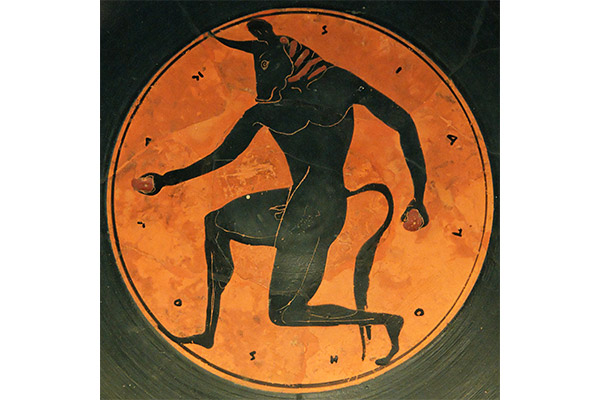 Minotaur circa 515 BC at National Archaeological Museum
© Marie-Lan Nguyen
The Minoans derived much of their wealth from trade with Egypt and the near east, and for a while dominated Athens and the Peloponnese, as shown in the story of Theseus and the Minotaur.

The main source of water at Knossos initially was a spring about 10 kilometers away, conveyed by way of a system of terracotta pipes. A sewer system connected to bathtubs and toilets flushed with rainwater. 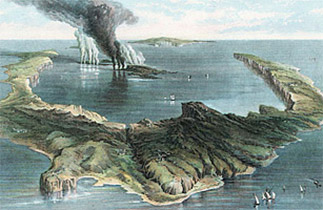 Eruption of Thera
© World History Archive
The main cause of their downfall was probably the devastating volcanic eruption of Thera (Santorini) – whose tsunamis destroyed their fleets and whose dust disrupted agriculture.
This catastrophe probably gave rise to the story of Atlantis.
Over the next few centuries, many Greeks, primarily Mycenaeans, arrived and ruled for several centuries. Following the “Golden Age” and the empire of Alexander, Crete suffered occupation by Romans, Crusaders, Venetians, Ottomans, and most recently, Nazis.

Map of Crete by Abraham Ortelius, 1598
Cretan resistance to invaders is legendary.
Crete was reunited with Greece in 1913, and contributed one of its most important leaders, Eleuthérios Venizélos, who became Prime Minister. 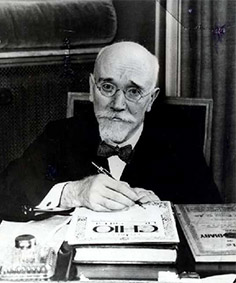 Eleuthérios Venizélos (1864 - 1936)
In the arts, printer El Greco and writer Niko Kazantzakis are probably the most renowned Cretans. 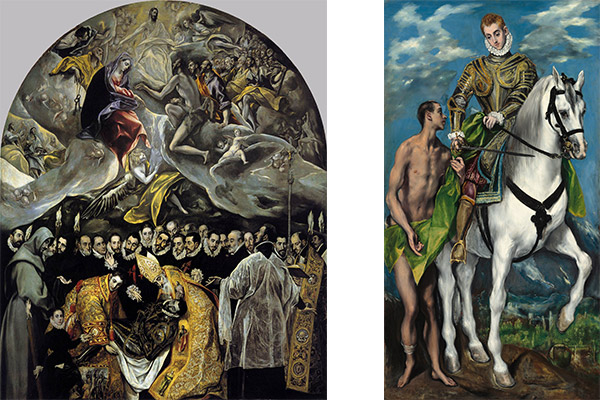 The Burial of the Count of Orgaz and Saint Martin and the Beggar by El Greco
Dig deeper into this island's history, as well as main land highlights, with alumni UBC Study Leader Peter Prontzos.