Coastguards on the lookout for smugglers created the South West Coast Path, used for centuries by fishermen spotting fish shoals. Running along the coasts of Devon and Cornwall, the Path is chockfull of gorgeous seaside views with towering cliffs and hidden coves. There are magical legends associated with many spots along the walk and we’ve plucked our favourites here.

These are the magical legends of the Southwest Coast Path... 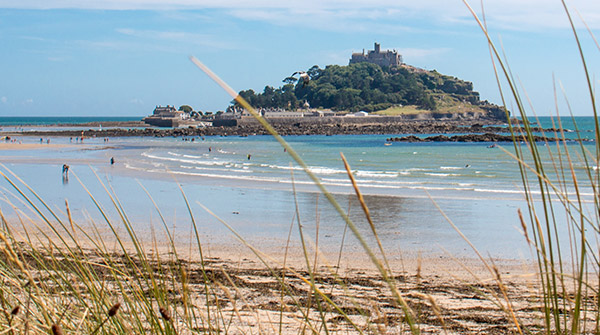 St. Michael’s Mount
The other one... For those of us more familiar with the French Mont St-Michel, it’s a bit of surprise to find another one in Cornwall. This magical place is a tidal island accessed on foot only at low tide when the sea recedes to reveal the granite pavestone pathway linking it to the mainland.

Phoenician ships may have sailed here 2000 years ago to trade for Cornish tin. The area has been a sacred site since the 5thC when it is said that St. Michael appeared walking high up on the rocky ledge. The structure on the mount was first a church, then a priory, a military fortress, and later a private castle owned by the St. Aubyn family since 1659. 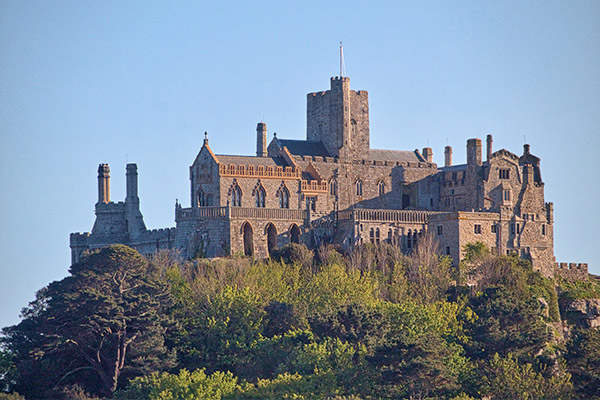 St. Michael’s Mount Castle © Marktee1
We’re fond of the local legend of Jack the Giant Killer. The Mount, as legend has it, was built by the giant Cormoran who would wade ashore to snatch cows and sheep as they grazed in the fields on the mainland. A local boy rowed out to the island and, while Cormoran slept, dug a deep pit on the Mount’s slope. In the morning Jack blew his horn to awaken the giant who obligingly ran down the mountain, falling headlong into the pit. 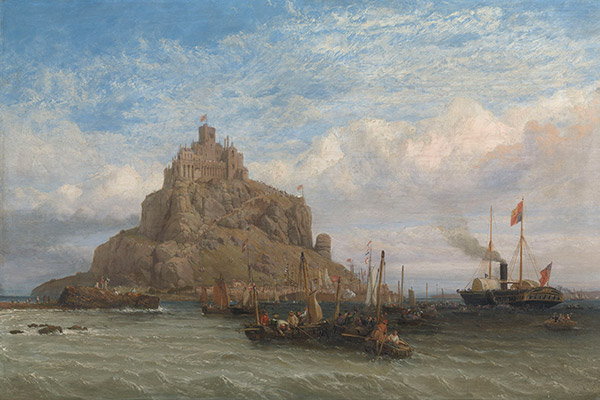 The Royal Yacht Passing St Michael's Mount
Clarkson Stanfield (1793-1867), oil on canvas
This is just one of the many legends attributed to Jack who went on to slay the man-eating giant Blunderbore, break Lucifer’s spell on an enchanted lady, behead the two-headed giant Thunderdel, and finally kill off the giant Galligantus to free a Duke’s daughter who had been transformed into a white doe. She is restored to her true shape, marries Jack, and they live happily ever after! 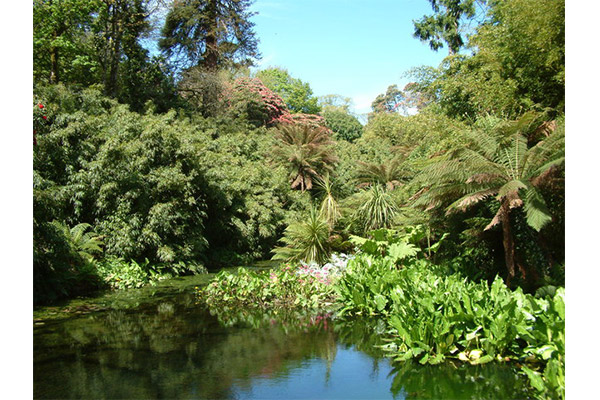 The Lost Gardens of Heligan
One of England’s most mysterious estates was lost to the brambles of time since WWI and reawakened in 1990 to become Europe’s largest garden restoration. At the end of the 19th C, Heligan’s thousand acres were at their zenith, but with the outbreak of WWI, the estate’s workforce went off to fight in the trenches, many sadly never to return. Like Sleeping Beauty, bramble and ivy drew a green veil over the gardens. 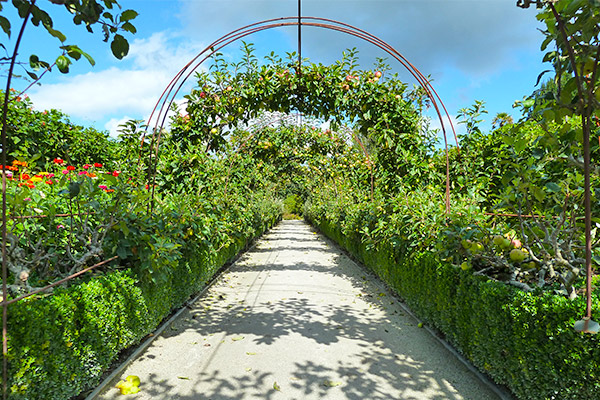 Northern Gardens © Rob Young
The land remained untouched until the 1970s when the House was sold and split into apartments. The gardens were rediscovered in 1990 by a distant relative of the Tremayne family who had owned the estate. Restoration was undertaken by Tim Smit, the same architect who conceived The Eden Project, the largest greenhouse complex in the world. 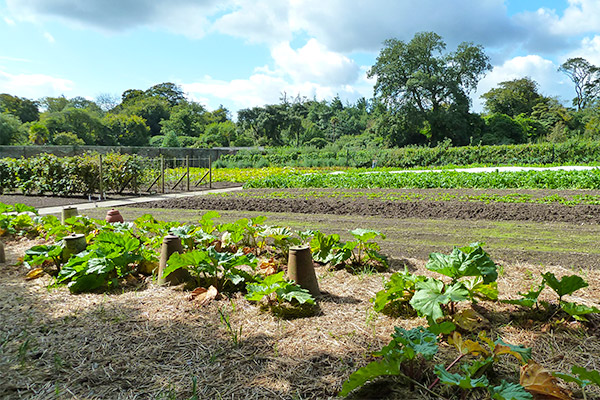 Lost Gardens of Heligan Northern (vegetable) Gardens © Rob Young
Today the spectacular gardens include The Pleasure Grounds with historic plantings of Camellias and Rhododendrons, jungle gardens with an exotic palette of plants brought back by intrepid Victorian plant hunters and recent collectors, and productive vegetable gardens with over 300 varieties of mostly heritage fruit, vegetable, and herbs. It remains a magical place. 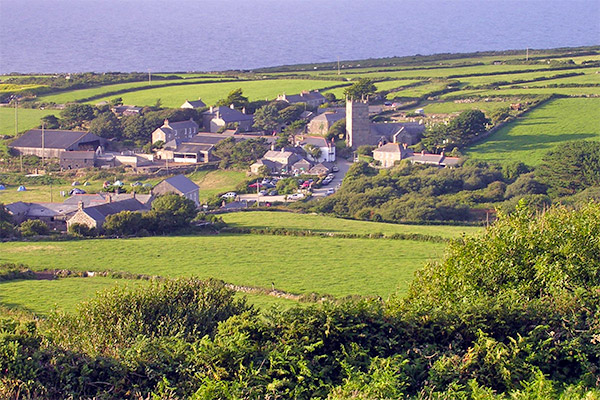 The Village of Zennor
D.H. Lawrence described the village where he and his wife Frieda lived for a year as ‘’nestling under high shaggy moor-hills and a big sweep of lovely sea beyond… lovelier even than the Mediterranean… It is the best place I have been in”. 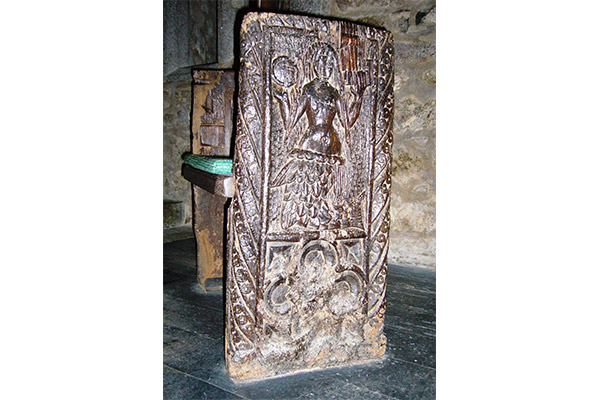 The Mermaid of Zennor, wood-carved bench end at
Zennor Church, Cornwall, late fifteenth century  © Tom Oates
Folklore tells of the mermaid of Zennor, the story behind the 15th C carving of a mermaid in the parish church of St. Senara. A beautiful woman with a fine singing voice came to Zennor Church occasionally to join the congregation in singing psalms. No one knew where she came from or how she maintained her youthful good looks, year after year. She fell in love with the best singer of the parish, who followed her one day after church, never to return. 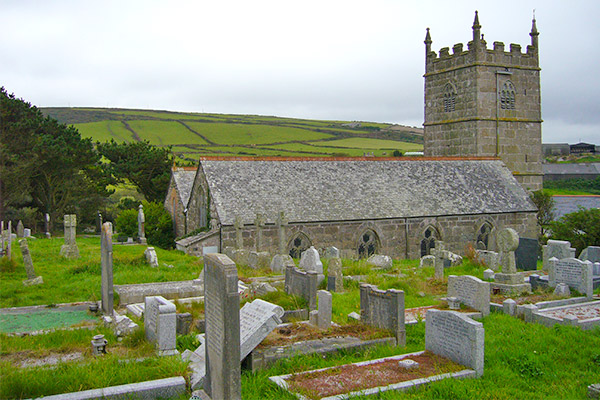 One day much later, a fishing vessel cast anchor out in the bay; soon after a mermaid came alongside and hailed the ship. Rising out of the water as far as her waist, with her long hair floating around her, she sweetly asked the captain to raise his anchor just for a minute as it was blocking the door to her dwelling and she was anxious to get in to her children. To commemorate these unusual events, the sailors commissioned the carving in holy-oak of the mermaid holding a comb and looking glass which may still be seen in the village church. The beautiful figure of the mermaid also appears on the bronze dial of the church’s clock tower.

Join us in May 2022 as we walk selected trails on the Southwest Coast path, visiting each of these legendary locations.
Full Webinar Library