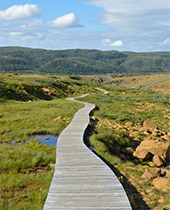 There are just two places on earth where you can step onto mantle rock to feel the earth’s ancient history. Newfoundland’s Tablelands is one of them. The area is world-renowned for its complex geology. Remnants of molten rock? Remains of the ocean floor?

Read on for the geology primer...

Gros Morne National Park in western Newfoundland, was declared a UNESCO World Heritage site to recognize its unique geological landscape. What makes this area so special?
The continents we live on are islands of relatively thin and light weight crust that float on the denser mantle. The mantle is heated by the Earth’s hot core and forms convection cells which rise at mid ocean ridges and are pushed down at subduction zones, often with great excitement (geologically speaking) - think of Mount St. Helens and the Ring of Fire! 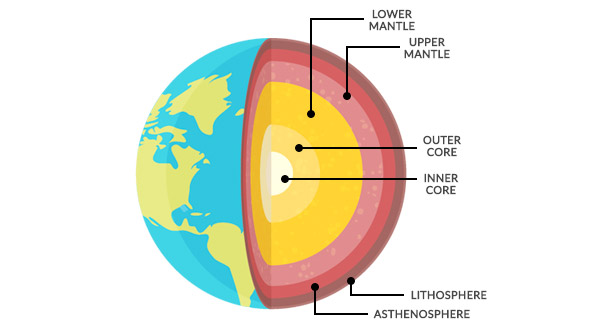 Mantle rocks are ‘mafic’ i.e. composed of magnesium and iron minerals, green in colour. Usually when we see them at the surface it’s a result of magma erupting from volcanoes or being intruded into crustal rocks. Geologists originally thought that the Tablelands were the remnants of magma from deep in the earth that had intruded into sedimentary rocks.

However, in 1967, geologist Robert Stevens identified pieces of chromite in the surrounding sedimentary rocks. The chromite had eroded from the mantle rock proving that it had not been intruded into the sedimentary rock, but predated it. 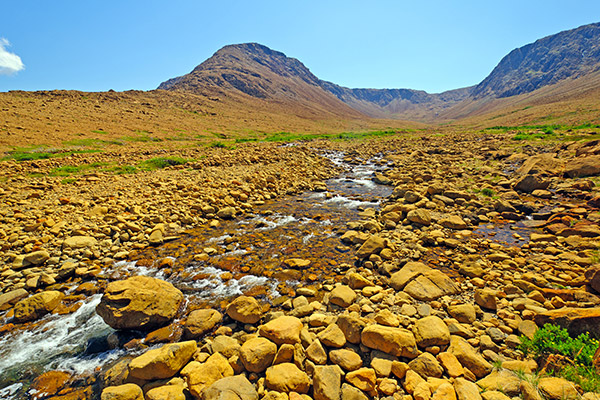 He concluded that the Tablelands are a rare Ophiolite complex– a section of the Earth’s oceanic crust and the underlying upper mantle that, instead of being pushed down in a subduction zone, was pushed up onto continental crustal rocks. The Tablelands are the remnants of ancient ocean floor, the Iapetus Ocean, that existed five hundred million years ago.

‘Ophiolite’ means snakestone in Greek (ophio – snake and lithos – stone) and named for the bright green, snakeskin-like serpentine rocks – such as the peridotite found at the Tablelands. 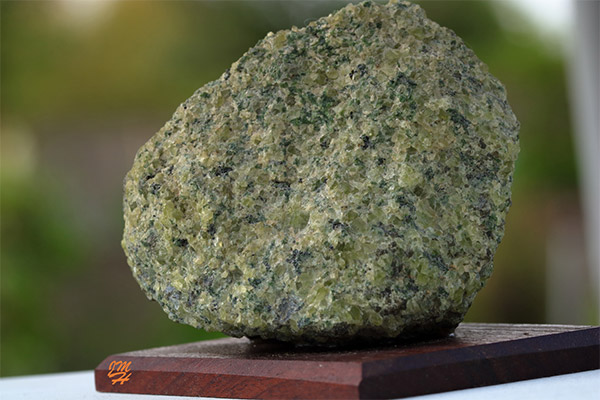 At this point, with all the emphasis on green rocks, you may be thinking: but the tablelands aren’t green, they’re rusty-brown! Well, when the mafic rocks with their high iron content are exposed to oxygen in the air, the iron oxidises – rusts. If you can find a freshly broken piece it will have a beautiful mottled green colour. 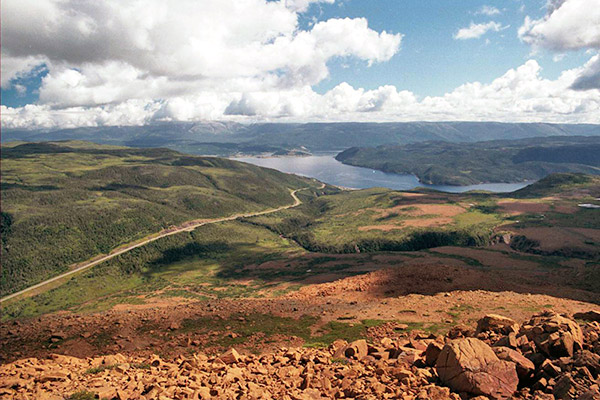 Step on mantle rock as you walk the Tablelands of Gros Morne, Newfoundland with us! To view all our upcoming tours that visit this unique place, click to the Canada tours page here.
Full Webinar Library