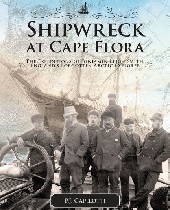 Benjamin Leigh Smith discovered and named dozens of islands in the Arctic, yet refused public accolades and published no account of his pioneering explorations.
Leigh Smith’s first expedition, to the Arctic archipelago of Svalbard, resulted in thirty-three new place names and included the discovery of twenty-two new islands. He defined the northeast limits of Svalbard at what is now known as Cape Leigh Smith. His 1873 voyage to Svalbard came to the rescue of the more experienced Swedish explorer A. E. Nordenskiöld and in the process won Leigh Smith the Royal Swedish Order of the Polar Star.
But it is his spectacularly successful reconnaissance of Franz Josef Land in 1880 on board his private research vessel Eira for which Leigh Smith is justly famed. In just two weeks in August, 1880, Leigh Smith defined the southern coast of Franz Josef Land, charting 110 nautical miles along a previously unknown Arctic coastline. His escape from the Arctic in 1882 – after Eira sank off Franz Josef Land – rivals the small boat voyages of Ernest Shackleton and Fridtjof Nansen.

Archaeologist and writer P. J. Capelotti details Leigh Smith’s five major Arctic expeditions and places them within the context of the great polar explorations in the nineteenth century.
Webinar Library