The Riveting Story of the Trans-Siberian Railway

By: MIR, our local partners in Mongolia and Russia 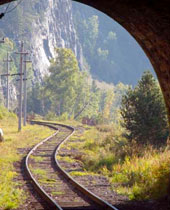 The fabled Trans-Siberian Railway rolls briskly across seven time zones and 5,772 miles of taiga, steppe and mountain, pausing along the way in places that bring the traveler face to face with the fascinating cultures of Russia.

Sprawling rivers, dense taiga forest, mile upon mile of swampy permafrost, subzero temperatures in winter, swarms of bloodthirsty mosquitoes in summer, and large carnivorous animals, including wolves, bears, and, in the east, the terrifying Siberian tiger, were some of the obstacles that had to be overcome to create the continent-spanning Trans-Siberian Railway. 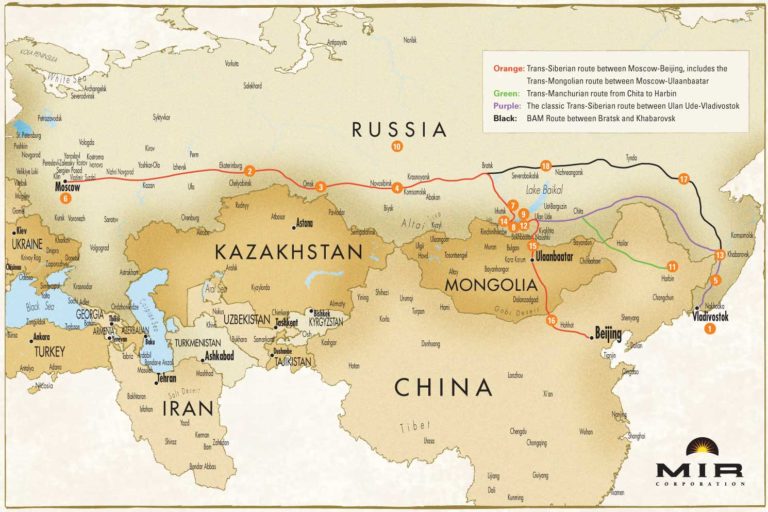 The Beginning
Czar Alexander III, after much debate, announced in 1886 his intention to build a railway from one end of the country to the other. Five years later, in 1891, the heir to the throne, soon-to-be-Czar Nicholas II, laid the cornerstone of the railway station in Vladivostok on the far east coast of the country, and emptied the first wheelbarrow of dirt onto the proposed tracks. Simultaneously, work began eastward from Chelyabinsk in the Urals; the line from Moscow arrived there in 1892.

Built in sections, the railway slowly took shape, with crews of conscripts and gulag prisoners swelling the ranks of the railway workers. By 1900, a traveler could board the train in Moscow, ride to Irkutsk in the middle of Siberia, take an ice-breaker ferry across Lake Baikal, re-board the train to Sretensk, and then board a steamer for the cruise up the Shilka and Amur Rivers to Khabarovsk. 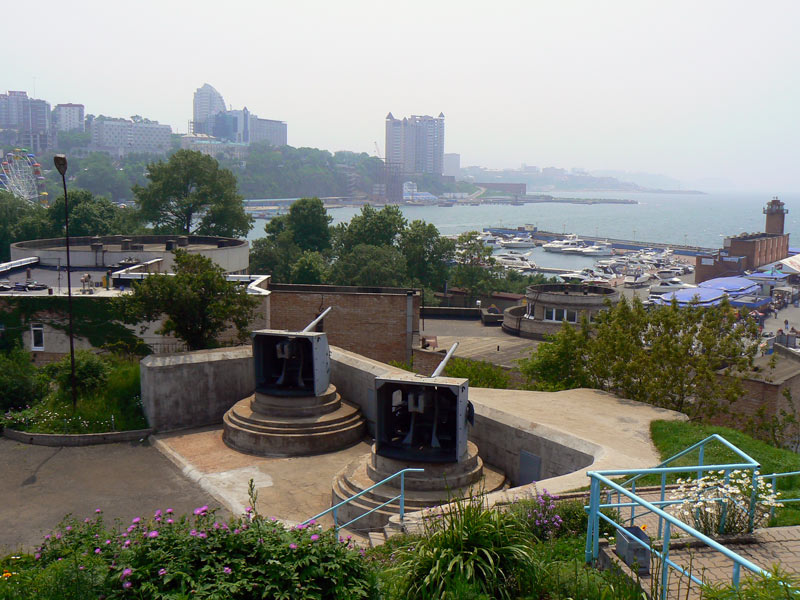 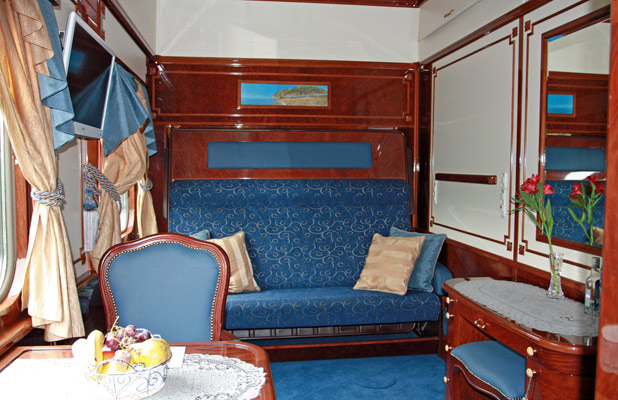 World’s Fair
The railway was celebrated at the 1900 Paris World’s Fair, the Exposition Universelle, with an exhibition that included luxurious rail carriages, such as a salon decorated in Louis XVI style with silk armchairs, a sofa and a piano; and a traveling Orthodox chapel car. The plush rail cars drew the attention of some of the 50 million fairgoers, and foreign travelers began to ride the Trans-Siberian, though the reality of the trip was far removed from the luxury presented at the fair.

Alexander III had ordered the cheapest possible construction of the great railway line, and reconstruction of parts of the line became necessary almost immediately. Lightweight and low-quality iron had been used for the rails, which meant that the cars could not carry much weight; it also meant that everyone on board was in for an extremely slow and bumpy ride, marred by frequent breakdowns and lengthy delays. 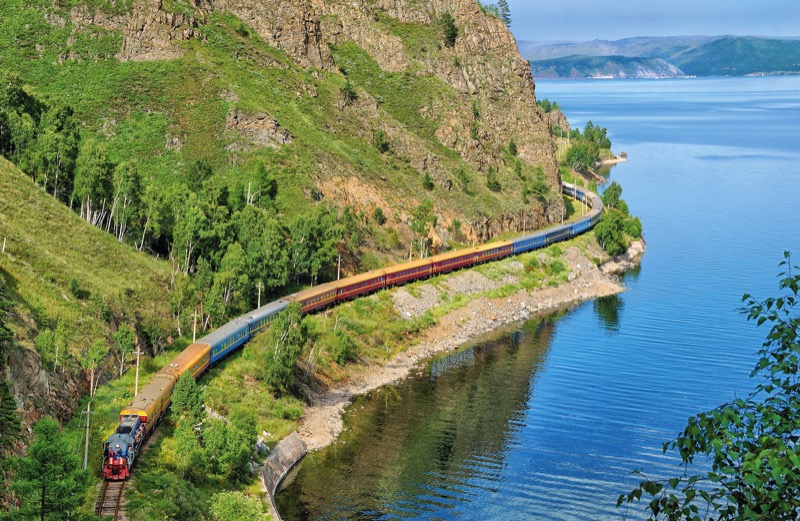 The Baikal Saga
A major challenge facing the Russian railroad builders was what to do about Lake Baikal, sitting squarely across Siberia’s midsection. 395 miles long, 49 miles wide, and shaped like a banana bisecting the proposed line, it had to be either crossed or circumvented.

The government decided that it would be so costly and time-consuming to build a rail line around the rocky southern end of the lake that they devised a temporary fix, using ferries to transport the train cars and their passengers across the lake to meet up with the next leg of the railway.

Two ice-breaker ferries were commissioned and built in England, then disassembled and shipped to the lake, where they were painstakingly reassembled, piece by piece – 6,900 of them for the first, the SS Baikal. On its mid deck Baikal had three sets of tracks that held 24 carriages and a locomotive. There were enough cabins for 200 passengers to stay out of the weather during the four-hour crossing. The Angara was a bit smaller, meant for goods and passengers only. 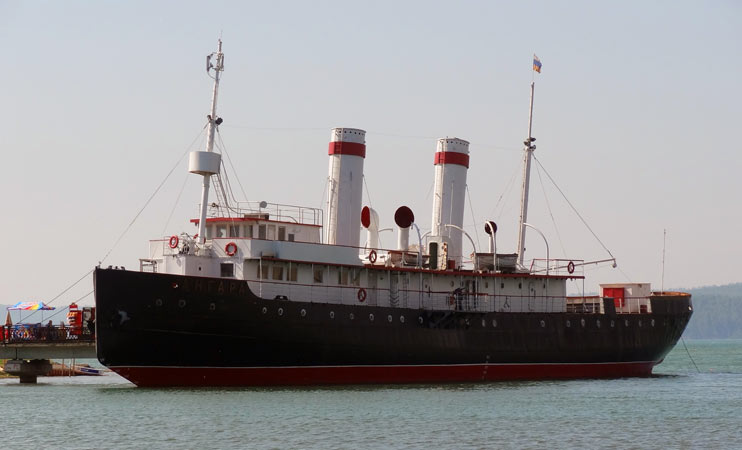 In the long run this solution proved problematic; even the massive ice-breaker ferries could not always manage the trip during the cold winters, when the ice could measure up to five feet thick. At those times, passengers and freight had to be hauled across the ice on sledges, while draft animals pulled the train cars on rail lines laid across the frozen lake. 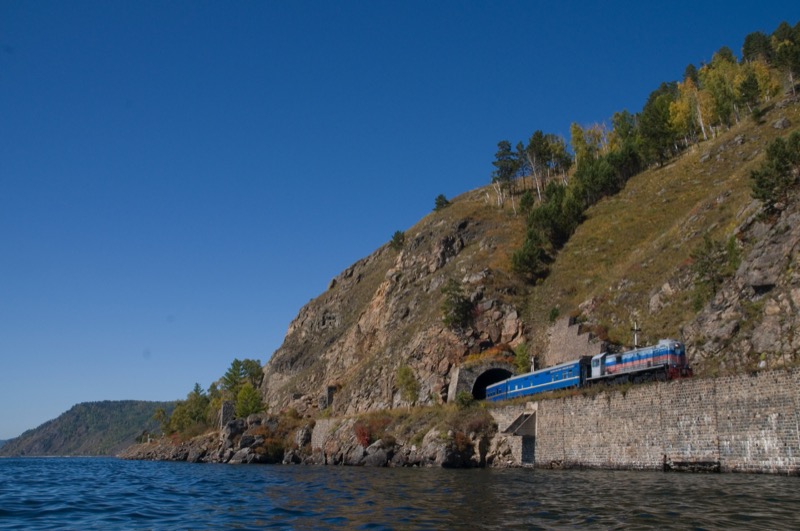 Circumbaikal Railway
Baikal’s southern shore consists of rocky cliffs that plunge into the lake, and the engineers knew a rail line here would be a major undertaking. They began in 1899 and proceeded slowly and laboriously.

As the Russo-Japanese war heated up, the czar hired Italian and Armenian master stonemasons and ordered 10,00 laborers to the site, where they eventually dug more than 30 tunnels through the rock, and built some 300 bridges and viaducts. Every two miles of track required a wagonload of explosives. The beautifully built bridges and tunnels are still in use today.
When the line was finally completed in 1905, the train had to slow to negotiate the twists, turns and tunnels of this complicated and beautiful leg of the route. It was used for regular train traffic up until 1950, when the Irkutsk-Kultuk shortcut was finished. Today the train runs on this track solely for the delight of sightseers. 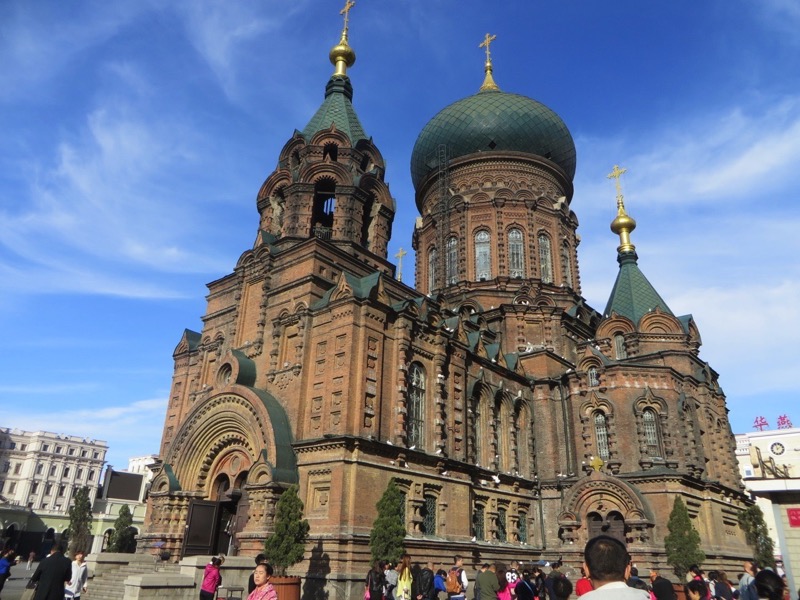 Across China on the Manchurian Railway
Engineers plotting the route beyond Baikal initially wanted to build the far eastern leg along the Amur River (the border with China), but, like a route around the lake, it was deemed too expensive and difficult. So the line took a shortcut across Manchuria in northeast China to link Chita to Vladivostok via the Chinese city of Harbin. Called the Manchurian Railway, this part of the rail line was completed in 1901, and traffic from one side of Russia to the other commenced. 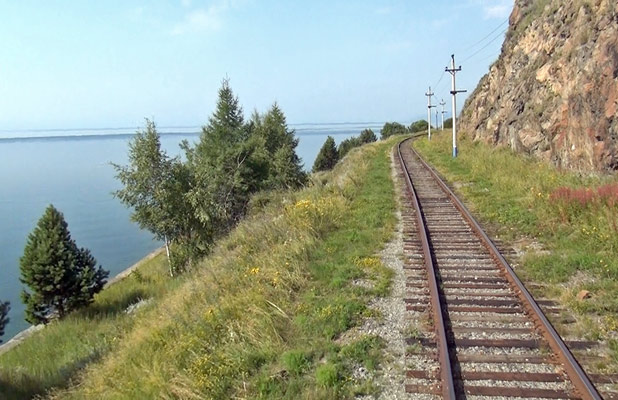 War
The story of the piecemeal development of the Trans-Siberian is bound up with that of the Russo-Japanese War. Hostilities flared into outright war in 1904, and sped up the completion of the Circumbaikal line; the train ferries significantly slowed the delivery of arms and equipment to the front.

The war also demonstrated that the Manchurian Railway was vulnerable to attack, and engineers scrambled for ways to bypass China. 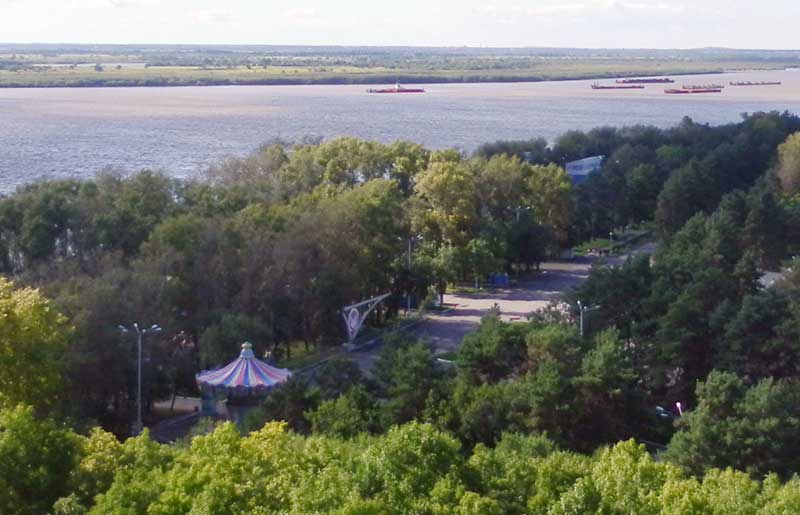 Last Link
After Russia lost its war with Japan in 1905, the Trans-Siberian engineers went back to the drawing board and drew up plans for the Amur Railway, the line that had been pronounced too costly and challenging to build. Construction began in 1908 amid the same difficulties that had plagued the earlier work – a critical lack of laborers to brave the virgin taiga, rivers, swamps, wild animals, permafrost, and hordes of huge mosquitoes.

The last link in the Amur Railway, the 8,500-foot Amur River Bridge at the city of Khabarovsk, was delayed when a German cruiser in the Indian Ocean sank the ship carrying the last two of its metal spans. 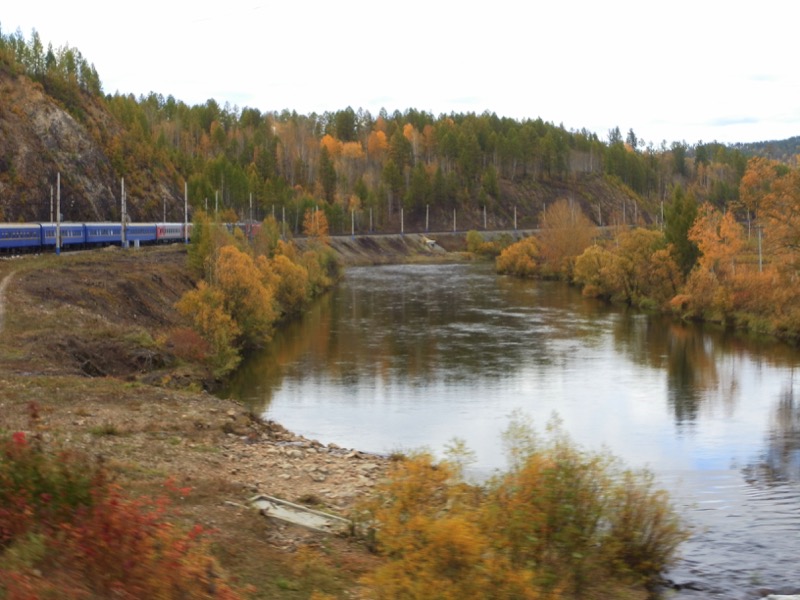 Finally, on October 5, 1916, the bridge was officially opened and the Trans-Siberian ran from Moscow to Vladivostok – exclusively on Russian soil. Just in time for WWI, revolution, and civil war.

It was only in 1931 that the Soviets reopened the route to foreigners. 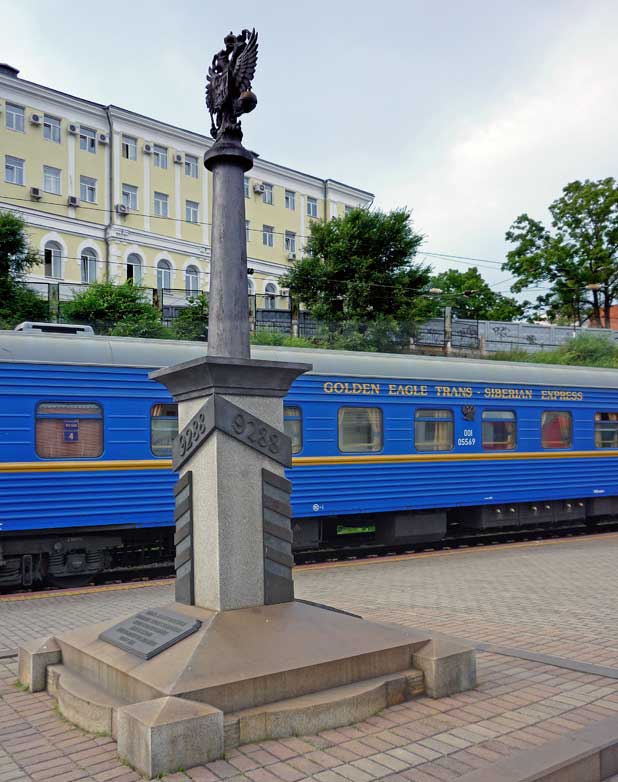 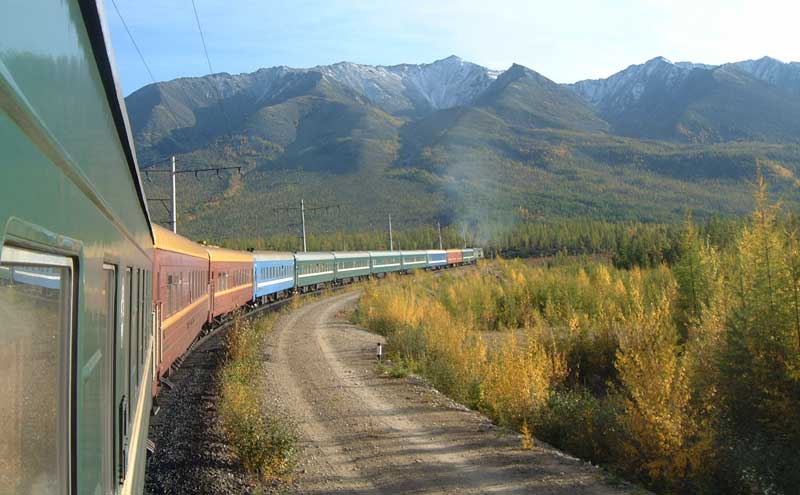 But Wait – There’s More! The BAM Line
Joseph Stalin ordered the building of the BAM (Baikal Amur Magistral). Worried that the Trans-Siberian Railway tracks along the Chinese border were still at risk of being attacked, he had his engineers plot out an alternate route that took off north of Baikal about two thirds of the way between Moscow and Vladivostok, and skirted the remote north shore of the great lake.
The project began in 1939, using gulag labor, but languished after the ready supply of prisoners dried up at the dictator’s death. The last segment of the line, the nearly 10-mile Severomuysk tunnel, was finally completed in 2004, the end of the long story of the huge and heroic undertaking that was the building of the legendary Trans-Siberian Railway. 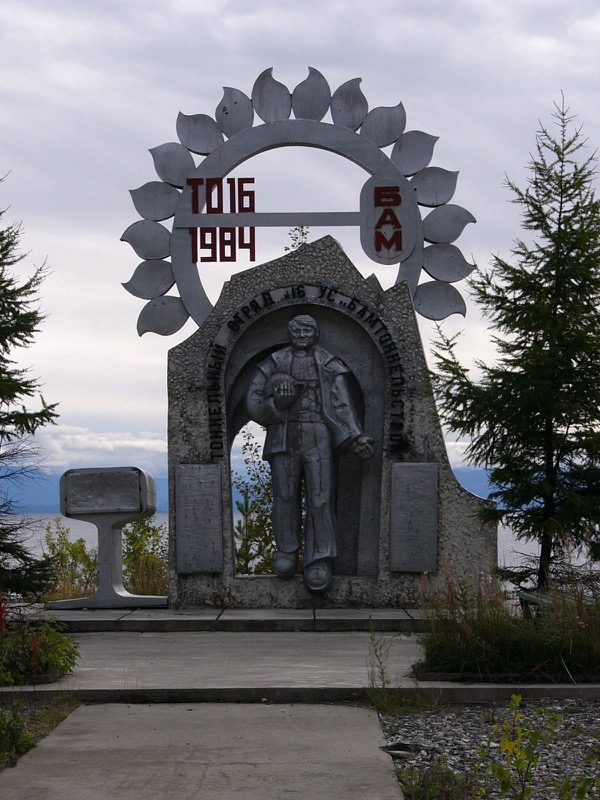 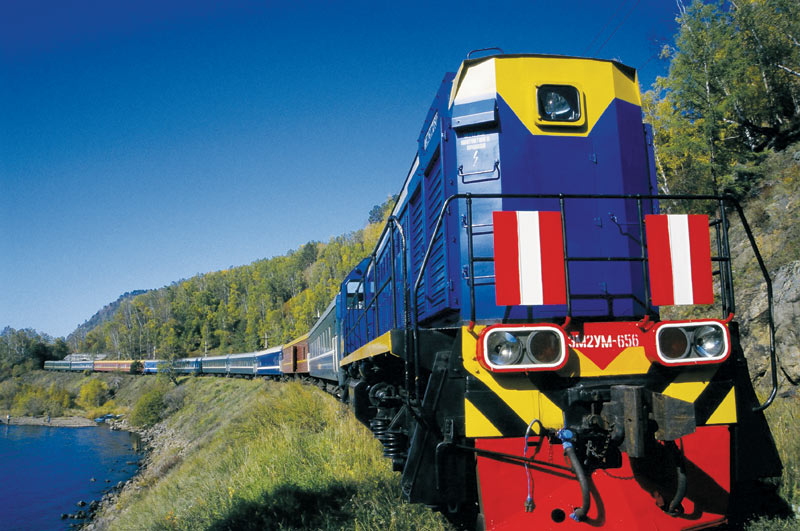 Worldwide Quest is travelling the Trans-Siberian Railway, May 14 - 27, 2020. Click here to see the tour and request a detailed itinerary!
FULL WEBINAR LIBRARY