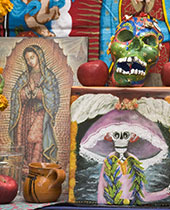 Every year, at the beginning of November, something extraordinary takes place in many areas of Mexico: Día de Muertos (Day of the Dead) festivities. While it may seem ghoulish to gringos that “death” and “festivities” can go hand-in-hand, for most Mexicans, it’s very natural. The dead are not remembered or commemorated. Instead they are considered present.

We will make our home in the historic centre of Mexico City. For a week we will enter the world where Mexicans celebrate with their beloved dead. We will learn how they prepare, what they do and why, and how they return to ordinary time when the spirits go back where they came from on November 2nd.

During the days leading up to Day of the Dead, we will pop into markets and visit public squares and cemeteries to see the extent of preparation. In the cemeteries, families arrive early in the day laden with brooms, buckets, flowers, candles, favourite food and drink of the dead, and everything else they need to set up their ofrendas (altars) on top of the graves. Each is different, and some are stunningly creative.

During the two days of celebration we will join in the merriment. We will follow a parade of catrinas (Mexican characters dressed as “elegant death”). We will join one of the street parties taking place throughout the city. We will attend traditional Day of the Dead vigils in two special locations in the southern part of the city. Family members, wrapped in heavy blankets, sit around eating and drinking tequila, chatting about the departed and singing their favourite songs while children play between the graves.

We will visit a museum featuring the works of Frida Kahlo and Diego Rivera and learn about their fascination with death.

We will read and discuss the works of two extraordinary Mexican writers, much concerned with death—Juan Rulfo’s legendary novel Pedro Páramo and selected poems by Octavio Paz, one of the most influential writers of the 20th century.

No words, no picture can do justice to describe the beauty, the tradition, the feeling of Día de Muertos.