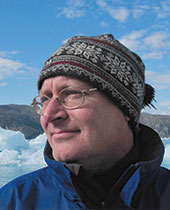 Climate change affects us all, but none more so than the landscapes, animals and peoples of the circumpolar north. Mark Nuttall, the 2016 recipient of the J. Gordin Kaplan Award for Excellence in Research, knows this firsthand.

The north is emerging as a resource-rich, geo-politically contentious area. As one of the world’s most influential social scientists in Northern and Circumpolar studies, Nuttall is well-positioned to reflect on its implications, specifically the effects of increased northern development on Indigenous peoples.

“I’m interested in understanding human-environment relations,” he says, “especially in the face of multiple threats, challenges and opportunities. North issues are generic issues that have global relevance. [They are] human issues and environmental sustainability issues. The North is an indicator of the state of health of the planet as a whole."

Through his academic rigour and socially responsible practices, Nuttall deftly bridges the complex interests of transnational governments, peoples and industry and has been instrumental in bringing local and Indigenous perspectives to the geopolitical table. This “rare combination of expertise” is nourished, notes Hugh Beach (Professor and Chair, Cultural Anthropology, Uppsala University, Sweden) “by his remarkable Greenlandic language fluency on the one hand, and his extensive organizational involvement in Indigenous rights, environmental justice and cultural sustainability on the other.”

The breadth of Nuttall’s publications is striking, ranging from the groundbreaking 2005 three-volume Encyclopedia of the Arctic, to his most recent publication, The Scramble to the Poles: the geopolitics of the Arctic and Antarctic (co-authored by Klaus Dodds, 2015). Among his 170+ publications, Nuttall has even contributed a chapter on Inuit football in The Global Game (2008)!

Nuttall’s cultural sensitivity and leadership is reflected in the large number of international committees, boards and panels on which he sits, in addition to multiple academic appointments including Visiting Professor of Climate and Society at the University of Greenland and Greenland Institute of Natural Resources in Nuuk and Senior Associate Scientist at the Stefansson Arctic Institute in Akureyri, Iceland.

In 2008, Nuttall was elected a Fellow of the Royal Society of Canada, and in 2010, he became a member of the Norwegian Scientific Academy for Polar Research.

“These honours,” says Pamela Willoughby, chair of Anthropology, “show the vital impact of his research in the North and its role in influencing government policy as well as in the survival of Indigenous peoples throughout the Circumpolar North.”

Since moving from Scotland to Edmonton in 2003, Nuttall has been Henry Marshall Tory Chair in the Department of Anthropology, supervising or co-supervising graduate students from Denmark, Greenland, Scotland and the University of Alberta. Recently, he assisted with the reorganization of the Canadian Circumpolar Institute into UAlberta North.

When Nuttall accepted his position at the University of Alberta, he remarked that he doesn’t mind cold weather. Indeed. He has made it his life’s work.

Mark Nuttall was honoured at the recent University of Alberta Celebrate! Teaching.Learning.Research event on September 21, along with fellow honourees from the Faculty of Arts.
FULL WEBINAR LIBRARY