First-hand Accounts from the Regina Rifle Regiment in the Rhineland, 1945 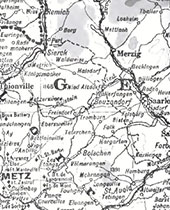 “The shelling and fighting in these woods have been just as bad as anything encountered in NORMANDY.”

This passage was written in the War Diary of the Regina Rifle Regiment at 2400 hours on 18 February, 1945. Considering the well-documented drudgery and sacrifice experienced by Canadian soldiers on the beaches of northern France in June, 1944, such a direct comparison is poignant.
The last hour of February 18th, 1945 was the conclusion to three days of strategizing, front line combat and devastating loss, but it also marked a small victory for the Regina Rifle Regiment and their partners during Operation Veritable in the Battle of the Rhineland. Fully on the offensive, the Allies strove to break the last major line of German defence in Rhineland, and a big part of this was an area between the Maas River to the west and Rhine to the east in a forested pocket in northwest Germany adjacent to the Dutch border. 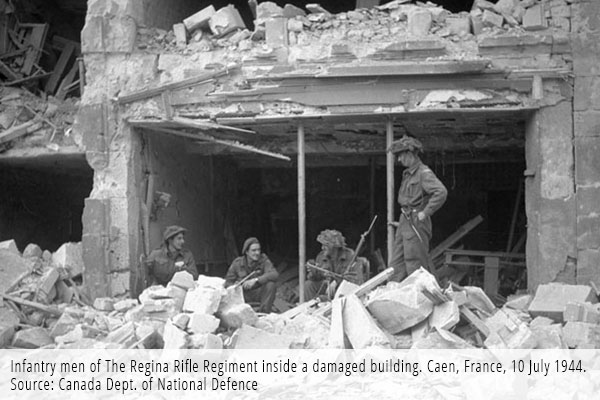 At 1330, “Attack gets under way” and then between 1530 and 1630 it refers to “encountering considerable opposition for enemy is in the woods [Moyland Wood, near Calcar].”

The Regina Rifles were called in to Moyland Wood after the 15th Scottish Division was stopped there by German paratroops. Their target area was the south part of the woods; the partner Canadian Scottish Regiment would target the south. According to Major Douglas Gordon Brown who led one of the Regina Rifle companies in the battle of Moyland Wood, fighting in the woods is never an easy task for the attackers:

“In all fighting in heavily wooded areas, the defender has all the advantages … A determined force of 200 defenders, in heavy woods, can hold off hundreds of attackers who simply cannot see their enemy.”

A War Diary entry from 1230 hours on 18 February, 1945 reiterates the challenges of woodland combat:

“We again attack woods … From the commencement of attack going is very heavy. The enemy have considerable number of heavy machine guns … Also many men, although not actually casualties are suffering from exhaustion due to continual shelling and nature of the woods.”

The “nature of the woods” was particularly hostile at this time of year due to torrential rainfall:

“…problems of supply and transport were extremely acute due to flooding, mud and lack of alternative routes.”

Despite Hellish conditions, the Regina Rifles prevailed in the north part of Moyland Wood, while the efforts of the Canadians Scottish Regiment and the Winnipeg Rifle Regiment secured the remainder of this small, but crucial piece of Rhineland.
As we get ready to celebrate Canada’s sesquicentennial in 2017, Worldwide Quest is offering a number of tours that reflect the Canadian experience, contemporary and historic, at home and abroad. The WWII Canadian Battlefields: Paris to Berlin tour, April 30 – May 12, 2017 is hosted by former University of Saskatchewan Chancellor Vera Pezer and guided by military historian Julian Whippy. This tour follows the route of the Canadian regiments, such as the Regina Rifles and the South Saskatchewan Regiment, who were active in this area and provides exceptional insight into the history of the period.