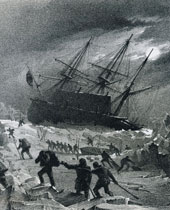 We are beyond excited today at Worldwide Quest! We've been planning next summer's two Northwest Passage expeditions all year, and each meeting has included the familiar phrase, "wouldn't it be great if Franklin's second ship was discovered?" Well, as announced early this afternoon, our wishes were answered by a team from the Arctic Research Foundation!

The HMS Terror was discovered on September 3rd in Terror Bay on the southwestern shores of Nunavut's King William Island. On September 3rd of next year, we will be just wrapping up the second Northwest Passage voyage, after having stopped at key Franklin expedition sites such as Beechey Island. Coincidentally, the HMS Erebus was discovered in early September, 2014 -- a year prior to the completion of our highly successful 2015 Northwest Passage Expedition. 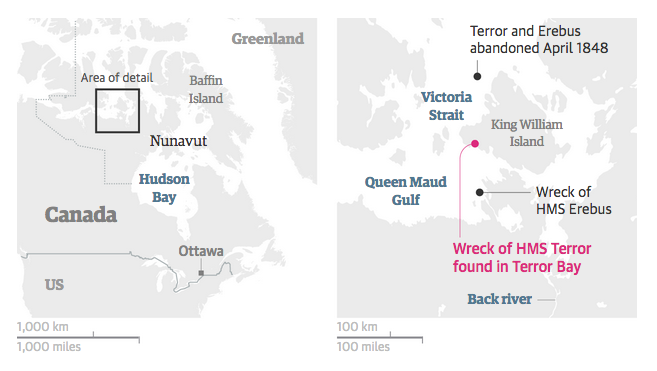 Maps courtesy of The Guardian.

Early reports suggest that the Terror's discovery may help fill in some crucial blanks in the Franklin story, and could perhaps even serve to re-write sections of it. For now, stayed tuned and expect plenty of exciting new questions to arise in the coming months. By the time we arrive at King William Island on next summer's first expedition, hopefully many of these questions will be answered...