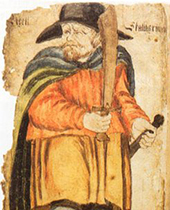 A friend recently asked me to name three things that keep drawing me back to Iceland. The first two were easy and have remained the same through each trip I’ve made.

First is the place itself, its wild beauty – mountains, volcanoes, glaciers, fjords, waterfalls, hot springs, geysers, lava fields and moss fields. Iceland is simply spectacular. When you go there, you’ll want to bring along an extra supply of superlatives, because you’ll find yourself using them up fast
Books are the second thing that draws me back to Iceland. It’s a country where literature matters. Our Classical Pursuits trip to Iceland will feature some of the best of Icelandic literature, with discussions of two of the classic Sagas, a charming coming-of-age story by Iceland’s Nobel Prize winner Halldór Laxness, and an intriguing novel by the contemporary writer Sjón.

On a previous trip, I was also much interested in exploring Icelandic craft and design. This time, though, I’m very keen to look more closely at the size and scale of Iceland as a country and as a culture. I’m curious about how Iceland’s small size, population and isolated location affect daily life and Icelanders’ sense of identity.
This was highlighted for me by the recent news reports of the resignation of Iceland’s prime minister, amid the fallout from the “Panama Papers.” Videos showed crowds of some 15,000 people protesting outside the Icelandic Althing (Parliament building) in the largest such demonstrations ever in downtown Reykjavík. That number would be a small turnout for a Chicago Cubs game at Wrigley Field; in Iceland, it represented 5 percent of the population and forced the resignation of the head of the national government.

With 320,000 people, Iceland is a small country. That is not immediately evident in Reykjavik, where two-thirds of the country’s population lives. Reykjavík is generally well equipped with the museums, university, galleries, restaurants and entertainment you would expect from a modern—if modestly-sized—city. But where we in North America can choose among visits to, say, Boston or Montreal or Chicago or Austin or Quebec City, Reykjavík is the one city of Iceland. The next largest population center is a town on the Arctic Circle with 30,000 residents.
The different scale of the country is also reflected in the traditional way Icelanders are named. Unlike the family name system used in most Western countries, Iceland retains a patronymic (and occasionally) matronymic) naming system. Thus a man named Jón Einarsson might have a son named Ólafur and a daughter named Sigríður. His children, however, would not carry his second name of Einarsson; they would be named Ólafur Jónsson and Sigríður Jónsdóttir. Because last names aren’t stable from generation to generation, Icelanders refer to one another by their first names rather than their last. For centuries, the country’s population was small enough and non-mobile enough for that to make sense. The first-name basis is something Icelanders are quite fond of; I think it promotes an intangible kind of closeness, maybe also a current of equality, and it seems different from the first-name familiarity that’s grown common in North America. (Icelanders, incidentally, are listed in the telephone book alphabetically by their first names.)

It’s possible that I might not be as interested in the small size and scale of Iceland if I had grown up in a small town in North America. I confess to being a lifelong urbanite, and Iceland’s uncrowdedness is one of its great attractions for me. I hope you’ll join us to discover what will have you going back again and again.