A Polar Bear Record: Counting Back From 43 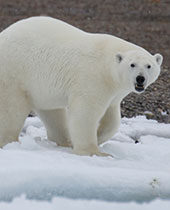 “We’ve got a visual on a Walrus in the water straight ahead,” echoed over each zodiac driver’s radio. Expedition leader Boris Wise had just turned flagging hope into fervent anticipation. Our final wildlife target on our last full day was a long-shot at best as we circled Monumental Island in the southern Davis Strait. We had almost completed a full circuit of the island amidst the only inclement weather of the trip. It was one of those gray days with an almost ethereal misty rain as the clouds hung low and deep rolling waves sent us steadily up and down in the surf. As the parade of zodiacs collected around the lead vessel, up popped a burly, tusked head...and then another...and another still. Soon, the one Walrus that we all would have been thrilled to see turned into 60. It may have even been 70; it’s tough to count when you’re bouncing in the waves. Needless to say, excitement abounded—but not just because of this surprising encounter. Only minutes before, we had just reached a new high water mark for Polar Bear sightings. 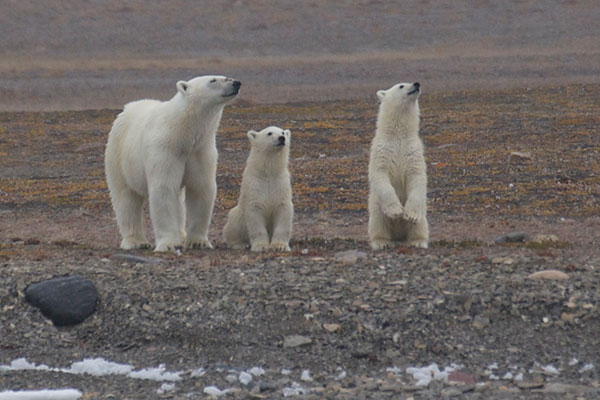 The record high number of Polar Bears seen on a One Ocean Expeditions Northwest Passage voyage was 42. During trips partnered with Worldwide Quest, the number was a shade lower. We had just hit 43. Of course that impressive number loses its lustre if all sightings consist of a whitish speck on a distant shoreline—but that was far from the case with almost every sighting in 2015.

We approached Monumental Island at 40 bears for the trip, with a better than even chance of seeing 1 or 2 at this site. Already, passengers were quipping about how we would break the tie if we ended with 42. Were we too conservative with our estimates earlier in the trip? Could we count those fresh tracks on the shore deep in the Gibbs Fjord? A bear had just been there, right? It was an interesting study in human psychology to see how determined some were to claim this small victory. As luck would have it, the possibility of a tie presented itself rather quickly when 2 bears appeared as we rounded a corner. Both were resting a fair distance apart, but at excellent range for viewing and taking photographs. Knowing that they may be the final bears of the trip, all took in the moment with heightened attention and admiration. Here were 2 of the Arctic’s apex predator looking positively defeated as they endured the most ice-free and, consequently, seal-free time of the year. We drifted around the corner a little further and there it was: Polar Bear number 43. A new record had been set. This resting male took some notice of the gathering zodiacs before opting for higher ground and ascending the steep slope—the mist thicker with each step.

Virtually every first-time Arctic traveller dreams of seeing a Polar Bear. Observing one on sea ice, however, is the ultimate goal as their existence in the Arctic is contingent upon extensive sea ice cover (dotted with occasional breathing holes through which seals can be captured). It took about a week to see a Polar Bear away from land and it was well worth the wait. A resting bear on an ice floe offered excellent looks on September 1st. The following day, good fortune went a step further as a large male was sighted not just on an ice floe, but on a kill. 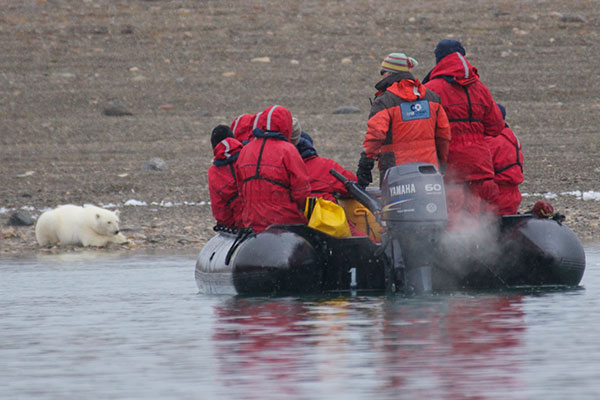 These superlative moments at the end of the trip punctuated a continuous stream of first-rate Polar Bear sightings where at least one bear was seen on 8 of the 11 full days of the voyage. The balance of them were seen singly or in groups of 2 or 3 as is typical unless you happen upon some luck—that is, unless the Polar Bears happen upon a rare summer bounty of food. Such was the case at Coningham Bay on the southeastern coast of Prince of Wales Island where a group of Belugas had met their fate on account of being trapped at low tide in the shallow waters of the bay where they had congregated to perform their annual late summer exfoliation. When we arrived on the evening of August 26th, the Beluga carcasses were essentially beyond recognition and 17 of the main reasons why were feeding, roaming, swimming, lounging and even convalescing nearby. We hadn’t yet seen a Polar Bear on this young voyage—for most passengers, they had never seen one in the wild—and then there were 17. One male shared a carcass with equally voracious Glaucous Gulls and a lone Thayer’s Gull on a rocky shoal; a mother and 2 cubs scampered along a shoreline to the north; several well-fed males loafed in various depressions along a ridge to the west, while others laboured at the top of the same ridge, being careful not to overheat as they digested whale blubber. A swimming bear and a male seemingly nursing a wound rounded out the range of behaviours we witnessed in the everlasting evening light of the Arctic where the sun hangs low and casts its enchanting “Golden Hour” light for much longer than we temperate zone dwellers ever see farther south. 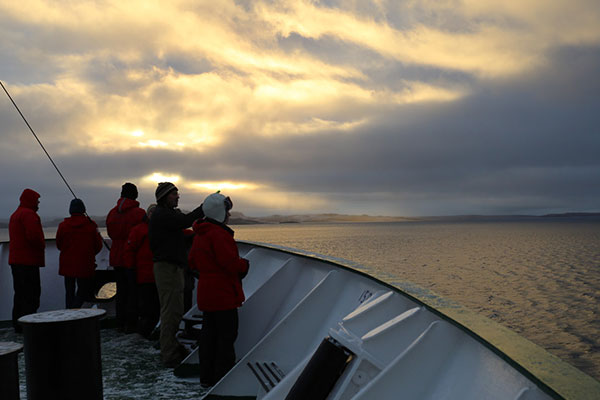 For most passengers, this magical evening was the culmination of a lifetime of waiting to see the animal that personifies the Arctic perhaps more than any other. When a being is held with such reverence, it’s hard not to feel giddy just thinking about seeing that first one. We mull over in our minds all of the possible ways that initial encounter might unfold, to the point where, for a time, it seems impossible that it could ever meet our inflated expectations. Yet, as the zodiacs peacefully floated back to their mother ship with the Arctic sun still hanging low in the sky, there was not a trace of let-down or regret to be had. A stirring foundation had been established for a record-setting voyage through the realm of the Arctic bear.

For a chance to see Polar Bears, click here to get more information about our Arctic expeditions.
Webinar Library