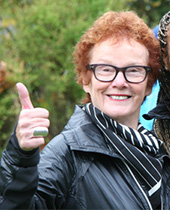 "We are very excited and honoured!"  — Diane and her husband, Doug Clement

The British Columbia Sports Hall of Fame has selected 11 outstanding individuals and one team for induction as part of its 2016 class, the 50th in its history.

Induction recognizes excellence in sport, contribution to sport and the impact on sport in British Columbia, in the categories of athlete, builder, team, pioneer, and media. The BC Sports Hall of Fame Selection Committee is comprised of 15 individuals representing the BC sport community at large, members of the BC Sports Hall of Fame, the Board of Trustees and the media.

he 2016 Inductees, the Hall’s 50th Induction Class, will be formally inducted to the BC Sports Hall of Fame at the Banquet of Champions at the Vancouver Convention Centre on June 9th, 2016.