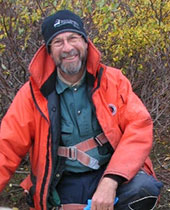 We are thrilled to announce that bear expert Dr. Martyn Obbard will be joining our team of tour leaders!

Even though you may not have travelled with him before, you may already have been acquainted with Martyn (Marty) through his various appearances on Canadian television. His highest profile appearance was undoubtedly the one he made on the CBC’s Rick Mercer Report in 2009, when Rick joined Marty and his team including numerous Algonquin Park staff on a bear research excursion. Marty is a recognized authority on the biology of the American Black Bear and Polar Bear, having led field studies on both of these species in Ontario as part of his work for the Ontario Ministry of Natural Resources. His ample time in the field has afforded him an intimate look into the lives of these animals. Among his finds, he has documented predation by a Black Bear on an adult Moose, and he has even been chased by a curious Black Bear and lived to tell!

For many years, Marty’s work has involved surveying Ontario’s Polar Bear population on the shores of Hudson Bay. Marty will be heading back to Hudson Bay to lead our special Polar Bears of Churchill excursion in October 2016! To learn more about Marty and our tour, please click here.
Webinar Library