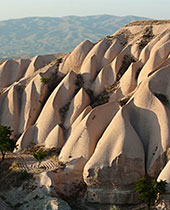 Have you ever been reading a book or watching a movie and found yourself wishing that you could be transported to these beautiful fictional lands?

Cappadocia in Turkey is world-famous for its “fairytale landscape.” But, what exactly does such a landscape entail? Its unique otherworldly features may border on overwhelming to the curious traveller who doesn’t know what to expect. We’ve compared some of Cappadocia’s most stunning landscapes to some popular fictional worlds to help you picture the true scope and magnitude of the region’s unique beauty. 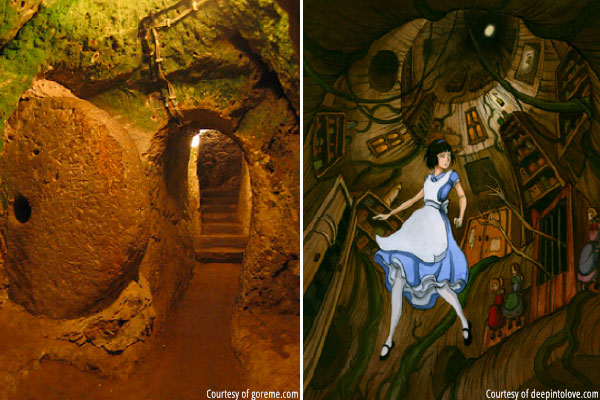 Although young Alice quite literally stumbled into an underground world of disorientation and wonder, she wasn’t the only person with the opportunity to go underground and get a taste of a completely different culture. The underground cities that are abundant in Cappadocia are so strange and surreal that we couldn’t help but find them comparable to Lewis Carroll’s Alice’s Adventures in Wonderland.

While Wonderland appears to be some sort of distorted dreamland with no known origin, Derinkuyu – the deepest of 200 underground cities scattered among Cappadocia - served a crucial and practical role in Turkey’s history. With a capacity of some 20,000 people, the city was initially built as a stronghold in the Arab-Byzantine wars, and was reinhabited by Turkish Muslim rulers as a refuge after the region fell to the Ottoman Empire. 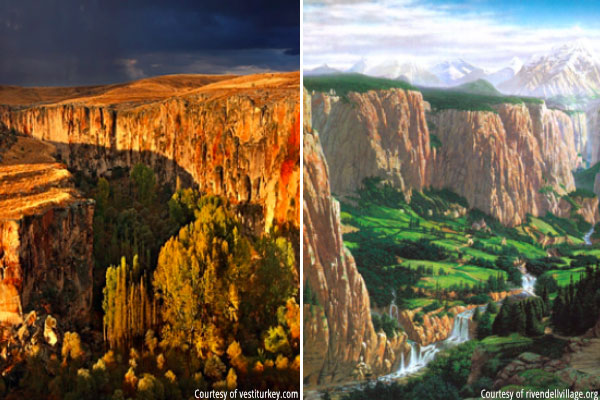 Both of these stunning valleys feature giant rock formations as well as lush vegetation and fresh streams of water. You would think that this Elven residence in J.R.R. Tolkien’s The Lord of the Rings was based off the stunning scenery of Cappadocia’s famous landmark.

While both places are considered in their respective world to be peaceful places of learning with endless nooks and crannies to explore, the Ihlara Valley is additionally famous for its world-class trekking. And whereas in Rivendell it would not be uncommon to stumble across the grand architecture or high quality handicrafts of the Elves, Ihlara has some beautiful works of its own to display, most notably the rock-cut churches and vibrant frescoes that were created by the Christians that came here fleeing persecution by the Romans in the fourth century AD. 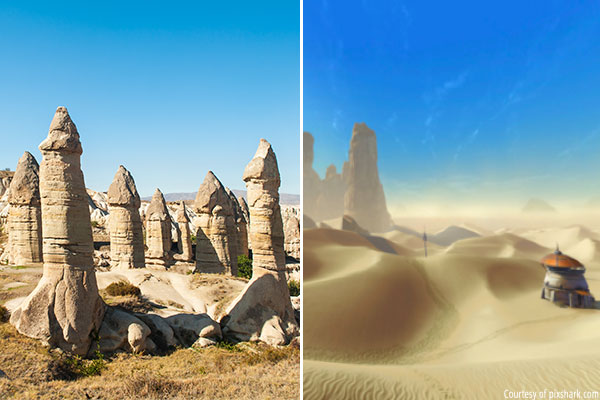 Although Luke Skywalker was born and raised on a planet in a galaxy far, far away, the dramatic landscape and dwarfing rock sculptures of this Star Wars locale seem somehow reminiscent of the “fairy chimneys” for which Cappadocia is famous.

Although Tatooine is deemed a “desolate place” with “nothing to see” by its inhabitants, Goreme, which is one of the central towns of Cappadocia, is actually quite the contrary. Perhaps the most famous of its sights are the “fairy chimneys,” which are rock formations protruding from the ground. Goreme is home to a UNESCO World Heritage Site: an open-air museum displaying some of Turkey’s finest ancient frescoes.

If you are interested in being transported to a real-life fairytale land, Cappadocia is for you! To find out more about Worldwide Quest’s upcoming tour of Turkey, click here.
Webinar Library