The Coordinator for the Maryland Breeding Bird Atlas, Gabriel Foley grew up on a small farm in southeastern Ontario, where his curiosity cultivated an appreciation and wonder for nature. After receiving a diploma in fish and wildlife conservation from Sault College, he headed west to Saskatchewan to pursue undergraduate studies in Biology. Subsequently he completed graduate studies on the Common Nighthawk. He then spent a year studying sparrow-weavers in South Africa. He has conducted wildlife surveys across North America and is an enthusiastic proponent of citizen science projects. Most recently, Gabriel worked as a Stewardship Coordinator for the Nature Conservancy of Canada in Saskatchewan, where he also hosted a nature radio show, The Prairie Naturalist, and volunteered as Saskatchewan's nightjar survey coordinator for WildResearch. Gabriel's current work aims to map out the distribution of birds breeding across Maryland and the District of Columbia. He is an obsessive birder and outdoorsman and is passionate about sharing his love of nature with others! 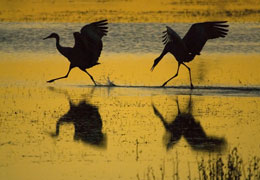 In Search of Whoopers 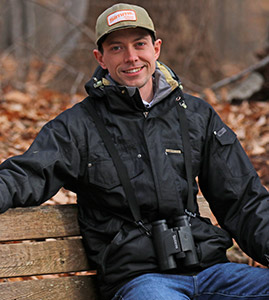 While surveying for the Saskatchewan Breeding Bird Atlas, Gabriel found a pair of Yellow-throated Vireos on a nest. This nest turned out to be only the second record of this bird species nesting in Saskatchewan!