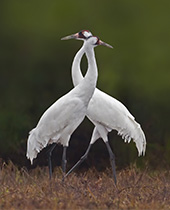 My childhood was spent exploring the forests, lakes, and creeks on the north shore of Lake Ontario. I followed animal tracks in the forest, fished for bass and walleye in the lakes, and caught crayfish and minnows in the creeks. Nature became as engrained in me as the mud and grass stains on my jeans. I didn’t think I’d ever leave the farm. Eventually though, I grew up, went to college to learn more about the natural world, and was soon offered a job with the Nature Conservancy of Canada. It was located in Saskatchewan, a place that, like most folks from Ontario, I thought was simply a giant wheat field. Reluctantly, I accepted the position… 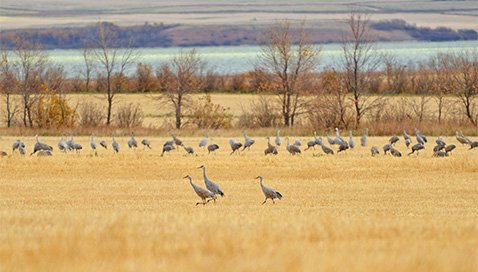 Sandhill Cranes
Ten years later, after half a dozen field jobs, an undergraduate degree, and a graduate degree that took me to South Africa, I am thrilled to still be in Saskatchewan, and confess to a love affair with the Prairies. Travelling along the #1 Highway, I understand how many can think Saskatchewan is flat and boring and uninspiring. But should you join the adventurous few and leave the highway, you’ll encounter a world teeming with wildlife, birds, and a living sky. 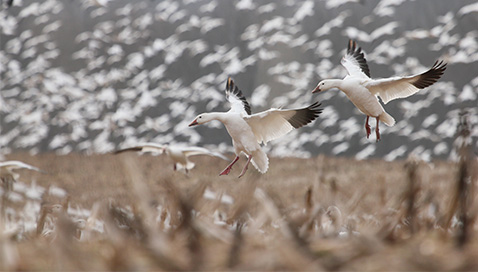 Snow Geese
The autumn is magical. Millions of waterfowl, cranes, and shorebirds funnel through the “prairie pothole” region on their way south. The flocks are unimaginably large. Wave after wave erupts from the ground, until the sky is obscured, and then it is only wings, feathers, and air. It’s a spectacle that leaves an indelible impression upon your mind and soul. And if you are taken to the right place, at the right time, a tall, white figure may emerge through the trumpeting chaos. 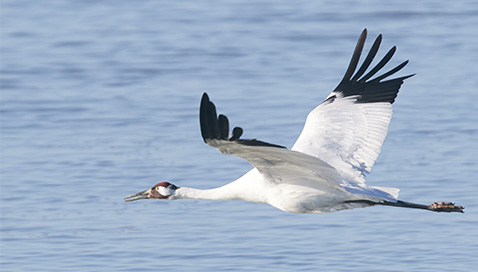 Whooping Crane
One of North America’s rarest and most majestic birds, the Whooping Crane can be found picking its way through a stubble field, ochre-tinted young in tow. Usually we see small bands, but occasionally these birds will form groups in excess of 100 individuals. Saskatchewan may be overlooked by many, but it rewards those who take the time to appreciate its subtle beauty with an endless sky painted in the black-and-white of goose and crane.

I hope you will join me in Saskatchewan!