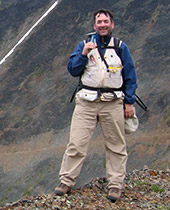 Lee Groat first experienced the Yukon in 1980 as a geology student exploring for lead and zinc. The experience left him eager to see more of the north, and he spent the following summer working as a drill geologist on the Quebec-Labrador border. After a long absence to complete his schooling (at Queen’s, Manitoba, and Cambridge Universities), he returned to the Yukon in 1992 as a faculty member with the University of British Columbia, this time to study granitic pegmatites, which are global sources of rare metals. This project, which to date has entailed an aggregate year of fieldwork in northern Canada, continues to this day and has resulted in a much better understanding of how these unusual rocks form.

Dr. Groat’s research focus changed in 1998 when one of his former students discovered emeralds in the Yukon Territory. Studying that deposit led to the realization that gem deposits are rare because they represent unusual geological conditions, but despite this, very little research had been done on them, something he resolved to change. Professor Groat is now recognized as a world expert in gem deposits.

Professor Groat still spends part of every summer doing fieldwork in the Yukon. He is looking forward to sharing his 40 years of northern experiences with participants in the Yukon Adventure.

Join Lee as he takes the role of Study Leader for the alumni UBC Travel Club on a classic Canadian adventure, exploring Yukon’s gold rush (1896-99) history and what came before, in particular the region’s deep-rooted First Nations cultures, and after.