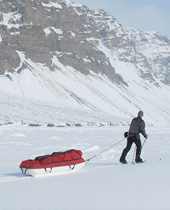 “Arctic Return” is a recently completed (Spring, 2019) Arctic overland journey led by Canadian David Reid to retrace the steps of Scottish physician and explorer John Rae. A key Arctic Return project team member was an Inuit historian Louie Kamookak from Gjoa Haven whose work documenting Inuit oral history which led to the discovery of Franklin’s ship the Erebus and many other historical facts had earned him many awards.

Image courtesy of David Reid.
Of the four travellers in the Arctic Return 2019 expedition team - only two made it to their destination - Point de la Guiche - where Rae discovered the link to a navigable way through the passage. Reid and the 2019 team travelled overland from Naujaaut (Repulse Bay). You can follow the team’s blog and photos, trace their route and learn more about John Rae on the website here.

John Rae made two of the most important Arctic discoveries of his time: In 1854, he discovered the last link to a navigable NW passage in the Arctic - Rae Strait - between the Boothia peninsula and King William Island; and he was the first European to learn and report of the fate of the final and disastrous John Franklin expedition. He identified the first physical remnants of Franklin’s last journey and learned from local Inuit about how Franklin’s ships and men perished on the west coast of King William Island. (Where Franklin’s ships the Terror and Erebus have now been found). Other Franklin searches of the day were looking in completely different areas of the Arctic.

I have just finished reading one of the books on Worldwide Quest’s recommended booklist for our trip. Dead Reckoning: The untold story of the Northwest Passage by Ken McGoogan (2017). Ken was also part of the 2019 Arctic Return project. The achievements of John Rae are featured in Ken’s book. Rae was the most successful Arctic explorer of the day. He worked for the Hudson’s Bay Company and spent almost five years in three expeditions between 1845-1854 charting thousands of kilometers of Arctic coastline by foot and by boat. His discovery of Rae Strait led - 50 years later - to Roald Amundsen being the first to successfully navigate the Northwest Passage by boat. Amundsen used Rae Strait and credited Rae’s discovery for his success. Sadly, Rae’s landmark discoveries were squelched by a campaign of disinformation undertaken by Lady Franklin. She wanted her husband to receive the credit for discovering the NW passage (now proven false) and she wanted to squelch Rae’s reports of his discovery of the Strait but also about cannibalism which the Franklin crew resorted to in their final days (since proven as true). She even hired Charles Dickens to write public tales attempting to discredit Rae’s discoveries and reports.

Rae relied on close working relationships with local Indigenous peoples - in the Hudson Bay area, NW territories and Arctic- Inuit, Dene & Ojibway. He learned how to survive in the Arctic by using their approach to dress, shelter (building igloos), travel, food and hunting. In fact, on his push which discovered Rae Strait he was accompanied by only 2 others - an Inuit man named William Ouligbuck and an Ojibway man named Thomas Mistegan. The most successful Arctic explorers relied on the local peoples for translation, making peace with newly encountered Indigenous groups, way finding and northern survival techniques.

I would highly recommend McGougan’s book. It is a fascinating history of efforts from the 1500’s (starting with Martin Frobisher) to modern times of the key figures who unlocked the geography of the far north for the Western European world. He is a great storyteller and there are lots of maps and photos to illuminate the text.
— Nancy Watters, 2019 Epic Northwest Passage traveller
FULL WEBINAR LIBRARY