Marc Webber is a marine mammal specialist with an undergraduate and graduate degree from San Francisco State University. He has worked as a biologist and refuge manager for non-profit organizations and the US government for his entire career in places all over the country. Among other accomplishments, Marc has: done extensive work with stranded marine mammals; conducted marine mammal and seabird studies by ship and aircraft for NMFS and the United States Fish and Wildlife Service in the North and South Pacific, North Atlantic, and Arctic; studied Monk Seals in the northwestern Hawaiian Islands, Northern Fur Seals at San Miguel and the Pribilof Islands, Walrus in the Bering and Chukchi Seas, Harp Seals in Russia, and Dusky Dolphins in New Zealand. He has also been a general field technician at McMurdo Sound Station in Antarctica, assisting on a variety of projects for two field seasons in the early 1980s.

He has done extensive work with stranded marine mammals, co-authored many journal articles and book chapters, and conducted marine mammal and seabird ship and aircraft surveys over most oceans of the world. Among his better-known works is a major book he co-published a fantastic work called Marine Mammals of the World: A Comprehensive Guide to Their Identification. It is now in its second edition!

Marc has been a lecturer and marine mammal specialist on many expeditions to the Antarctic, Sub-Antarctic, and South America. Marc was a naturalist aboard our inaugural Baja California & the Sea of Cortez expedition cruise in 2019. Marc currently resides in Alaska but will be excited to return to Baja California and provide our Quest travellers with another wonderful experience in 2021!
Contact us to be the first to know when this leader is travelling next! 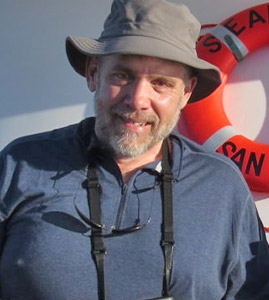