The Familiar and Unfamiliar in the Heart of Europe 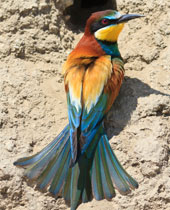 It would be easy to accuse me of bias in extolling the virtues of Central Europe as a nature travel destination. Indeed, my paternal lineage is deeply rooted in this land, and my first visit at age 7 with my dad – to a then-communist and totalitarian Czechoslovakia as well as the neighbouring (and free) Austria – left a strong impression on me. Back then, there was an obvious psychological contrast between those two countries but a couple of things were constant: the density of well-preserved centuries-old buildings, which evoked medieval and Renaissance-era intrigues known to me theretofore only though tales, movies and cartoons; and the rolling, pastoral landscapes that were strangely exotic and striking for me as a child with a keen interest in nature. Both elements combined to convey the feeling of being in a time warp, arguably a great place to be when one is on vacation! I’ve had the opportunity to return several more times since the fall of the Iron Curtain and dissolution of Czechoslovakia and the elements that appealed to me back then still hold great appeal, even more so in fact.

This is a place that combines the familiar with the unfamiliar – familiar in the climate and the way things work generally speaking but with a pronounced historic backdrop, and flora and fauna bespeaking centuries of coexistence alongside civilization. It is where every taste of wilderness and unaltered nature could be considered a valuable commodity.

Our tour to the region next May will be a fantastic opportunity to be immersed in these experiences, with great birding and wildflower viewing opportunities and much more. What are some of the things we should look forward to next May on the tour?

1) Vienna: The monumental nature of the historic buildings and the seamless addition of modern buildings to the old city core maintain a striking skyline, surprisingly similar to what can be seen in medieval engravings of the city! Vienna successfully conveys its fundamental historical importance and the erstwhile grandeur of the noble Hapsburgs who ruled the Austro-Hungarian Empire from here. If you really like coffee, you will also be delighted to find that the Viennese make a fine brew!

2) European Bee-eater Colony: this may be the most beautiful bird in Europe, and we won’t get just a fleeting glance. Our visit to a breeding colony in Hungary should allow us great views and photographs of these aerial insectivores as they enter and exit their nesting cavities, which are excavated in an earthen bank.

3) Orchids in bloom: We’ll visit preserves where many now-rare orchids have been carefully protected. We should find some fine examples in bloom at this time of year. These should make for some nice photos too!

4) “Comparative birding”: All around we’ll see birds that remind us very much of those in North America. We’ll see the Blackbird assuming the place of our own American Robin, the delightful Blue Tit and Great Tit akin to our chickadees …and with some effort, the formidable Black Woodpecker, cousin to our Pileated Woodpecker. A similar situation will apply to the trees!

5) Small villages: The landscape is dotted with many quaint villages that preserve the look and feel that they had hundreds of years ago. A couple of the ones we will visit are designated UNESCO World Heritage Sites owing to the remarkably high degree and quality of preservation.

6) Tasty food: I was raised on this food and can attest that we’ll enjoy hearty and savory meals! Breads at breakfast are excellent with particularly good rye breads available. We’ll try some nice local wines too.

7) The Great Bustard’s “foam bath”: We may see the displaying males of these 3-foot tall birds as they puff up and their heads appear to be emerging from a “froth” of feathers! The location will be in their breeding grounds on the steppes of eastern Austria. This very birdy location is host to one of just a few relic Great Bustard populations in this region and is important for this vulnerable species on a global scale.

8) Prague: It is every bit as beautiful as you may have heard. It’s replete with Medieval, Renaissance, Baroque and 19th Century buildings, having been largely spared the intense bombing that shook many other large cities of region during World War II. The photo opportunities are endless and we’ll surely have some interesting birds as well.

These are just a few of the things I’m looking forward to but there will be many more things to enjoy. Spring should provide a fine ambiance as birds will be in song and the weather generally balmy and pleasant and, importantly, will be outside of the busy summer tourist season.

I invite you to join me next May on a journey of discovery as we transit from Vienna, through the wonderful countryside with meadows, villages, copses and vineyards and with a fitting ending in Prague. > Click here to learn more about the trip and request a detailed itinerary.
FULL WEBINAR LIBRARY