Jaguars Are Invisible, or So I Thought! 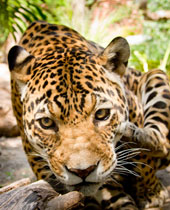 Never in my wildest dreams, or in my 30 years as a wildlife biologist, or even in my years of traveling in South America, did I think I would see a real, live, wild Jaguar.  Jaguars are elusive nocturnal hunters, shy and wary.  They are seen by very few people as they hunt for agoutis, hares and peccaries.  Furthermore, when our Brazilian guide told us we had a chance to see them when we sailed on the Cuiabá River in the Pantanal, on day 8 of our Quest Nature Tours trip to Brazil, I was skeptical. However, he is highly experienced and he had been right in everything else he promised us up to that point in the trip.  Could he be wrong this time?

We set off on the river about 8:00 am; the day was typical for southern Brazil: clear, sunny, hot and beautiful. The Cuiabá River is muddy brown as it carries its load of silt towards the ocean and provides a source of great life along its banks. After about two hours enjoying the river ride, our guide said very calmly, "There is a Jaguar on your left, coming to the river to drink." With as much calmness as I could muster, I aimed the camera towards the shore and started to click away. I knew my wildlife colleagues would not believe that we saw a real Jaguar, living wild and free.

We watched him move a little to the right, and then he drank. He was noisy like a cat and lapped water for several minutes.
One Jaguar was not enough and we continued to motor along the river quietly as we searched for more.
Our next sighting was this female:

She was just resting along the river bank, perhaps already having had a drink, perhaps just taking it easy during the heat of the day.
As we watched her, we were surprised to see the male that we had seen earlier approach her. The male’s intentions were clear. He was looking to mate. As in all of nature, it takes two to complete the biological imperative, but this female was in no mood to breed. She let him know with her very clear verbal signals and growls.

In this picture you can just see the male’s nose near the center bottom. He took his rejection with good grace and went a few metres away and adopted an attitude of expectation.

Perhaps his time would come at another place and on another day.

For a wildlife biologist like me and the other Quest travellers, this was a thrilling sight and one that will stay with us for a long time.

You have the opportunity to visit Brazil with us!