Those Petals Aren’t Just For Looks: How to Thrive in a Cold Desert 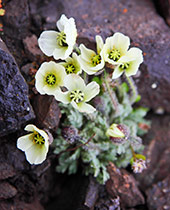 What are the problems a plant in a cold, high altitude desert faces to surviving? Some challenges we thought of were: a compressed growing season, with long days but relatively weak sunlight; the general lack of moisture; and the cold! Luckily for it, the Arctic Poppy (Papaver radicatum) seems to have all things covered – in fact, so well, that it is among the hardiest vascular plants in Canada, occurring far into our High Arctic. 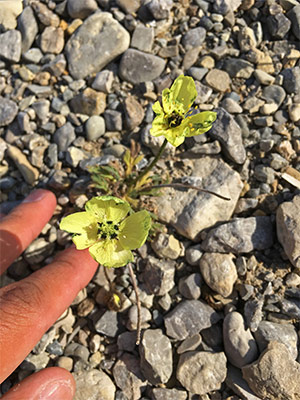 Arctic Poppy in Resolute on Cornwallis Island in the Canadian High Arctic.
This was the first plant I saw upon exiting the airport there in August 2017!
What might be some adaptations a plant would need to survive a cold, high altitude desert?

A big part of the poppy’s success are its petals. Whereas we understand that petals serve as visual cues to attract pollinators, those of the Arctic Poppy appear to serve a couple of other important functions. First, they capture the warmth of the sun. Together, the bowl-like shape ofthe petals creates a micro-environment around the green ovary (where the seeds will develop) at the flower’s centre. They absorb heat and reflect it onto the ovary, while shielding it from the full impact of the ambient air. The warmth within also encourages pollinators to linger and potentially increasing the chance of fertilization. Adding to this, the flowers also track the sun. This might not sound remarkable as various flowers (most famously, sunflowers) do this. But it’s how the Arctic Poppy does it that’s fascinating, because it’s the petals themselves that allow the entire flowerhead to move. Experiments have shown that flowerheads whose petals were removed no longer tracked the sun! So the petals are required to track the sun and create the ensuing “hothouse effect” within the bowl they form. The heat retention leads to more successful seed production (more seed, and heavier seed). In this tap-rooted plant that does not reproduce by suckers or offsets, setting seed successfully is vitally important. 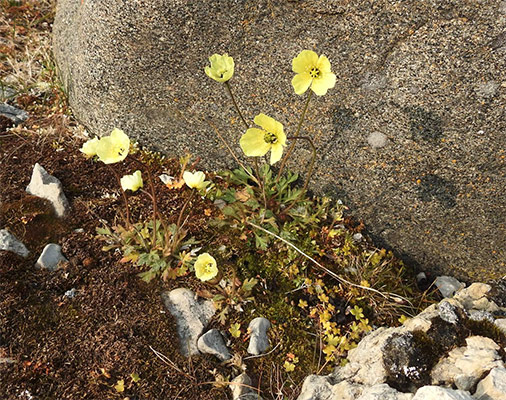 These Arctic Poppies on Nunavut’s Somerset Island are conspicuously
tracking the sun – note their shadows on the rock behind.
© Pete Read
Also interesting is the apparent geographic variation in the petal colours. Typically depicted as yellow, the Arctic Poppy also occurs with white petals. The plants with white flowers are more frequent in areas with cloudier or foggier weather. It is reasoned that the yellow-flowered plants are more efficient at absorbing the sun’s heat. Less direct sunshine confers less benefit to the plants with yellow flowers. In addition, making pigments requires valuable energy, and plants receiving less sunshine can’t afford to make the yellow pigment. Having no pigment in their petals, plants with white flowers can direct energy more efficiently to other aspects of their growth!

The Arctic Poppy and its close relatives (plus a myriad other interesting plants) can be seen on one of our Arctic land tours or expedition cruises here.
Webinar Library