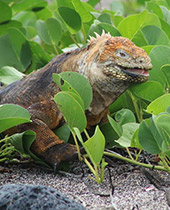 Several million years. Add a dash of colonization and a large helping of isolation. A sprinkling of variation. That is the recipe for biological evolution.

Perhaps no archipelago epitomizes ‘evolution gone wild’ and captures our imagination quite like the Galápagos Islands.

On his voyage around the world on the HMS Beagle, Charles Darwin only spent five weeks in the Galapagos; however, we know how influential that short visit would be. Alongside my fellow Quest travellers this past February, we had about one week. Would we find ourselves awe-inspired (on a pro-rated basis?), have our curiosity piqued, and develop revolutionary insights that would change our understanding of life as we know it? Well, to be fair, time will tell. After all, it took Darwin 20 years to write-up his revolutionary ideas on evolutionary biology! In the meantime, I am sharing a selection of wonderful immediate takeaways and experiences from our trip of a lifetime to Darwin’s “Enchanted Isles”.

We hit the ground running with our first stop in the highlands of Santa Cruz to observe one of the most famous residents lumbering about. Contrary to popular belief, it was the islands’ tortoises [and mockingbirds] - not the finches that are today named in his honour - that attuned Darwin to the evolutionary tinkering of nature.

We knew that we were on the right track!

Found it! One of the several Galápagos Giant Tortoise species, the Western Santa Cruz Tortoise resides in the highlands of Santa Cruz.
The Galápagos Islands, as is true of many of the world’s remote archipelagos of volcanic origin, boast a remarkable and eclectic community of flora and fauna. Each species has a story to tell and that speaks to their evolutionary history: birds that cannot fly, lizards that feed underwater, and tree-like cacti.

Flightless Cormorant spreads its undersized wings to dry in the equatorial sunshine.

A Marine Iguana, the only lizard in the world that feeds at sea.

Giant Prickly Pear cacti command attention as they tower above the lava rock.
What oceanic islands lack in diversity, they often make up for in novelty. It is no surprise then that many species in the Galapagos archipelago, even on specific islands, are endemic: found nowhere else in the world.

A Galapagos Hawk looking for a meal. We wonder what’s on the menu?

Wake-up call! A dawn visit to North Seymour Island meant that we joined the seabirds and this semi-snoozing Land Iguana at first light.

Our multiple interactions with Galapagos Flycatchers proved rewarding as these birds stopped to look at us as we gawked at them!
In our travels on and between islands in the western half of the archipelago we enjoyed the everyday activities of wildlife. From the boisterous play of sea lion pups in nursery pools, to the salty nasal spray of Marine Iguanas, to ecological lessons of ‘nature red in tooth and claw’:

We got our answer to a question asked above! Predator-prey interactions, such as this Galapagos Hawk making a meal of a Marine Iguana, intimately shape island ecosystems.
Swept by both warm and cold ocean currents, the islands demonstrate an astounding richness of marine life. This also leads to a most curious juxtaposition of fauna and flora. Take, for example, a resident seemingly more polar sharing space with a tropical lizard:

The Marine Iguana and Galapagos Penguin are strange bedfellows of the island archipelago.
Daily views of marine turtles delighted, flocks of fishing seabirds mesmerized, and the courtship antics of Blue-footed Boobies entertained.

A serene scene as a Galapagos Green Sea Turtle grazes on algae.

All puffed up and ready to show: A male Great Frigatebird making his worth
known to females.

Tender moments as a Galapagos Sea Lion calf nurses from mum.
For those that ventured below the waves we were treated to wonderful spectacles of colour and activity. Urchins, vibrant sea stars, bountiful fishes, and close encounters with sea lions, oh my!

The Flag Cabrilla above was a common sight among the rocky nooks and crannies.
Sea lions are wildly inquisitive with visitors to their underwater world!
With so many phenomenal wildlife sightings (a fraction of which have been shared here! Never mind the landscapes …) it is challenging to pinpoint a signature moment of the trip. That said, I think there is one very special moment that all participants can agree on: Shortly after crossing the Equator and while rounding the north shore of Isabela Island our group was treated to an acrobatic spectacle, first on the horizon then, quite literally, right under our noses. Quick, look over there!

The Galapagos Islands are a living laboratory in which we have the opportunity to watch ecology and evolution play out in front of us. I can think of no better place to indulge your curiosity for the natural world.

See you next time in Darwin’s Enchanted Isles!

P.S. This was my first tour as a Quest leader. I am deeply humbled by and appreciative of each and every one one of my tour group members, our exceptionally knowledgeable local guide in the Galapagos - David - and everyone at the Quest office who made this trip such a success!