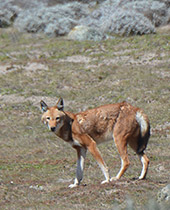 Our early morning game drive in Ethiopia's Bale Mountains had already been a success. We had watched Golden Eagles soar overhead, Blick’s Grass Rats scurrying for cover, Red-billed Choughs probing the earth for invertebrates and even a distant Giant Mole-Rat. But there was one species we hadn’t seen yet and it was the number one wish for most people on the trip. Then Sisay, our Ethiopian guide extraordinaire, yelled, “Stop, stop, stop!” to our patient and accommodating bus driver. Sisay pointed and my heart jumped. There it was!

“Does everyone see it?” I asked. A mixture of yeses and noes filled the air. I heard one of my participants say to others at their end of the bus, “It’s right there.” These words make every nature tour leader cringe. If someone can’t see something, this phrase will likely not be much use. I was about to help those that still couldn’t see our quarry when Sisay said, “Out of the bus!” So, we all filed dutifully off the bus, making it easier to show the animal to everyone. Soon all but one could see it. I stood directly behind him and pointed over his shoulder.

“Do you see that orange lichen-covered rock?”
“Yes.”

And now everyone could see it: an Ethiopian Wolf! I was worried that our presence out of the vehicle would scare it, but Sisay already knew it wouldn’t. Lying on the ground not far away, completely ignoring us, was the rarest member of the dog family in the world. And what a beauty! About the size of a coyote but with rich orange upperparts and clean white underparts, its bushy but short tail was darker than the rest of its body and its long, pointed muzzle gave it a foxy appearance. It was lying in the short vegetation and barely gave us a glance. 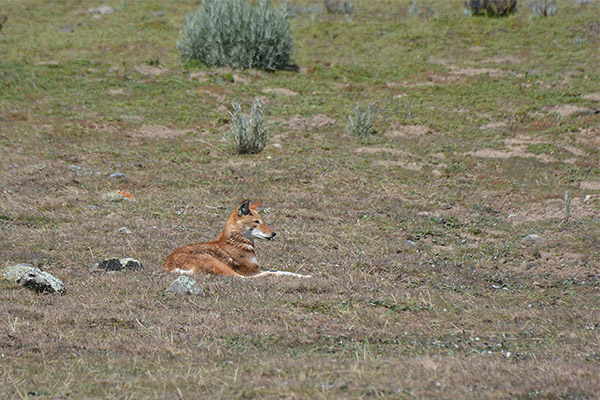 With only an estimated 400-500 animals in the wild, Ethiopia’s signature canine is also the rarest African carnivore overall and is restricted to the country’s highland areas. Here it is threatened by increased grazing pressures of local livestock herds and rabies from local dogs. Fortunately, the Ethiopian government grants the wolves full protection and has implemented a rabies vaccination program to help battle the disease. 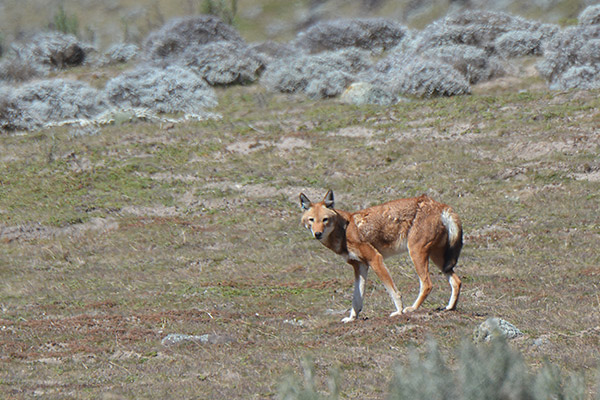 Ethiopian Wolves are social like the well-known Gray Wolf, so why was “our” individual on its own? It likely has to do with the wolf’s hunting technique: these animals are primarily rodent-catchers. Because rodent hunting tends to be an individual affair, Ethiopian Wolves usually hunt alone and meet up with other pack members in the evening and the middle of the day. The wolf we were watching stayed lying down for a while and then eventually stood up and strolled off to presumably find a rat-rich plot of land for some rodent snacks. The whole experience left us all in awe as we filed back onto our bus and continued with our exploration of this amazing country.

We’ll be returning to Ethiopia to discover
its wildlife and wild places in October 2021.