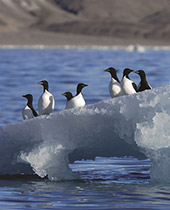 These four birds are the essence of the High Arctic for me. Taking a cruise is a great way to explore remote locations and watch them on the tundra, at sea, and on precipitous cliffs.

Rock Ptarmigan
The Rock Ptarmigan is the Territorial Bird of Nunavut. It is the only bird that spends its whole life on the tundra. A land bird and member of the grouse family, sometimes called snow chicken, it is adapted to severe arctic winters, burrowing in snowdrifts out of the wind. Unlike the bare legs of most birds, feathering all way to its toes acts as insulation and gives it wide snowshoe-like feet for walking on snow.

Master of camouflage, the Rock Ptarmigan seasonally changes its plumage. In winter it has a white plumage, whereas in summer the female’s dappled brown feathers blend so well with her surroundings that Arctic Foxes have been known to walk by and not see her. The cryptic Rock Ptarmigan will be a lucky and exciting find.

Thick-billed Murre
The Thick-billed Murre belongs to a family of small seabirds called alcids, which all sport variations on a dapper black and white plumage. Despite a resemblance to penguins, they aren’t related, and penguins don’t occur in the Arctic. Thick-billed Murres are the most numerous seabird in Nunavut, where they nest in immense colonies of over a hundred thousand birds on narrow ledges of vertical cliffs. Breeding pairs with one young are so tightly packed together, they often touch each other. A memorable sight in late August is seeing half-grown chicks jump from great heights to join the male on the sea below. From there the male parent will care for the young as they undertake a southeastward swimming migration to their wintering areas several thousand kilometres away off Newfoundland.

Northern Fulmar
The Northern Fulmar looks like a gull, but when flying alongside our ship, we notice that, unlike gulls, it has a tube on its bill. This places it in the group of seabirds called “tubenoses”. Fulmars are marvellous fliers, following ships far from land, preferring deep seas over shallow waters. Agile in flight, they alternate stiff-winged flaps and graceful glides, skimming with wingtips just above the waves.

Having a strong sense of smell enables Northern Fulmars to find fish and other food, and as such they are notorious scavengers around fishing boats. An earlier name Oil-bird appropriately describes how its stomach produces a foul-smelling oil, rich in nutrients, which is regurgitated and fed to growing chicks. A fulmar also sprays this oil over an intruder coming too close to its nest. Even a Gyrfalcon can be deterred by a direct hit of oil, which ruins its feathers and prevents it from flying.

Ivory Gull
The Ivory Gull is a High Arctic specialist. Its genus name Pagophila –meaning sea ice lover– is well earned because it spends much time in ice-covered habitats and often nests on lofty cliffs beside glaciers. Strikingly beautiful, the Ivory Gull is the only adult gull in the world with a pure white plumage. Big dark eyes and a multicoloured bill impart a gentle aspect. In contrast to this delicate appearance, the Ivory Gull is a skilful scavenger and carnivore, seeking out Polar Bear kills and following Inuit hunters. At whale and seal carcasses, it’s aggressive and voracious. Having a strong and agile flight allows it to forage in the pack ice for small marine organisms.
Jean Iron is Ontario’s best-known birdwatcher, was President of the Ontario Field Ornithologists for nine years and edited its newsletter for 14 years. She is an active member of the Brodie Club, one of Ontario’s oldest and most prestigious natural history clubs. Jean’s strong interest in conservation led her to serve as a board member on Ontario Breeding Bird Atlas Management Committee and as a board member and coauthor of the Ontario Shorebird Conservation Plan. She has been a resident bird expert upon multiple previous expeditions in the Arctic.
Webinar Library