By: Emily Harnett of The Atlantic 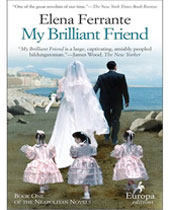 Click here to view Classical Pursuits' literary adventure through Elena's world: Naples and Ischia.
Readers complain about the imagery that adorns the author's highbrow novels. But there's value in embracing the oft-scorned "women's fiction" genre.With their sandy beaches and windswept women, the U.S. editions of Elena Ferrante’s novels look familiar even if you’ve never seen them. That’s because they look like virtually every other book authored by a woman these days—not to mention like bridal magazines, beach-resort brochures, and even “Viagra ads.” On Twitter and beyond, readers have described Ferrante’s covers as “horrible,” “atrocious,” “utterly hideous,” and as a “disservice” to her novels. At Slate, one commenter approvingly mentions a local bookstore’s decision to display one of Ferrante’s books in plain brown paper, reviving a practice used for Playboy and the infamous issue of Vanity Fair with a pregnant Demi Moore on the cover. The implication, of course, isn’t that Ferrante’s covers are obscene in the traditional sense—just obscenely bad.
The Neapolitan novels, as the Italian author’s beloved tetralogy is called, chronicle the friendship between two ambitious young women over the course of 50 years and some 1500 pages. Since the publisher Europa released the first book, My Brilliant Friend, in 2012, the series has sold over a million copies in the U.S. and garnered glowing critical praise. Her covers, by contrast, have earned comparisons to “$4 romance book[s] found in an American gas station. ” The complaints are so numerous that Ferrante’s publisher even expressed concern to Slate that “many people didn’t understand the game we we’re playing, that of, let’s say, dressing an extremely refined story with a touch of vulgarity.” Certainly, readers aren’t required to enjoy the cloying sensibility of the images just because they’re intentionally bad, and because Ferrante herself chose them. But to despise the covers—and, by extension, the kind of novel they evoke—in the name of good literature is to buy into the destructive stigma that has long been attached to “women’s fiction” as a genre.

It’s true that Ferrante’s U.S. paperbacks look a lot like “chick-lit,” the favored slight for disparaging commercial, female-authored fiction. It’s also true that “chick-lit” that has cast a long, pastel shadow over Ferrante and her readers. Her covers are reminiscent of books by Jennifer Weiner, the reigning queen of pop romance who last year clashed with Jonathan Franzen over the fact that genre fiction by men has long been deemed more worthy critical attention than genre fiction by women. Weiner’s covers, like Ferrante’s, have a high frequency of ocean horizons and women with their backs turned. Their visual formula isn’t exactly “hideous,” as some readers claim, but it’s certainly tired, and not a little silly: Looking at a Ferrante or Weiner cover, it’s easy to conclude that no woman in their fiction has ever lived inland, or so much as looked directly at a camera.

Weiner has more in common with Ferrante than covers alone, and there’s a whiff of hypochondria to the reader backlash—a fear that Ferrante’s high-minded fiction might be contaminated by mere resemblance to more commercial fare. That anxiety forgets just how commercial Ferrante really is, right down to her soapy, page-turning plots and seven-figure book sales. But if there’s a prim contempt in a lot of Ferrante cover-bashing, there’s also justified suspicion of the long history of sexist publishing practice, in which any book by a woman is automatically marketed as “women’s fiction.”

For The Guardian in 2008, Diane Shipley interviewed a number of female authors on the subject of the “chick-lit cover up,” or the imposition of that style of covers on “any book written by a woman, whether it fits the genre definition or not.” Shipley describes one woman, Sue Hepsworth, as the author of a novel that “poignantly explores the pain of losing a parent;” its cover, according to Shipley, “makes it look like it’s about garden parties and designer clothes.” She also invokes novels by Fay Weldon and Rosy Thornton that similarly demonstrate the “blight” of “misleading” covers on literary books. “If you’re a woman releasing a book,” she writes, “then, you should apparently expect pale colors, swirly writing, and an insipid tag line—whether your story is a moving story about grief, a blog-turned-bestseller about life in Paris, or a potential chick lit-classic.”

Authors are right to be irritated: No writer should have so little say in how their books circulate in the world. But a resentment of unsophisticated covers is usually, in part, an anxiety about unsophisticated readers. Weldon and others are concerned that publishers are underselling the ambition of their novels by selling them primarily to women, forcing them out of running for highbrow prestige. Indeed, when commenters describe Ferrante’s covers as a “disservice,” they imply that, disfigured by bad covers, her books will be lost in the ranks of “beach-reads,” where readers of literary fiction won’t ever find them. And indeed, many of them won’t.

Male readers generally aren’t enticed by chick-lit covers, and many female readers are also turned off by them, with good reason. Like any form of advertising, book covers tell women what they want by surmising who they want to be. And according to the typical chick-lit cover, as seen accompanying novels by Sophie Kinsella and Gemma Burgess, that’s skinny white women living droll, hot-pink lives and buying shoes. To purchase a book marketed this way can feel like bankrolling your own belittlement—which many consumers of culture do cheerfully enough whenever we watch TV or turn on the radio. But for many readers, novels promise an alternative to the shallowness and boilerplate misogyny of popular media. If we go to novels for complexity and depth, then a cover that looks hastily assembled in a Forever 21 accessories aisle can void at the outset the very promise of reading fiction.

But while Ferrante’s covers are definitely trite, there’s little about them that’s actually patronizing. There are no flowers or martini glasses or shopping bags on Ferrante’s covers, no high-heeled condescension. There are just images of women doing things that women, in fact, occasionally do: standing still, holding children, being on the beach. And yet, the very image of women doing things now strikes even women readers as unliterary.

That’s a sad reaction, given that many literary pursuits are predominantly performed by women, despite institutional gender bias in the publishing industry. In total, American women buy more books than men and read more fiction, including literary works. In the U.S., they hold the majority of graduate and undergraduate degrees in literature. By these metrics, the image of a woman should seem literary by default—and courtesy of the chick-lit treatment, more and more women are appearing on the covers of literary fiction. Alice Munro, who won the Nobel prize in 2013, has a number of paperbacks fronted by wistful-looking women. As does Mary Gaitskill, whose celebrated novel The Mare looks like virtually every other book about a girl and a horse. The novels by Leslie Jamison and Roxane Gay, two of the most adored contemporary essayists, have covers that prominently feature women. And yet, readers like Claire Fallon still question why female writers “trade in highly gendered marketing” and novelists like Katy Brand feel defeated when their books are “automatically […] marketed as books for girls.” Literary women seem to believe the best way to give good books their due is to scrub all feminine images from their covers. While the designer of Ferrante’s Australian editions mocks the women’s-fiction conventionality of the U.S. covers, his own design is no less woman-centric—and no less market-driven—for being moodier and grayscale.
The outcry about covers like Ferrante’s seems built on the egalitarian hope that abolishing gendered book marketing will do away with gendered genres. While terms like “chick lit” and “women’s fiction” remain indelible, “lad’s lit” has never taken off, even though there are more than enough books by and about men to justify a snotty sobriquet. Fiction about women, however, is too often characterized as niche-fiction—as too narrow to appeal to anyone but women, or speak universally about lived experience and culture. As Rebecca Solnit wrote last year at Lithub, “a book without women is often said to be about humanity, but a book with women in the foreground is a woman’s book.”