On The Trail of Darwin's Finches 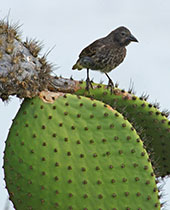 Most everyone has heard of the Darwin’s Finches – that group of birds in the Galapagos thought to have evolved from a common ancestor that landed in the archipelago a long time ago. As the story goes, different lineages of finches arose on the islands through natural selection, leading to the evolution of several distinct species with bills of different shapes and sizes.
Though the idea that evolution could happen has now become commonplace, these finches would earn a special spot in our understanding of evolutionary biology as scientists would demonstrate that evolution had not somehow ended in our modern times; it was ongoing, and change in the bill shapes and sizes of these finches could happen on the scale of just a couple of years in response to extreme environmental factors such as drought, and ensuing competition among the finch species themselves. This story was told well in the classic book The Beak of The Finch and in subsequent findings; for example, in response to intense drought and competition with the Large Ground Finch (#1 below), the average bill size of the Medium Ground Finch (#2 below) decreased. 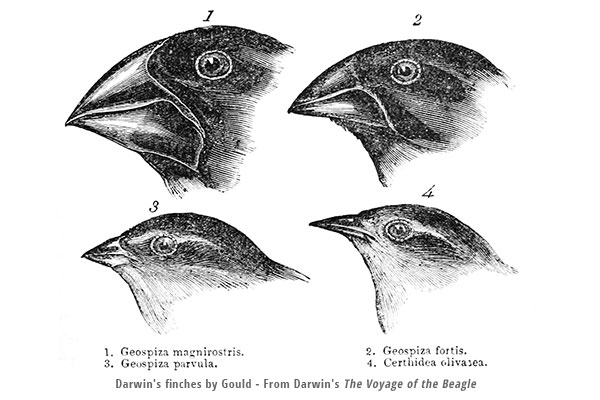 This is how it might happen in simple form:

1) As plants failed to produce a substantial seed crop during drought, the ‘bank’ of average-sized seeds most accessible to the different finches across the board became exhausted.

3) Medium Ground Finches with smaller bills were more likely to survive the drought than large-billed individuals, thereby passing on their genes in greater proportion and thus changing the genetic composition of the population as a whole, lowering the average bill size for the species in the next generation.

While we can’t observe evolution this quickly on our Galapagos expedition cruises, it is still fascinating to observe the finches as we go from one island to the next. They become all the more interesting as we notice that not only do they have different bills, but some species are found exclusively on one or just a couple of islands, and often enough, two different species are never found in the same habitat or even on the same island! Furthermore, the bill shape and size of one species can be different on two different islands, depending on the bill size of its nearest competitor also present there. Despite their differences, distinguishing these species in the field is challenging and should be approached with caution. Nonetheless, many individuals can be confidently identified. Here are a few of the Darwin’s Finches we typically observe. See what differences you notice in this selection of 8 species: 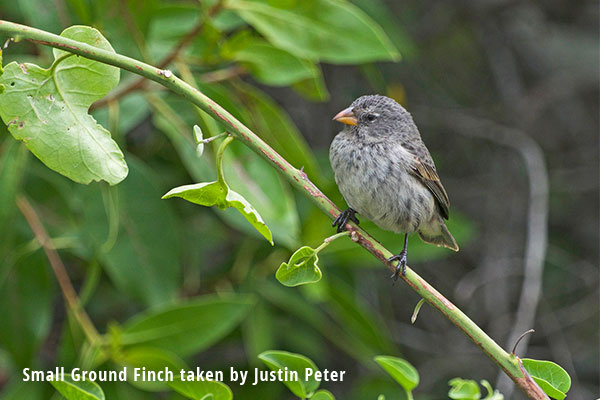 1) Small Ground Finch. This cosmopolitan species is found on almost all of the islands and in various habitats, particularly more open areas. The bill is small and conical and tends to be stubby. 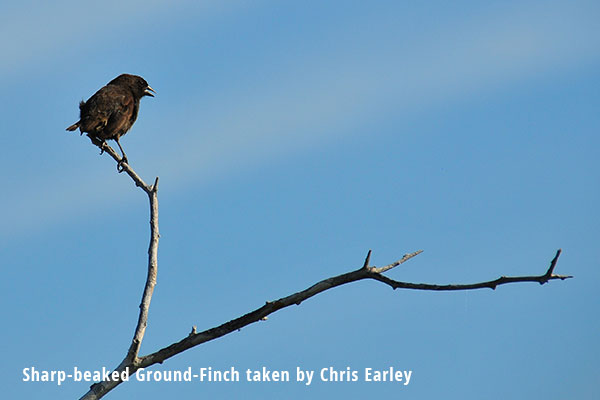 2) Sharp-beaked Ground Finch. It is found on a small number of islands. When found on the same island as the Small Ground Finch, it is only in the humid highlands. The bill is small and conical but tends to be long. In the absence of the endemic Galapagos Carpenter Bee, its bill is even longer, allowing it to effectively extract nectar from flowers! 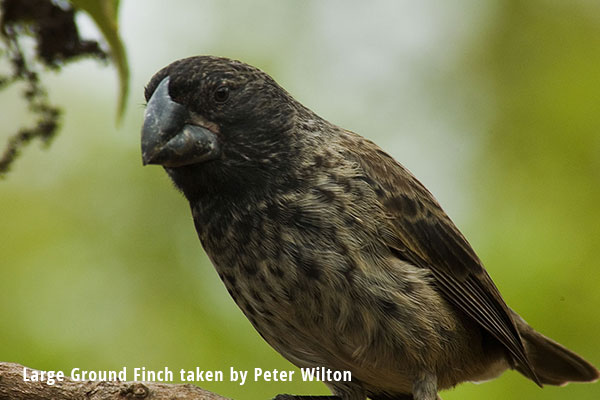 3) Large Ground Finch. Found on a large number of islands in lower elevation habitats where large seeds abound. It has a simply massive bill! 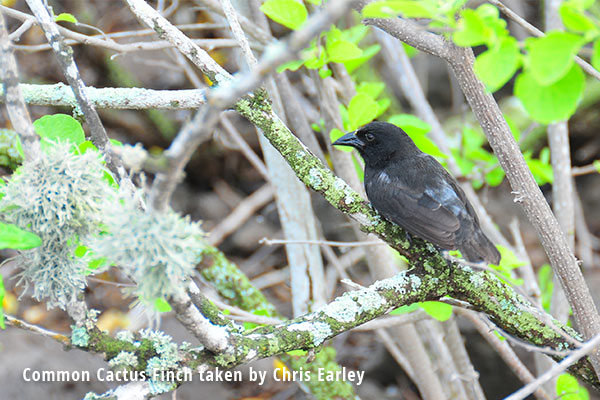 4) Common Cactus Finch. Strongly associated with Giant Prickly Pear (Opuntia) cacti on whose parts it feeds. The bill is long with pronounced curvature. 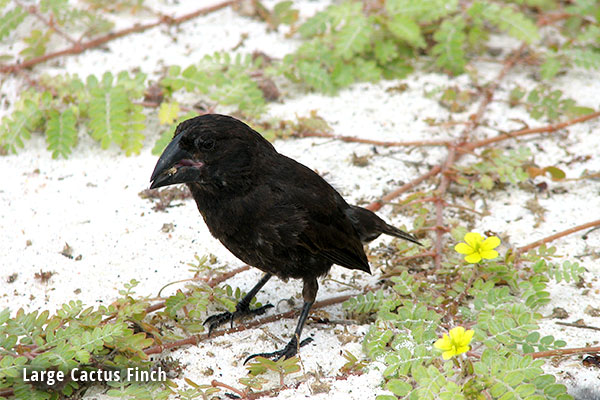 5) Large Cactus Finch. Found only on a couple of islands and associated with Giant Prickly Pear cacti but NEVER found on the same island as the Common Cactus Finch! The bill is large but is longer that tall. Where the Large Ground Finch is absent, the Large Cactus Finch’s bill is more massive. 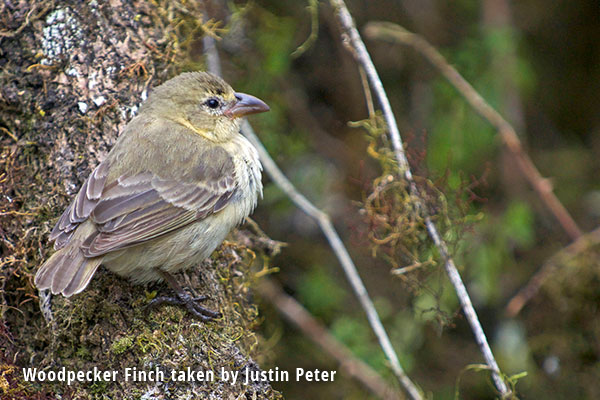 6) Woodpecker Finch. Found in more humid areas of many islands. It uses its bill to hammer into rotten wood for food, and also uses cactus spines or other tools to extract insects! 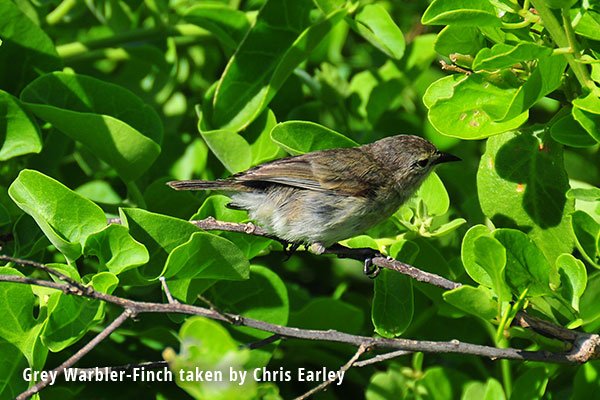 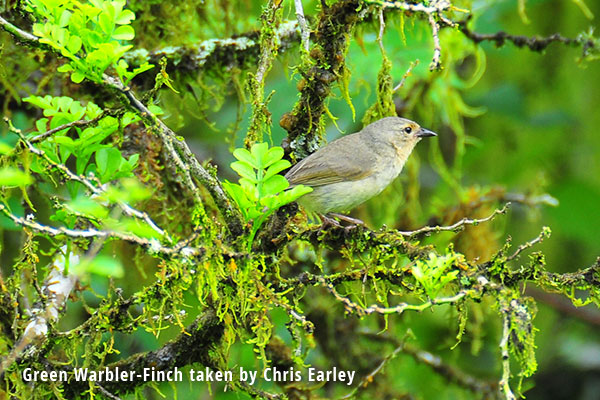 8) Green Warbler-Finch. Found typically on large islands and at higher elevations, and never on the same island as the Grey Warbler-Finch! Said to be more greenish in appearance, but in practice this can be difficult to discern.

Though the Darwin’s Finches arguably lack conventional beauty and there is much else of interest to see while in the Galapagos, we’d like to think they that add their own intrinsic interest. If you’d welcome the opportunity to see these unassuming birds in action and challenge your own observational skills, and see much, much more, do consider our Galapagos departures in 2021.
Webinar Library