Looking Back on Evolution Gone Wild in Madagascar 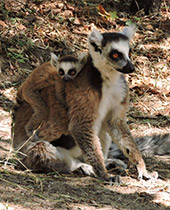 Leaping lemurs, colourful chameleons, amazing avifauna, breathtaking baobobs. Really, need I say more? But Madagascar was more than any one group of wildlife species. We saw local people going about their daily routines as they shopped in markets and travelled the busy streets. Whether it was in the cities or the countryside, we waved and got return waves from all, especially the kids.

Whether we travelled to the rainforests of the east, the mountains of the north, or the dry southwest, the scenery was inspiring. I found the rock formations in Isalo National Park and the ‘tsingy’ formations in Ankarana National Park the most enthralling, geologically speaking. But the wooded areas were also exceptional places - the rainforests of the east and north and the spiny forest in the southwest.

We enjoyed seeing a vast array of lemur species as we visited many locations and habitats. Our expert local guides were able to find species such as the fluffy Black-and-white Ruffed Lemur, comical Ring-tailed Lemur, shy Northern Sportive Lemur, a few diminutive mouse lemurs, and the ultimate favourite, the endearing Indri. Standing in a beautiful rainforest watching and listening to the haunting sounds of this large primate is an experience unlike many others. 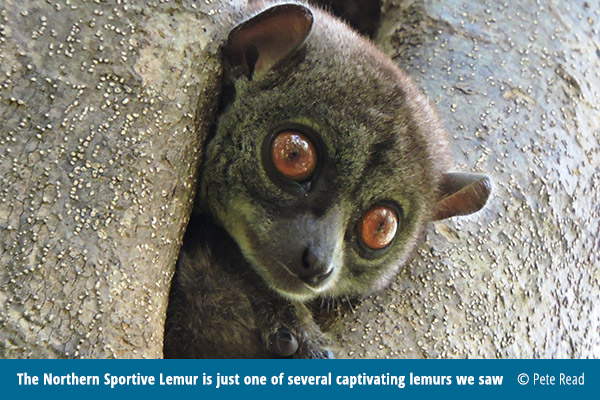 One of our most interesting challenges in the Périnet area was to trying to find the Leaf-tailed Geckos, so well camouflaged against the tree trunks as they appeared to be part of the substrate! A favourite highlight to the northern portion of our trip was the Pygmy Stump-tailed Chameleon, one of the smallest known reptiles in the world. However, the slow deliberate movements of the larger, more colourful chameleons captivated us too. It was akin to watching a movie in slow motion, even as their eyes worked independently to return the stares of our group. 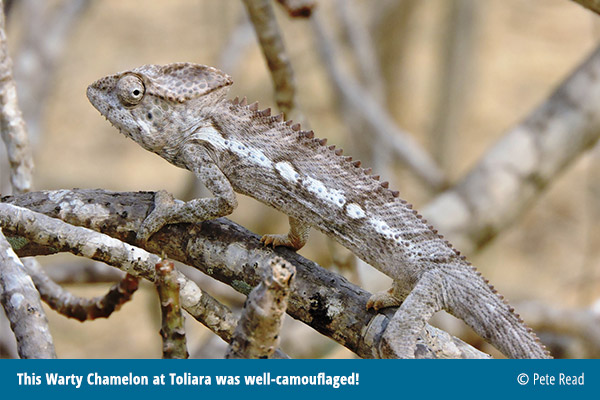 Another highlight in Périnet was the bizarre Giraffe-necked Weevil, and, equally amazing, the way it used strange extension to its “neck”. Other insects resembled small white flowers that could walk along branches or stems when disturbed. And, of course, a multitude of colourful butterflies would flutter by as we walked through the forests where Golden Orb spiders hung enormous webs that might catch the butterflies. 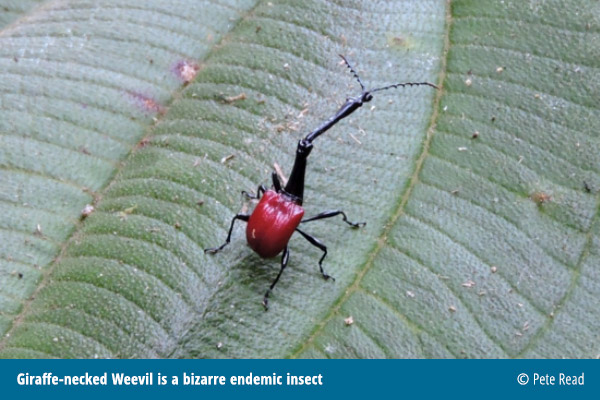 We enjoyed a number of evening hikes and it was hard to pick a single highlight, although finding a Madagascar Kingfisher sleeping in a ball filled me with wonder. Other nocturnal findings included various owls, chameleons, arachnids, frogs, and lemurs. 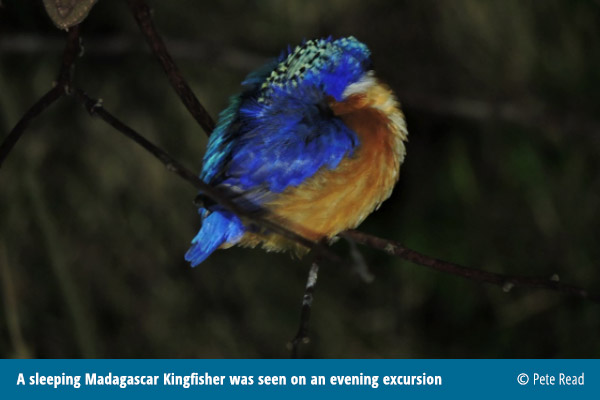 One of the most enjoyable experiences was our visit to ‘Lemur Island’, a rehabilitation centre run by one of the local hotels in Périnet. After seeing these species in the wild we were able to enjoy seeing several species right in front of us, some even climbing about on our shoulders unafraid as they customarily are. 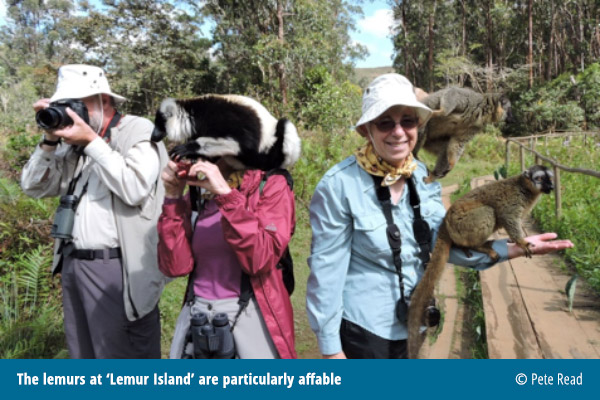 The diversity of the bird life was also very interesting. Several families of birds are found only in Madagascar. One such family is the vanga family, which must have diversified much like the so-called ‘Darwin’s Finches’ of the Galapagos. In their island isolation, the ancestors of the vangas evolved to fill a variety of specific niches. For example, the Sickle-billed Vanga probes crevices in trees with its long curved bill, while the small Ward’s Vanga acts like a flycatcher high in the trees. Many of the bird species in Madagascar resemble mainland African species but are considered ‘Mad species’. Birds such as Madagascar Hoopoe, Madagascar Kestrel, Malagasy Pond-heron look much like their counterparts that you might see elsewhere but they are endemic to the island. Many species are rare or endangered and so we fervently wished for the continued survival of these birds we were so fortunate to observe. It was fun to challenge our observation skills to find all the ‘Mad blue birds’ in Périnet; the Blue Vanga, Blue Pigeon and Blue Coua.

Baobobs are just one of the more interesting plant species found in Madagascar, but they certainly held our interest. Their giant tubby, smooth-skinned trunks and broad, raised branches are lasting testament to the tenacity of all life here, especially in the drier areas of the country. These ancient trees resist fire and deforestation practices and whenever we met one, whether a species in the forest or in the desert, we greeted each behemoth and sometimes gave it a hug or crowded at the base for a group photo with this wondrous tree. 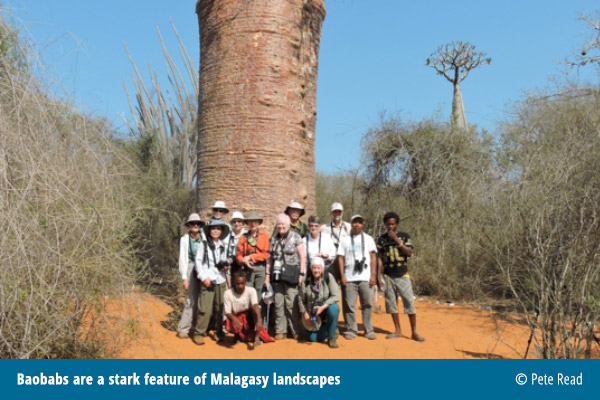 Other interesting plant life included tree ferns, orchids and water-hording Pachypodiums with their swollen bases. Many a colour-neutral rock face in the south-west was generously painted with mosses and lichens, which gave the dry lands even more colourful hues to enjoy. 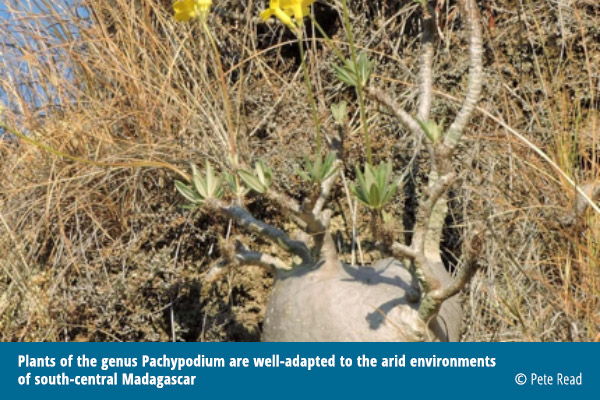 Do not delay your trip to this island of wonder. Come and see what can only be described as some of the most bizarre and unique wildlife in the world. Madagascar is a real evolutionary experiment in isolation and it is worth the time and effort to get there. I can guarantee you will have a Mad time!


Editor’s Note: We're always looking forward to our next trip to Madagascar, click here to view all tours.
Webinar Library