Jacqueline Windh is a PhD geologist who spent nearly two decades working in gold and copper exploration on three continents. In 2000, she moved away from the mining industry and into a field with a gentler imprint on the planet, and since then she has been working as a freelance writer, photographer and broadcaster. As part of that transition, she undertook and completed an MFA in Creative Writing at UBC.

Jackie is author of the Canadian best-seller The Wild Edge as well as three other books. Her articles and photos have been featured in magazines and newspapers around the world, and she has produced radio documentaries for the CBC and elsewhere. She is an enthusiastic speaker who has presented in prestigious venues in Canada and abroad, including a TEDx talk and at the Explorer’s Club in New York. Jackie is an elected Fellow of the Royal Canadian Geo-graphical Society and led an RCGS-sponsored expedition along Vancouver Island's west coast in the summer of 2019.

Jackie has been travelling to Patagonia for two decades in a range of capacities: as a photo-journalist, as a member of scientific research expeditions, and as a naturalist guide. She worked with the indigenous Yagán people of Navarino Island, translating their book of tradi-tional tales, Hai kur mamashu chis, to English. She is a passionate naturalist and an enthusias-tic travel guide. 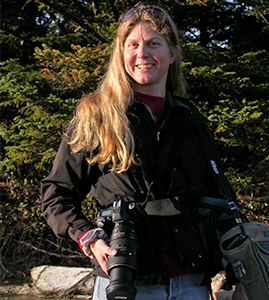