A Three-Toucan Day at Tikal 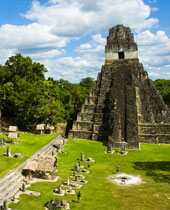 Toucans are a New World family of splendid looking birds whose enormous colourful bills are adapted to eating small berries and other fruit. Seeing all three species of toucans found in Belize and Guatemala was a common goal for the members of our latest tour there in March 2014.

The conspicuous Keel-billed Toucan is the largest of the three, and is the national bird of Belize. We saw Keel-billed Toucans daily and at their best in the early morning or late afternoon, flying in small groups to the top of a large tree where they gleamed in the sun. We also saw the Collared Aracari, a medium-sized toucan with a red, black and yellow front, a fiery red rump and a remarkable jagged bill. They loved the fruit feeders at the lodges where we stayed, and were a frequent sight on our hikes. More elusive in our search was the third species: the Emerald Toucanet. This smallest of the three toucans has stunning lime green body feathers and a large bill with a brilliant yellow stripe.

We would eventually be successful in our goal, but it wasn’t easy. We were in Tikal National Park in Guatemala and we heard that there was an active Emerald Toucanet nest in an old woodpecker hole near Temple 1 in the Gran Plaza (yes, toucans are cavity nesters). We checked the hole several times during the day, but missed seeing the occupant each time. Disappointed, we thought it had eluded us. However, the next day on our early morning walk, two green birds with a large streak of yellow on huge bills flew quickly into some fruiting trees. There in front of us at eye level were two Emerald Toucanets to enjoy. We watched in delight as these handsome birds feasted on small fruit. We will cherish the memory of seeing Emerald Toucanets because they rounded out our three-toucan day, bringing our search to a successful end.

Seeing toucans is just one of many morsels from our Belize and Guatemala tour. Click here to learn more about our next adventure.
Webinar Library