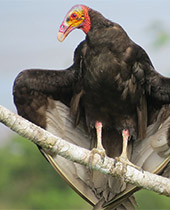 For the last decade-and-a-half I have had the great fortune of working very closely with two fascinating groups of animals: birds and children. You can imagine, then, that I have answered more bird questions than I could possibly count. Some are simple, others are off-the-wall, and I love taking a moment to answer each one thoughtfully and to hopefully satisfy the curiosity of the asker. One of the toughest and most frequent questions I’m asked is “what is your favourite bird”?

I could pose that question to you, reader – what is your favourite bird? There are nearly 11,000 to choose from, and I’d tell you there’s no pressure, but 6-year-olds do not accept waffling or cop-outs. You can’t tell them you love all birds equally, or that it’s just so hard to choose. They demand a definitive answer. Could you pick one?

Fortunately, I’ve had a great deal of time to consider this question over the years, and I have my response all ready to go. I can say with confidence that my favourite bird is not a magnificent raptor, a colourful warbler, or a familiar feeder-visitor. My favourite bird is the Turkey Vulture. 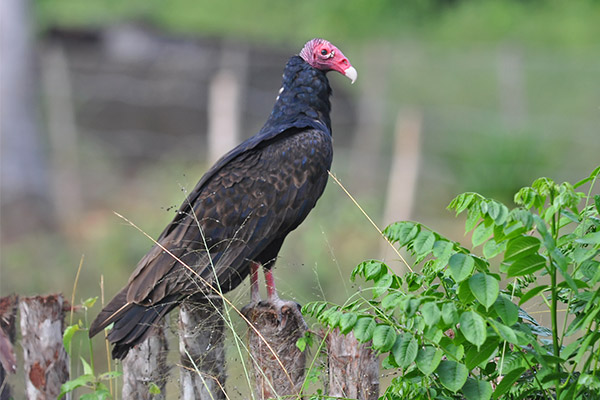 A Turkey Vulture in Cuba
(Photo: Justin Peter)
When I first started working with birds in an educational setting, I met a Turkey Vulture named Socrates. I fell in love with this quirky old bird, but when we would take him out in public people would often comment (quite rudely, I’d say) that he was ugly, creepy, or disgusting. I quickly became a vulture defender, and I spent a great many hours trying to convince detractors that he was the handsome, intelligent, curious, and charismatic bird that I knew him to be.

I think I might be just a bit stubborn, and the fact that people often dislike vultures makes me like them all the more. All over the world vultures get a bad rap, and there’s something inside me that just won’t take this lying down. My affection is not just based in obstinacy, though, as there is much to love about this misunderstood group of birds. Yes, they eat dead things, and that can be a bit gross. But eating dead things is a lifestyle that requires a host of fascinating adaptations and behaviours. It’s what makes these birds unusual, and to my eye, beautiful.

While I love all vultures, I have a particular affinity for those that live in the Americas, usually collectively called the New World [sic] Vultures. They are distinct – both physically and genetically – from the ones in Europe, Africa, and Asia – the so-called Old World [sic] Vultures. While the African, Asian, and European types are the vultures most featured in documentaries and Disney films, the vultures of the Americas are equally fascinating and more accessible to a Canadian birdwatcher like me. There are seven species of vulture that reside between Canada and Chile, and what follows is a brief introduction to the lot.

The Turkey Vulture is the only vulture that regularly resides in Canada. Its long wings, red head, and rocking flight should be familiar to many northern birders, but Turkey Vultures also live as far south as the southern tip of South America. If you vacation in the tropics during winter you may find both resident Turkey Vultures and those who have migrated with you. 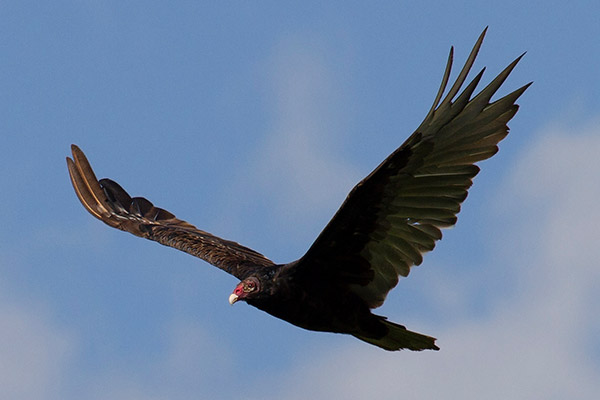 The Turkey Vulture widespread across southern Canada but found all the way down
to the tip of South America
(photo: Kyle Horner)
The Turkey Vulture has an incredible sense of smell, which it uses to locate carrion over considerable distances. This olfactory ability is rare in birds, though perhaps not as rare is it once seemed. For years, scientists believed that the smaller Black Vulture smelled poorly, and found its food mostly by following its larger cousin. New research shows that Black Vultures share the Turkey Vulture’s sensory gift, as do at least a few others in this family. 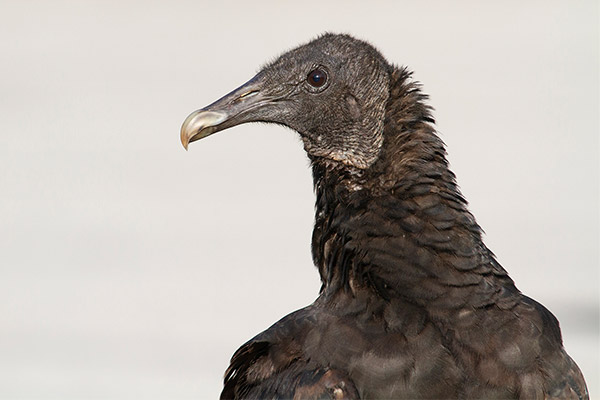 The Black Vulture can be distinguished from the Turkey Vulture by its all-dark facial skin.
(photo: Kyle Horner)
Black Vultures live alongside Turkey Vultures in all but the coldest parts of their range. They can be distinguished by their stockier shape, black head, snappier wingbeats, and flat wing profile while soaring (as opposed to the Turkey Vulture’s V-shaped dihedral). They are perhaps the most opportunistic scavengers in this family and will happily feed at dumps and garbage bins on things a self-respecting Turkey Vulture wouldn’t touch. They’re mischievous too, and are perfectly at home marauding across a parking lot ripping rubbery bits off of unprotected cars. 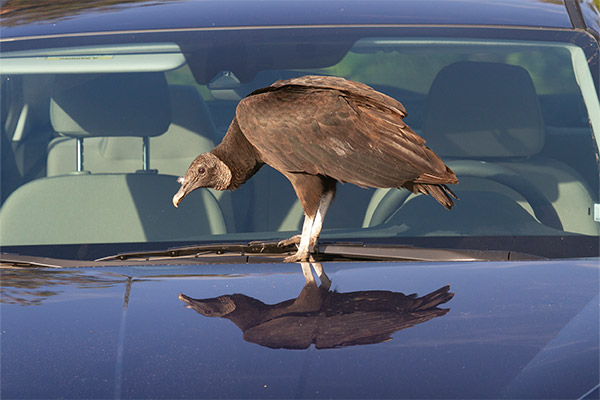 t
A Black Vulture investigating a car for loose parts
(photo: Kyle Horner)
In contrast to the ubiquitous Turkey and Black Vultures is the rarest bird in this group, and its only other member north of Mexico: the California Condor. This massive vulture can only be found in the American southwest, from which it nearly disappeared in the middle of last century. Agricultural pesticides and lead poisoning from hunting ammunition were the primary causes of a decline so drastic it reduced their population to 27 individuals. 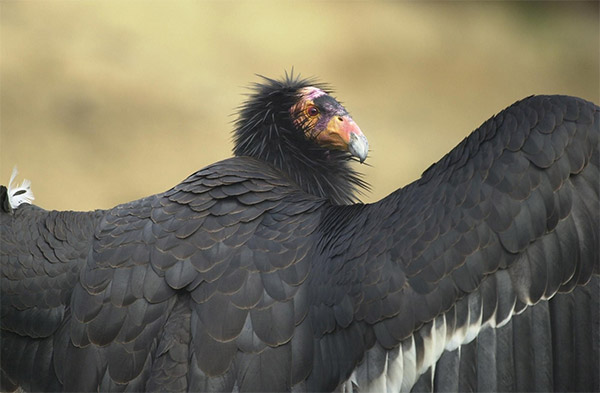 California Condor
Conservation efforts have saved the condor but there are still only around 300 living in the wild today and seeing one should be on every bird lover’s bucket-list. The immense size and white-blazed underwings of this bird make it unmistakable.

To encounter the remaining four vultures in this family you’d need to travel to more tropical climes. Its most striking representative – the King Vulture – lives from central Mexico through much of South

America. I would boldly submit this bird as the most beautiful vulture in the world, remarkable for its atypically white plumage, matching white eye, and colourful facial adornments. 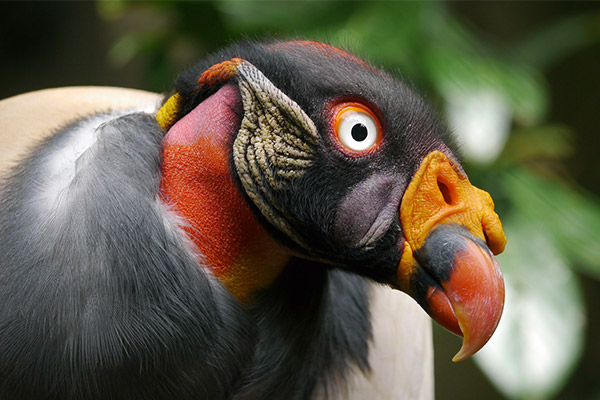 Close-up of King Vulture
The source of its regal name is unclear, but it may relate to its habit of flying high to watch its smaller cousins, then following them to the meals they detect. Upon arriving at a carcass the King Vulture seems to take charge, and weaker scavengers often wait for it to tear into the hide of the animal with its powerful beak. 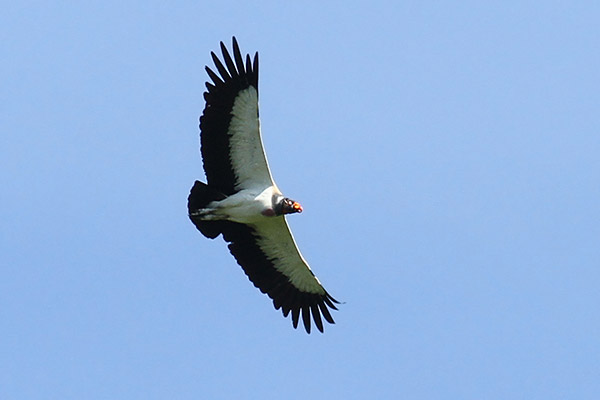 The pale body plumage of an adult King Vulture make it immediately recognizable
(photo: Kyle Horner)
Closely mirroring the range of the King Vulture is the Lesser Yellow-headed Vulture. At first glance this bird would be easily mistaken for the similar Turkey Vulture, as at a distance its characteristic yellow face and bluish crown are difficult to see. 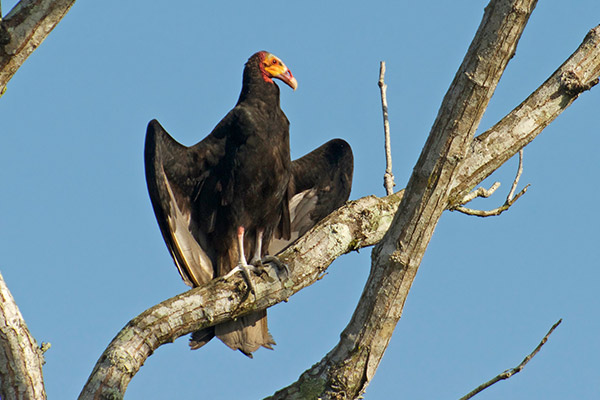 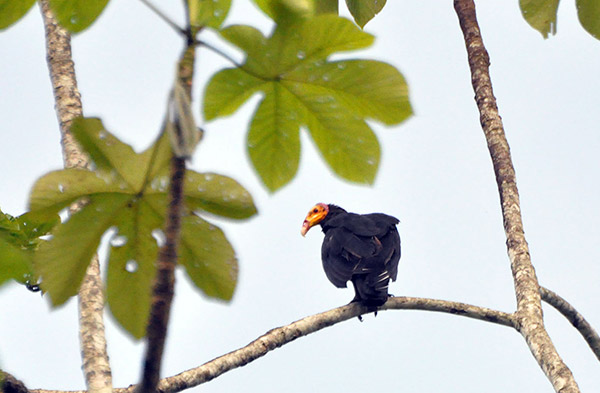 Greater Yellow-headed Vulture
(photo: Don Faulkner)
Another species is the Greater Yellow-headed Vulture, which lives only in South America and is very similar to both the Turkey Vulture and its Lesser counterpart. It is larger and heavier than the latter, and notably has a strong preference for rainforest habitats in contrast to the Lesser’s love of open country. It is slightly larger than the Turkey Vulture too, but telling the two apart can be very challenging – a close look at the head colour is your best bet.

Andean Condors in Chilean Patagonia
(Photo: Justin Peter)
Last and most southerly among the vultures of the Americas is the formidable Andean Condor. This behemoth is among the very largest flying birds in the world, and as its name suggests, it makes its home among the Andes from Venezuela to Chile. This mountainous and coastal habitat provides plenty of powerful air currents to keep the condor’s bulky body aloft, and it takes advantage of these favourable winds as it glides long distances in search of the carcasses of large animals. This legendary bird is a national symbol for at least five South American countries, and in my opinion deserves a place at the top of every birder’s must-see list. 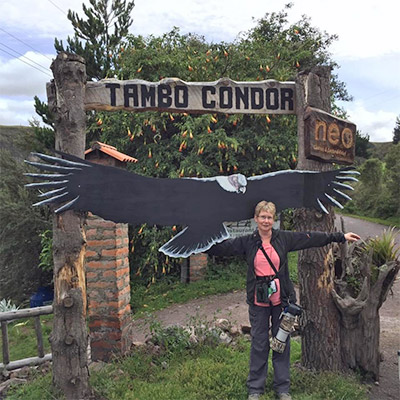 A Quest traveller in Ecuador beside a life-sized Andean Vulture cut-out.
She did see a real condor!
(photo: Justin Peter)
If – as travel resumes in a post-pandemic world – you are planning a trip to a destination in the Americas, keep your eyes peeled for the enigmatic and ever-present vultures when you get there. I know that not everyone will choose a vulture as their answer to the “favourite bird” question, and that’s OK. But I hope that by sharing a little vulture-love, I can convince some doubters to take a second look at this remarkable group of birds. I’d be doing Socrates a disservice if I did any less.

You can see some of the above vultures on these upcoming tours: