Temple of Artemis, Ephesus: On the original bucket list 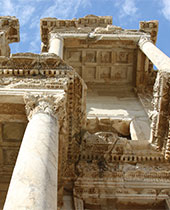 The foundation myth of Ephesus remains a mystery. Some scholars posit that the site was founded in the 10thC BCE by a prince of Athens named Androklos who had to flee his country after the death of this father. Other historians have attributed the mythological foundation to Ephos, queen of the Amazons.

The first temple was built in the second half of the 8th century BCE, thought to have been the earliest example of a Greek temple surrounded by colonnades. The early temple was dedicated to Artemis, the daughter of Zeus and Leto and twin sister of the god Apollo. She is associated with both hunting and nurturing, as the goddess of hunting and wild animals and the goddess of childbirth and nature. 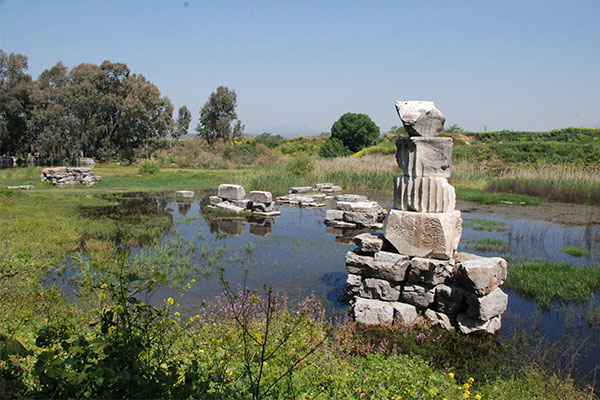 Ephesus Temple of Artemis
The temple was destroyed by flood in the 7th century and rebuilt in around 550 BCE. This was possibly the first Greek temple built of marble.

The temple was again destroyed in 356 BCE in mysterious circumstances (possibly by an arsonist who set the wooden roof beams alight, possibly by lightning, or possibly by city planners who wanted to rebuild the temple in another location but dared not destroy a religious building – does anything change?) 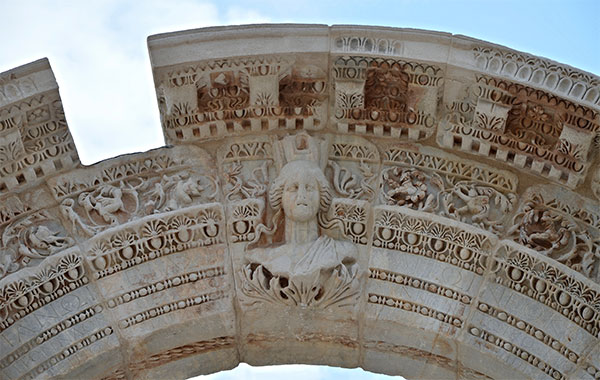 Curved arch decorated with floral patterns and bearing a relief of Tyche,
the goddess of victory, at the Temple of Hadrian, Ephesus
The Ephesians rebuilt their temple again in about 330 BCE. This third version of the temple was 137m long by 69m wide and had more than 127 columns. Literary sources of the time describe works of sculpture and painting adorning the temple with the columns gilded in gold and silver. The temple survived for 600 years, appearing many times in early Christian accounts of Ephesus and in Roman edicts. In 268 AD the temple was damaged by the invading Goths and eventually destroyed by the Christian in the mid 5th century AD, who also erased the name of Artemis from inscriptions around the city.

Where once the greatest temple in the Ancient Mediterranean stood, today only the foundations and a solitary column erected from composite fragments remain. 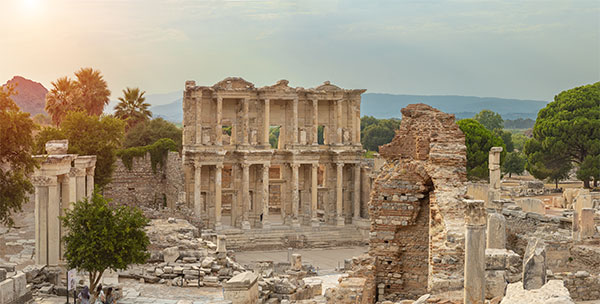 Library of Celsus in Ephesus 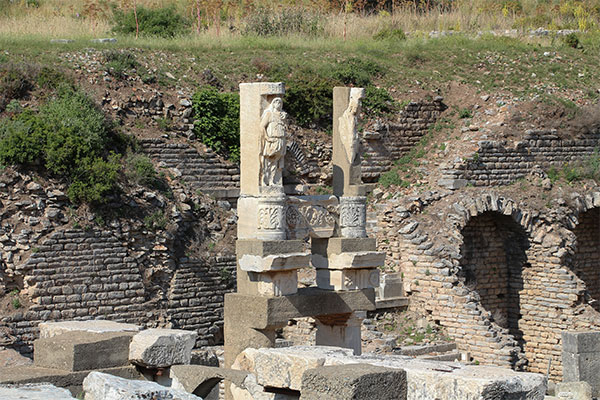 Temple of Domitian at Ephesus
You can visit this evocative site on our trip to Turkey in fall 2022. We’ll be staying by the sea in Kusadasi to visit Ephesus, just before boarding our fully chartered gulet for a five-day cruise on the Turquoise Coast.