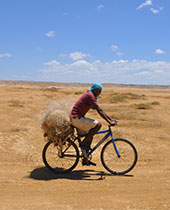 The geographic diversity of Colombia hides a surprising habitat. While the natural cover in much of the country consists of lush forests, one area stands in remarkable contrast. East of the bustling cities of Barranquilla and Cartagena, in the extreme north of the country near the Venezuela border and jutting into the Caribbean Sea, lies the Guajira Peninsula (pronounced Waheera). 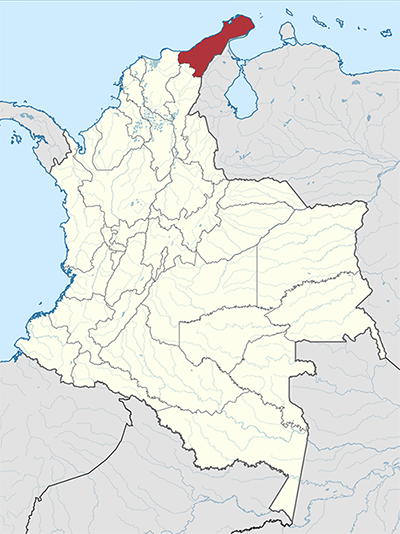 The Guajira Peninsula in red
Around 90% of the peninsula belongs to Colombia, while the eastern edge of it is part of Venezuela. As one travels eastbound along the coast beyond the Santa Marta mountains and Tayrona National Park, verdant forests are gradually replaced with arid scrub and thorny cacti, contrasting with lush mangrove stands that line the coast. Much of the Guajira Peninsula consists of desert ecosystems, and the area is referred to as El Desierto de La Guajira – the Guajira Desert. 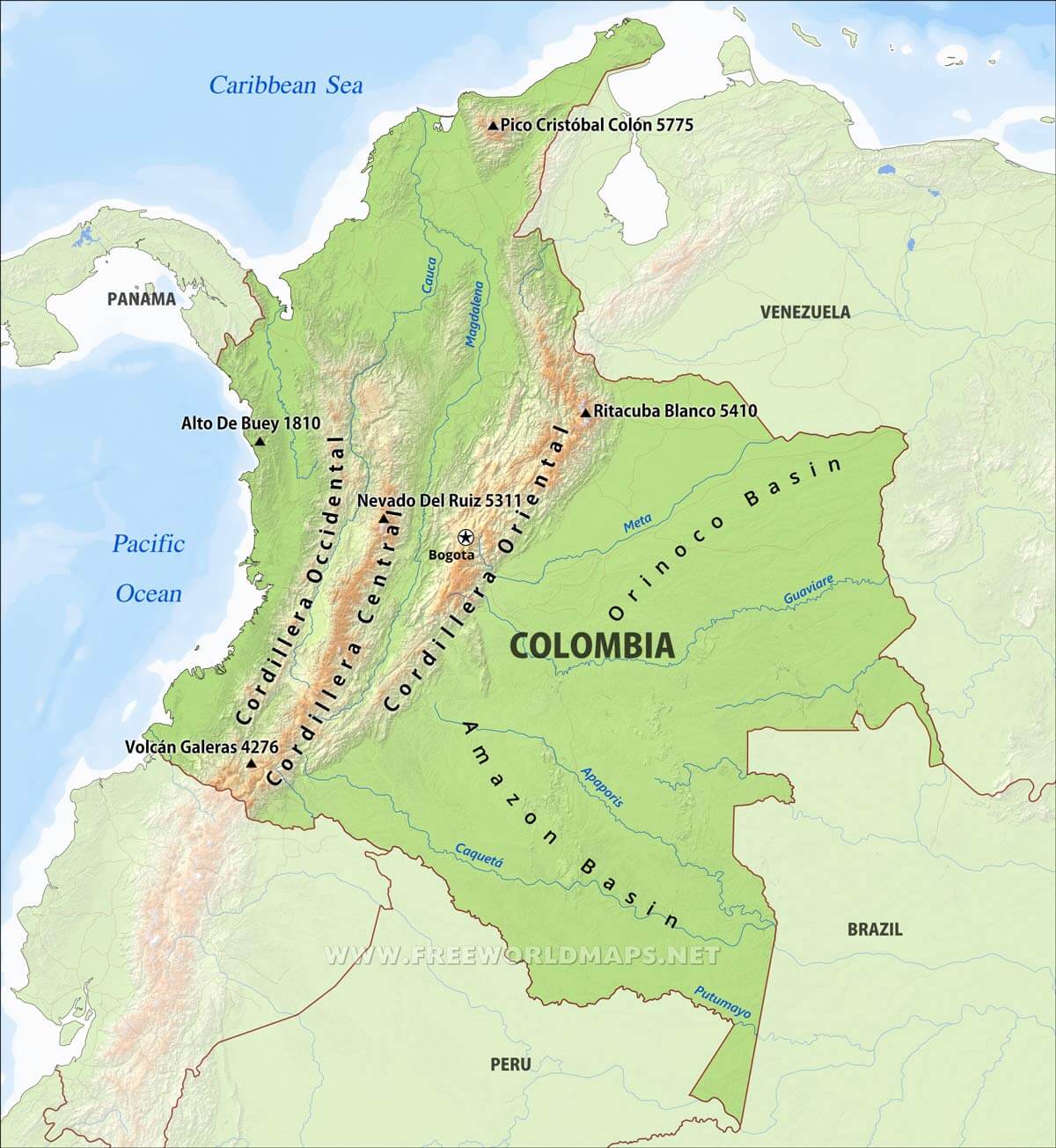 Map of Colombia showing its regions
How does a desert form in such close proximity to the humid, tropical forests that Colombia is known for? The answer comes down to geography. The trade winds blow from the northeast to the southwest over the north coast of South America. These moist winds pass over the Guajira Peninsula, shared between Colombia and Venezuela, and the Paraguaná Peninsula which is found a little further east in Venezuela. As there are no geomorphological obstacles such as hills or mountains, the winds continue moving through and hold on to their moisture. Eventually, the trade winds encounter several mountain ranges – Sierra Nevada de Santa Marta in Colombia, Sierra de Perijá along the Colombia Venezuela border, and the Cordillera de Mérida in Venezuela. The air rises, condenses, and produces rainfall on these mountain slopes. The Sierra Nevada de Santa Marta receives over 3,000 mm of rainfall, yet the adjacent coastal peninsulas of Guajira and Paraguaná experience less than 300 mm! 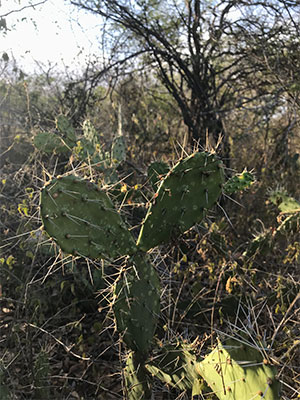 A wide variety of cacti persist in the Guajira Desert, such as this prickly-pear (Opuntia sp.) 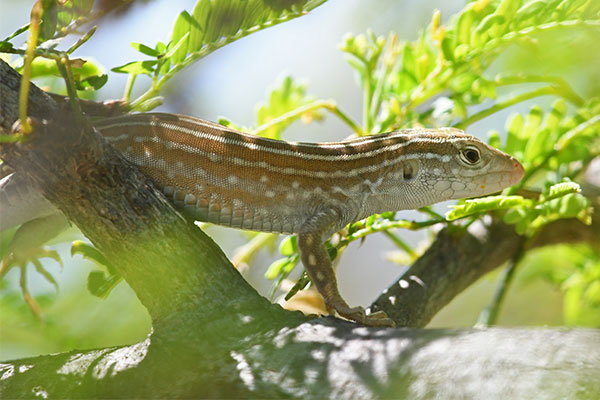 The Gaige’s Rainbow Lizard is one of many species that call the Guajira Peninsula home.
Of course, there is variation in the landscapes of La Guajira – it is not just sand and monotonous scrub. Just as tropical humid forests show a great deal of diversity in their form and species composition, the same can be said with desert ecosystems (especially those deserts that receive a few hundred mm of rain annually). A patchwork of diverse vegetation types can be found in La Guajira: tree cactus stands, sometimes with a grassy understory and sometimes not; desert woodlands dominated by thorny Trujillo or Brazilwood trees; extensive saline flats; and much more. 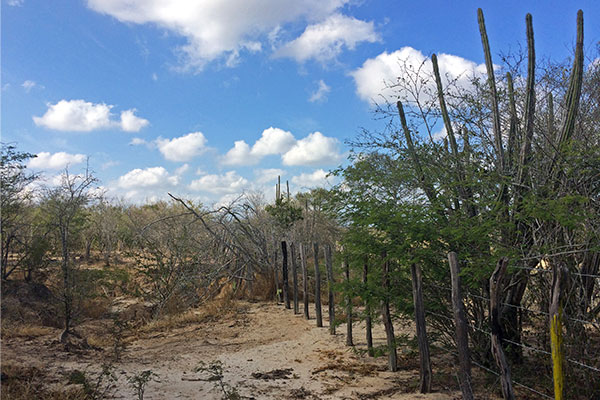 A typical landscape scene near the town of Camarones, featuring
organ pipe cacti and trujillo trees
During our Quest Colombia tour we visit the Guajira Peninsula and explore the flora, fauna and culture of the area along with our local Wayuu guide. Like any desert ecosystem, dawn is the most productive time of the day to search for wildlife before the heat of the day takes over. We spend an early morning near the town of Camarones, exploring along tracks that penetrate deep into Trujillo scrub woodland. 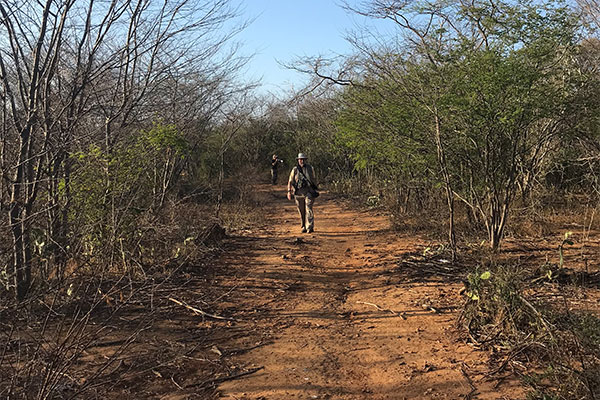 During the cooler, early hours of the morning, we walk along paths that
probe deep into the desert landscape.
As the sun rises, the landscape is filled with the songs of nearly every bird species found here. Quite a few of them, such as the impossibly vibrant Vermilion Cardinals, are only found in this dry region of northern Colombia and northwestern Venezuela. 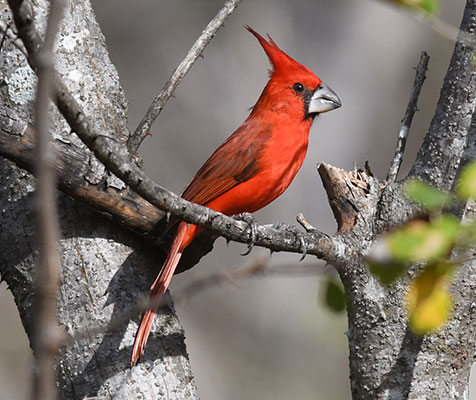 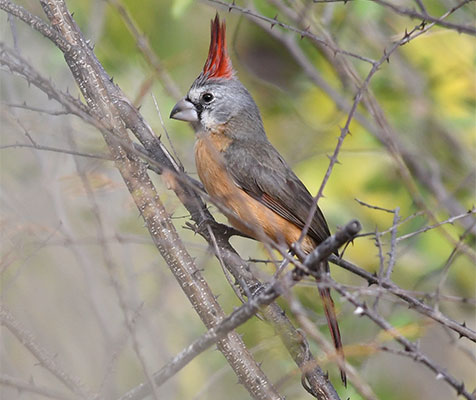 Female Vermilion Cardinal may lack some of the colour of the males,
but they are an equally spectacular bird.
Buffy Hummingbirds somehow manage to find enough flowering plants to stay satiated, while all kinds of different songbirds including various antbirds, spinetails, flycatchers and wrens skulk among the thorny shrubs. Geckos and rainbow lizards scamper from beside the paths, Yellow Orioles add a jolt of colour to the landscape and sharp Orinocan Saltators sing from prominent snags. For a few hours around sunrise, the landscape comes alive and it is a treat for the senses. 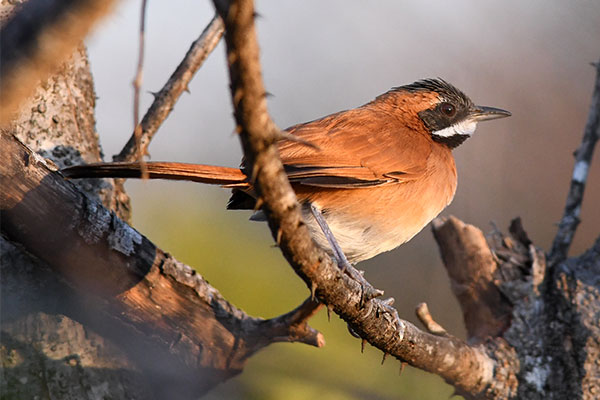 White-whiskered Spinetail: Not all birds that skulk in the undergrowth are drab!
This striking species can be sought in the Camarones area of the Guajira Desert.
As the temperatures rise and the birdsong starts to diminish, we make our way over to a productive estuary teeming with waterbirds. With the aid of our spotting scopes, we can enjoy hundreds of shorebirds, herons, egrets, ibises and terns. American Flamingos are often found in this lagoon, while an occasional Scarlet Ibis joins the ranks of White Ibis. Sometimes, hybrid White-Scarlet Ibises can be found (also known as Pink Ibises). 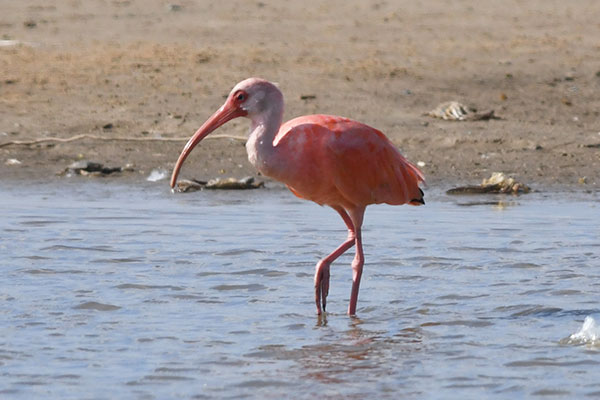 This “Pink Ibis” is a hybrid between White and Scarlet Ibises, and occasional
individuals can be found in coastal lagoons of the Guajira Desert.
This estuary is located beside the village of Camarones which is home to Wayuu people. It is said that the Wayuu are the largest surviving indigenous group in Colombia. The Spanish were never able to subjugate these fiercely independent people, and to this day the Wayuu in La Guajira function mostly independently from the rest of the country. Despite the human presence, La Guajira is in remarkable ecological condition, in part because major industry is not present in the south Guajira Peninsula. 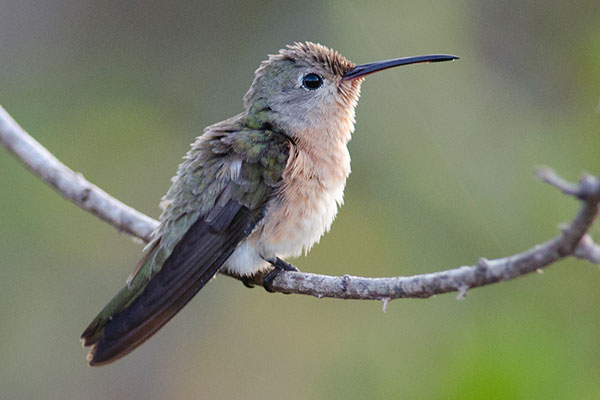 The Buffy Hummingbird is one of the few hummingbird species that can eke out a living in the harsh desert landscapes. This range-restricted species is one of the “Guajira specialties”
The desert landscapes of La Guajira provide a marked contrast to the rest of the country, with completely different bird, plant and animal life that have unique adaptations to survive in a harsh environment. While many naturalists and ecotourists visit Colombia for the hummingbirds, tanagers and mega-diverse montane ecosystems, a visit to La Guajira adds another element; trust me when I say that you will fall in love with the beauty of La Guajira. 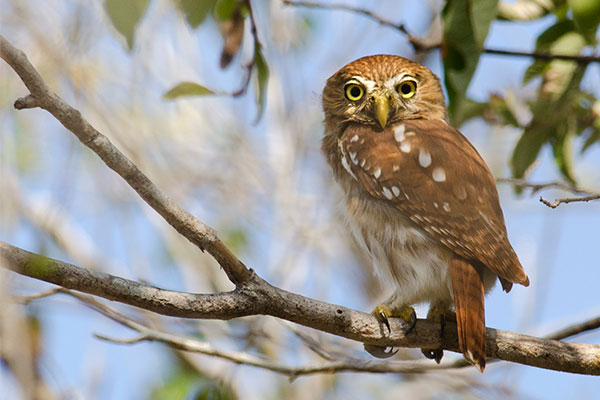 Ferruginous Pygmy Owl: This species is active by day, hunting lizards and small
birds among the thorny habitats of the Guajira Desert.
We look forward to exploring the desert environment at La Guajira during our next Quest Nature Tours adventure to Colombia in February 2022.
Webinar Library