The Giant of the Amazon Backwaters 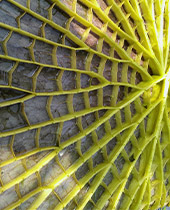 Somewhere in my distant childhood memories is a black-and-white image of a small child resting on top of a huge leaf floating on water inside a raised water tank. The image was a Disney’s children’s book showing amazing plants and the plant in question was an otherworldly one with the fittingly fantastic name of Victoria amazonica. Although I would later learn that some such antique images might have been staged with supporting props, the plant has since been shown capable of impressive supporting abilities. Known commonly in English as the Giant Water-lily, this plant is one I had always wished to see with my own eyes. While this plant is apparently popular in fine botanical collections, my first sighting of this behemoth was in February 2020 when I cruised the Peruvian Amazon! It would be a chance to marvel at the plant itself and also come to appreciate the survival challenges that plants can face.

Exacting in its habitat requirements

The Giant Water-lily is found throughout a large part of tropical South America. While it can grow in waters up to several feet deep, it can’t just grow in any body of water. Fast-flowing waters in large river channels may carry its seeds, but it requires calmer waters in order to establish and thrive. 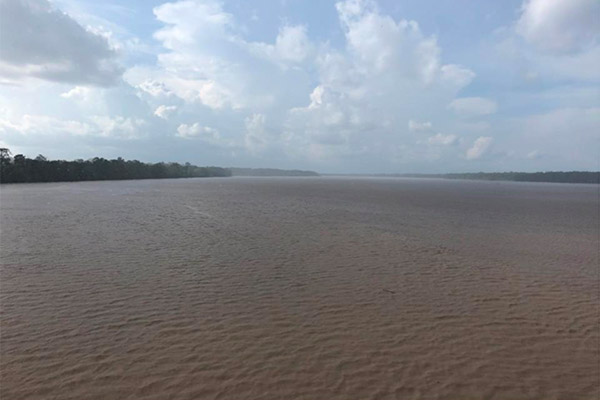 The clouded water in a large channel such as this one is too fast-flowing
to allow ready establishment of Giant Water-lily and other plants with
similar requirements. We must look elsewhere.
© Justin Peter 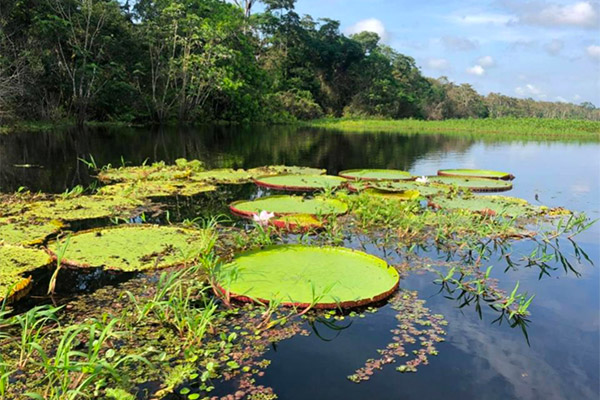 Instead, one must venture into sunlit backwater channels and oxbow lakes to find them. With leaves measuring up to a little over 3 metres in diameter extending from a rhizome anchored in the soil below, it is supremely adapted to soak up the strong tropical rays of the sun.
Dinner-plate blossoms ensuring genetic diversity? 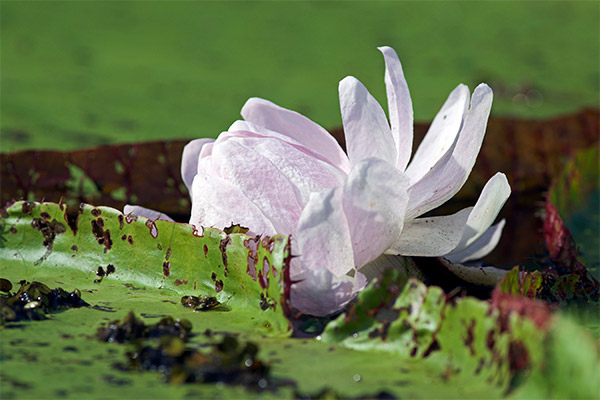 A blossom in the morning, closing after its second night of bloom.
© Justin Peter
The Giant Water-lily has appropriately large flowers, but for all the effort in making them, the blooms apparently last only two nights or so. On the first night of full bloom, they are white and radiate a pleasant aroma that attracts insects, notably a species of scarab beetle (Cylocephata castaneal) that specializes in them. Ideally, the beetle arrives coated with pollen from another Giant Water-lily flower. At this time, the male flower parts are shielded and are not yet shedding pollen so the flower isn’t pollinating itself. The floweris functionally female. 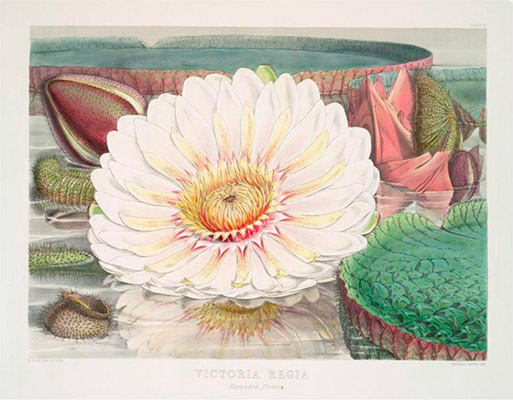 Illustration of a fully-opened Giant Water-lily (then known as Victoria regia).
© Walter Hood Fitch (1851)
Lingering beetles may inadvertently become imprisoned in the flower when it shuts the next morning. By the time the flower opens for its second and final night of bloom, it has turned pink, and is now a functionally male flower; that is, its male parts are now shedding pollen freely. Apparently, the female parts are still receptive but we might assume they’ve already been fertilized by pollen from elsewhere. The freshly released scarab beetles can now take this flower’s pollen to another flower that will open white and fresh later in the day! It would seem an effective strategy in ensuring genetic diversity. After the seeds have developed, they will float away with the gentle currents and the successful ones will establish in a backwaters area elsewhere.

Being a big green solar panel has its perils!

Images of Giant Water-lily in botanical gardens depict their leaves as flawless. That is not necessarily the case in the wild as I discovered, since all but the youngest leaves seemed heavily pockmarked by what I assumed are chewing insects. Many plants employ chemical means to discourage insect attack, but if Giant Water-lily employs such means, it was not readily apparent, or at least, they are ineffective at maintaining a pristine leaf surface. 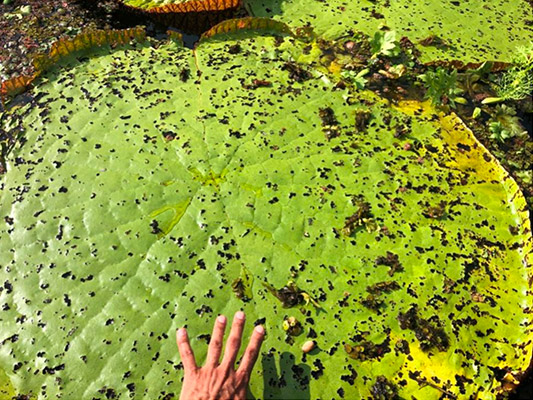 A heavily browsed Giant Water-lily leaf pad with my hand for scale.
© Justin Peter
With all of the holes, there is no way that most of their leaves could actually support a light-weight human! That may not matter in the greater scheme of things since the overwhelming majority of the leaves’ surfaces were intact and photosynthesizing for the benefit of the plant. Plus, they do support some other conspicuous wildlife with no issues whatsoever! 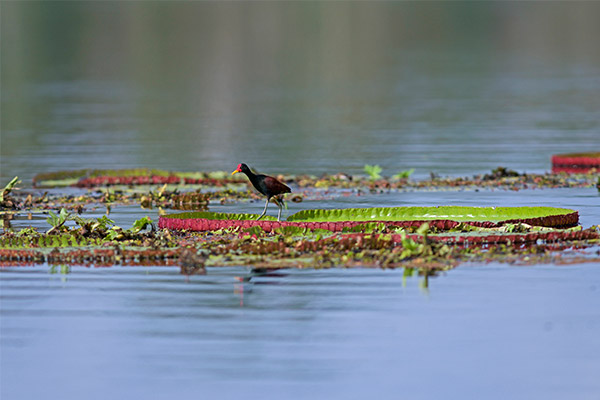 A Wattled Jaçana ably walking across a fresher Giant Water-lily leaf.
The cleft in the leaf border behind the bird allows rainwater to drain off the leaf surface.
© Justin Peter
While the plant’s chemical defenses to smaller browsers might be questionable, they do employ effective mechanical defenses against larger predators. The leaves are armed with big spines arranged in rows that radiate from the leaf’s centre. These appear to prevent fish and presumably a more formidable browser - the Amazonian Manatee - which dwells in backwaters and consumes large amounts of fodder – from approaching. 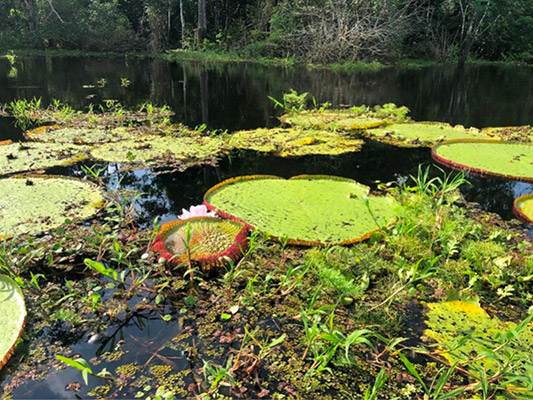 Note new leaf unfurling in front of the blossom, and the rows that bear spines showing.
© Justin Peter 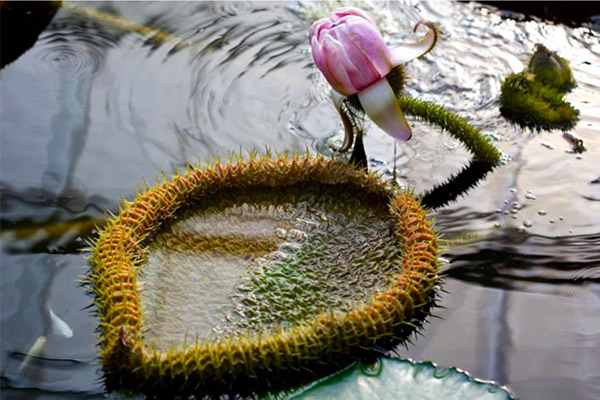 A close-up photo from a botanical garden shows new leaf unfurling with the spines.
Note that the flower stalk is also laden with spines!
© Laitr Keiows, wikicommons
For as high a profile as this plant has, I was surprised by how much of its natural history remains murky. The plant is technically a perennial, so the rootstock can live for multiple years. It has been suggested however that because of the wildly fluctuating water levels in the places it lives, that it might also be an annual plant, capable of completing a life cycle from seed to seed — and growing to gargantuan dimensions — in just one growing season. If that is the case, then it will be another reason to be impressed! 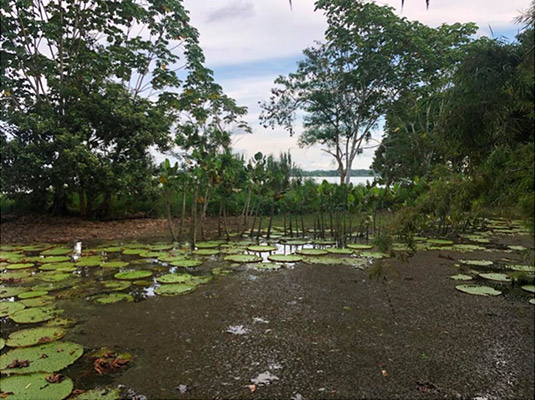 Giant Water-lilies in a backwater pond whose level rises when water when
the river (at rear) floods its banks. Will they be here next year?
© Justin Peter
The Giant Water-lily is just one of many thousands of plants making a living in the tropical rainforests of South America. Even so, its conspicuous nature and aquatic habits make it a poster-child for the wonderful annual cycle of high and low water that all the region’s inhabitants face.
We look forward to seeing Victoria amazonica and so much more during our
Amazon Rainforest Expedition Cruise in February 2023. Click here to learn more.
Webinar Library